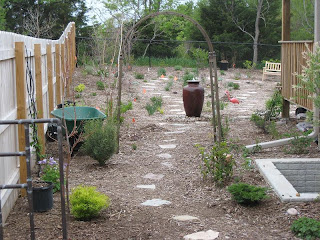 This will not be a super detailed how to guide with pictures along the way, because along the way I got a little angry and frustrated and couldn't stop until I was done with the beast. The project shouldn't have lasted 6-7 hours, but it did.

If you do a little bit of research online, you'll see there are two basic ways to install such a fountain: dig a hole, put some liner in, cinder block to hold the pot or stone, insert pump, backfill with rock; or, dig the hole, put in a pre made plastic tub, put in cinder blocks to hold weight, put a black plastic grate on top of that, then a fine mesh layer to catch debris, then cover with rocks (don't forget to cut off a corner of the grate to get at the pump). Get that?

You are nuts to try option one--how long would it take you to get to the pump for cleaning or winter storage? And wouldn't the mesh help keep stuff away from the pump (am I dreaming?). So, I went with option two. The problem for me was that once I put the pot on top of the grate, it was quickly obvious there was not enough support to keep the pot from wobbling--even with one, then two cinder blocks beneath (the plastic grate isn't reinforced like it should be). Once I removed the grate and put the pot directly on the cinders, it was stable--and once I shimmed the pot, as it wasn't even level on the bottom! (You might not have this problem if you used a large square-based stone. BTW, getting a drilled stone about 3' tall would run you around $600 in Lincoln comma Nebraska. $300 at least for the stone, then $10 per inch to drill a hole; and this is still cheaper than buying the complete deal at a nursery or landscaper. Way outa' my price range.)

So, went to Home Depot and bought two 12" square cement steppers. Cut a 12" square hole through the grate with a saw so the steppers could fit in, giving height to the vase-shaped pot (wanted to keep the vase shape, not be buried by rock if I had just cut a round hole in the grate so the pot would sit directly on the cinder blocks). Then, I put the pot on the two steppers, which were on top of the cinder blocks. Voila.

That was harder than leveling the plastic basin on a very slight incline, and making sure the whole thing was an inch or two above grade, as an area nearby floods and holds water in a very heavy rain.

The next day after install a grackle perched on the fountain's lip and took a drink. Yes! Too bad it was a grackle.

This is not a regular pot--it is cast concrete with a covered top, which has a hole where you can screw in different fountain heads if you choose. A hose runs out the bottom (or out the side, has two holes), and connects to the pump. It's pretty heavy, and I had to move it 20 times while my wife and I figured out how to make the thing stable (it IS Nebraska = much wind). I thought about getting a regular planter, but didn't want to mess with more than I had to--like cutting pvc pipe, finding a way to secure it to the pot's bottom, dealing with leaks, et cetera.

I think it looks pretty nifty, and if it attracts more birds, cool. Right now it's on an extension cord and timer, plugged in to a gfi on the deck, but I've read it's safer to have an electrician come and install an outlet right by the fountain. $$$ 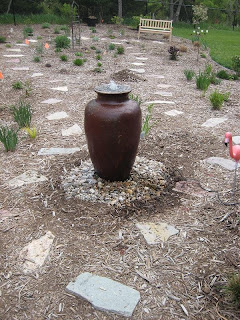 And, as an aside to this long post--I'll soon be taking a moderate hiatus from blogging to live my life for a bit (boy it's consuming)--enjoy the below pics of the incredible plum / eggplant colored smokebush leaves (royal purple), the leaves of dappled willow on a stick (a real one purchased from a real nursery), and a mourning dove watching me pull weeds. 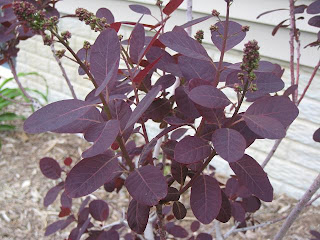 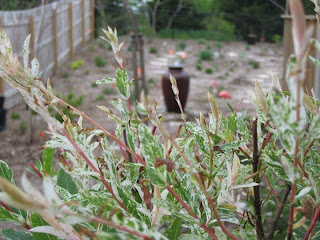 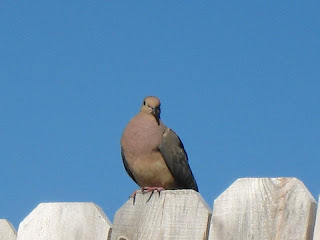 It does indeed look nifty! That was quite a process....too funny that a grackle was your first visitor! We expect Hawks or at least Cardinals!

The Dove against sky is splendid!

Do I ever get the blogging takes a lot of time! Have a wonderful rest and time living your life!

Well, I think the fountain looks great! What an effort, but well worth it. Hopefully you'll feel that way too once you can forget about the endless labor involved. is your school out yet? Maybe instead of just taking a vacation from blogging, you all can take a little vacation, period. But whatever you do, enjoy yourself!

Good bye, Benjamin, we will await your return to the blogdom, refreshed and reinvigorated to snap, type and click. Your fountain looks fantastic, as does the whole set up. Is that gravel on the paths, or mulch? I am very much into gravel at the moment.
Frances

Good to see you now have a pot to glisten.

It looks as good as a drilled stone fountain. Maybe a bit more formal but who cares as long as water flows and birds sing.

Have a good break.

Gail--Yeah, cardinals, no fooling! Maybe they come early in the morning.
OFB--Yes, this was the first week sans school. We're visiting some family, so that's our vacation. Then when we get back, conferences, and a dissertation to write.
Frances--Nope, it's mulch. I was thinking of trying pea gravel in the east garden, but need more organic matter in my clay, plus gravel seems harder to keep looking nice. But I too like thr gravel look. And, I'll be back in a few weeks, just too much other stuff coming up in the near future.
WA--Yeah, it is a bit formal. I really wanted that more natural look, but we've now succeeded in commercializng nature so much whine whine whine. I need to drive out to the hills, find a rock, and rent a drill. That sounded creepy.

I know that feeling - every project around here takes three times as long as we think it should. Your fountain turned out great though. Enjoy your break!

This is all the trend now and you accomplished it nicely.

I for one will miss your posts... but can't wait until you come back to blogging all rested, rejuvenated, and without the dissertation breathing down your neck.

Nice job on the fountain! I bet that will help you and your wife with some relaxation once you get back home from your trip, too. :)

I think you probably qualify for the 'Equipment Manager' title! That along with 'Head Horticulturist'! Blogging does take some time so go and enjoy and when you come back, show us this fountain (beautiful) once again, with all the flora and fauna surrounding it!

Oh, it looks so nice, Ben - but I can understand your frustration. It took two men and one woman several days to get our stone disappearing fountain in place.

With the stone block we never had to worry about stability, even in a Texas wind.

Our 2-foot tall block of Lueders stone cost about $300 and came pre-drilled from the Water Garden store - not cheap - but not as high as the prices you found.

We've had grackles, too - but also had goldfinches for the first time!

See you after your break~

Annie at the Transplantable Rose

MMD--Thanks. It seems even the small stuff takes a long time--digging in a plu one comes across thick tree roots, for example. But it's ok in the end, it's worth it.
Tina--Oh no, I'm trendy?! I may have to spray it in pink now and put a christmas tree on it. (sarcasm)
Kim--Hey, I'm not dying! But even if I'm only away a few weeks, my diss will be with me through next spring. But I am gonna try to get it restarted again, get some rhythm going this summer, finish research, stay inside and work....
Layanee--Oh yes, it's only amatter of time before the whole garden leaps up 3 feet, isn't it? My first year is exciting. And thanks for the titles--are you giving me them so I Can do work for you, too? :) The other day I replaced a board in the fence, hammered out the nails and reused them in the new board. I felt very handy, indeed.
Annie--Maybe there's just not much stone in NE and so it costs a lot? I was happy I didn't have to adjust the flow or anything, it started up perfect, which I think I earned. Very happy with it.

You know, I had come by and saw this post - just haven't been leaving alot of comments lately. You did a great job - it really looks beautiful.

Now my fountain dilemma is one of scale. I have an acre, my house is on stilts (about 15' off the ground) and I have six HUGE live oaks. There aren't many intimate spaces in my garden, and I'm worried that a smaller (aka shorter) fountain will get lost. Now, I have a nice grassy area, an oval more or less, that is surrounded by live oaks and camellias, etc - and I'm thinking that within that grassy area that I could make a small patio that the fountain would sit on, then chairs around it. It would have to have some height or it would look goofy. Oh, I don't know. I just want that big giant green head, truth be told.

Well Pam, I'd go for something big then--I think you're right on that for sure. Get some good garden drama going. You can always take your time, build a mound, sculpt a head, and dig a hole for a small wading pool.

Looks great. Ours is a major tale 'o woe. Purchased two mill stones for real cheap and tried to jury rig a fountain ourselves. The combination bucket/liner leaked constantly and we couldn't manage to keep the muck and leaves out of the bottom. The pump clogged constantly.

After two years of swearing at our "calming fountain" we consulted water garden experts. Our set-up is a Rubbermaid stock tank (40 gal) with two millstones resting atop PVC sewer pipes. We built a cage out of hardwear fabric, upon which we placed the rocks.

Oh, did I mention that the whole set up is on a 20 degree grade? Good times. We run it off a GFP plug on our porch too. No problems and so far, we haven't had to fill it up since we filled it three weeks ago.

Good luck with yours!