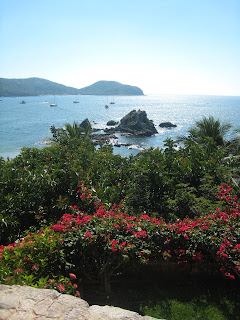 We spent much of our time in our room, or on the beach just steps below us from the cliffs we were perched on. I got sick over the weekend, but we still had a few very good days just relaxing in the Pacific or our very own 12x6' pool. So, following are pics, with some description. Later, after I'm done lesson planning and making syllabi and handouts for my class (school starts Monday), I will RANT RANT RANT about the 15.5 hour trip back home, the Mexican molesting of our baggage, and the false sense of security the ridiculous U.S. customs in Houston provides. But, good first.
There will be many pictures of the bay in Zihuatanejo, MX (no, we did not see Andy or Red--stop asking). Our views were just KILLER. We stayed in one of two private villas next door to our main hotel, Casa Que Canta. No one from the hotel is allowed to visit our villa, but we can visit and use the hotel. Four rooms in our villa, all attended to by a private butler/waiter, chef, and concierge, plus lots of women sweeping day and night and men scrapping rust off of the chain link fence down by Playa la Ropa (the beach's name). Below is a look back toward the more architectural villa next to ours (our patio umbrella is to the left of the left sail's tip--get that?). Then there are some views of our room, in and out. 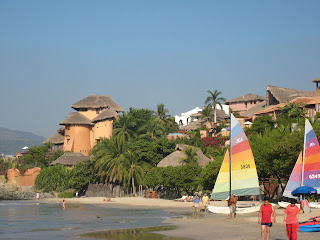 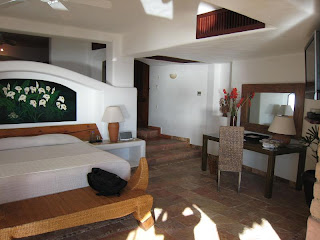 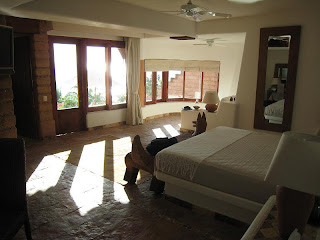 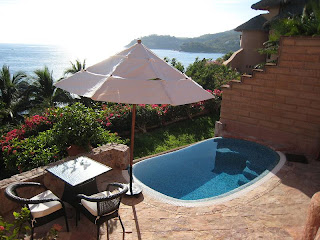 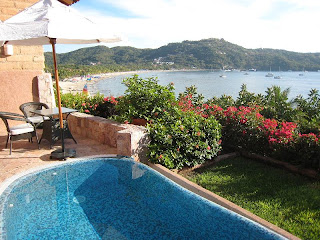 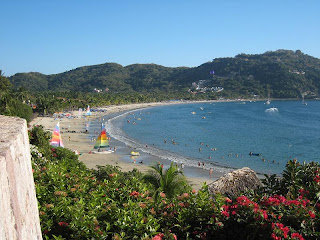 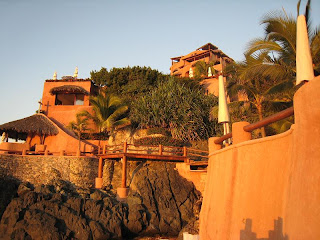 This is a view of the main hotel from down by the rocky shore. Here, I had arranged a special private dinner on a private patio just feet above the waves crashing into the rocks, and just at sunset. Did I mention I was able to cheaply upgrade us to first class for the 4.5 hour flight to Zihua from Minneapolis? Everything was tres bien until Saturday when I experienced, well, la la la.... 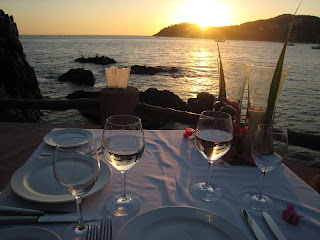 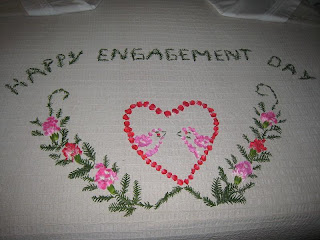 Every night the turn down staff left a flower / greenery display on our bed. The night of our dinner (celebrating our one year engagement), we got the largest and most elaborate one. 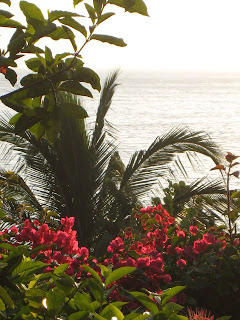 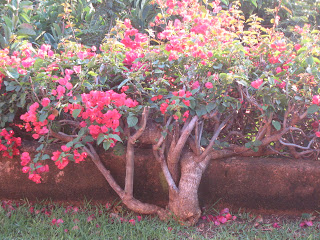 An interesting tree / shrub off our patio. 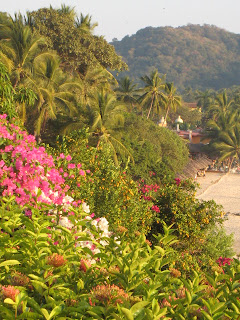 Expand this view by clicking on it. You can see white flowers, pink ones, and the mini orange tree (not a small tree, I mean small oranges). 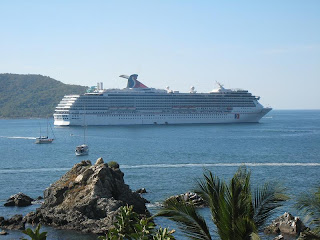 Two cruise ships anchored in the bay; this one was the bigger sucker, and stayed most of Saturday as people were ferried back and forth to shore to buy ceramic dolphins and crappy sunglasses that break after wearing them once (I bought two pair to find this out). The vendors in the "artisan's market" (read souvenirs) pushed you hard to buy anything. If you picked up something just to finger it, they'd sweep in, polish it with a cloth, and say you liked it. If you said no, they'd pick up one of a different color, polish it, and tell you that you liked that one. No, you'd insist. Then they picked up another one and shoved it in your hands and told you to buy it. After a while, you get used to this, though, and brush it off like the 5 rejection letters you recieved in the mail this week. Obviously, though, the vendors are relatively poor, and the town as a whole was run down and dirty, but I think that's expected in Mexico. The irony of the four star hotels and white American's with disposable income near the shore vs downtown is somewhat striking. That's all the social commentary you get from me, because that's not what the trip was about. (And as an American I have the inherent right to ignore other people and embrace them if and when I so choose, and in what manner best suits me at that moment--damn, did I just give more commentary? Stop it.) 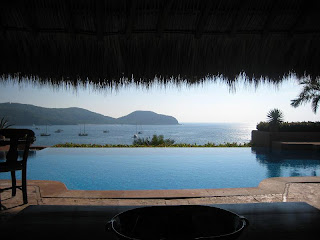 This is our villa's main pool, and where we had lunch and dinner several times. Most often, though, we had an elegant room service for all three meals, preferring to dress down and be lazy (there was a dinner dress code, but nothing we don't wear fairly often anyway. I preferred wearing just shorts, so, room service.). 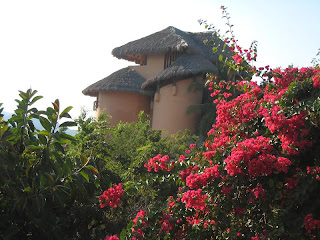 Another view of the villa next door, followed by us, and a pretty darn good sunset photo. 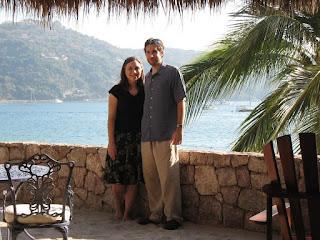 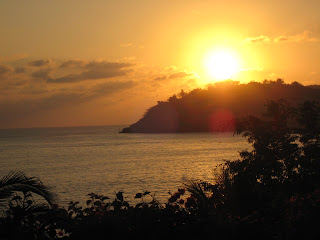 Posted by Benjamin Vogt at 5:04 PM

Ben: Thanks for taking us along on your trip! Your pictures are so lovely and as a couple, who is cuter than you two! Congratulations on your one year with a lifetime, a long one, to go!

Hola, I hope you had as much fun as all looked great.

I hate to shop in the markets near where the touristas are set loose.

Layanee--I'm SURE there are cuter couples than us, but thanks for the boost! Mexico was warm--mid 80s and sunny and no wind every day.
Lisa--We also try to stay away from tourist areas, but I forgot my sunglasses and we did have to buy a t-shirt, so it was unavoidable. After our first visit, we were better prepared to tackle the "market" and vendors seemed to leave us alone then.

We'll be in Zihuat in a couple of weeks... anything you left behind that we need to pick up? We're going to stay this time in Brisas del Mar on Playa Madera. I'd like to get out in the country more this trip (went on a daytrip to Playa Blanca last time and that was about it).
Don

Don--We walked right by there many times. Where else have you stayed? We really enjoyed CQC, especially the room, privacy, and views, but I think both wanted it to feel a little more exclusive, or posh, or something like that, especially since it was our delayed honeymoon. It felt more like a hotel than we had hoped, I think, and the food was pretty good, but not fantastic (still far better than 95% of hotels). Zihua seems to attract a lot of people! What keeps you coming back? And, we'd also hoped to go birding and hit the interior, but didn't, so I'm jealous of your inland plans.

Benjamin... the only other place we've stayed was Hotel Irma, which is certainly not fancy. We were able last year to do some birding by a big lake south of town (I've forgotten the name). We like the weather there; it's more dependably nice and sunny than further north on the west coast, like P.V., and the east coast. We might try someplace different next year though; maybe go to Costa Rica or something, where there's more to see. About day four in Zihuat you start thinking you've about done it (four days, four beaches I guess). Nice people, though.
Don

You're right, Don, if one doesn't get sick, four days gets to be a little long. But we did enjoy relaxing, and getting away from teaching / grad school. We'd thought about heading to the Caribbean, but didn't want to travel that far.