I'm not a tenured or non tenured professor--I'm a lowly grad student getting paid just enough to teach courses the department can't cover with full time faculty. I'm thankful for this opportunity and genuinely enjoy it.
In a campus-wide email today I found out some student in a classroom noticed another student had a gun, maybe a toy gun, sitting on their desk in class. That student texted another outside of class who contacted campus police, who then came to the classroom. The student with the toy gun was playing Assassin, a game much like tag but with fake weapons.
If I were in college I'd probably play the game--it seems kind of fun, especially among the sometimes monotonous nature of classes. However, it seems idiotic beyond imagination to not know what implications this game can have in the light of the growing number of campus shootings.
What becomes more real as I teach in higher education--almost 7 years now--is that each class, each year, raises the possibility of something happening. To me or to my students. It IS a super slim chance.
But what if a student disagrees with a grade I give them? What if they misconstrue a joke in class, by me or another student--or any type of comment for that matter--as some personal insult or attack? What will trip someone? What if they just don't like me? (Quite an uncommon problem--students not liking teachers... novel idea.) It doesn't seem to take much, but it's the straw that breaks the camel's back--these things have years or a lifetime of building, and apparently teacher / friends / administration are supposed to notice. But that isn't likely for many reasons, especially with teachers who have four classes and / or large lectures where anonymity just is a fact. Teachers are not and will never be guards, or therapists, or mind readers (though we can easily tell when someone plagiarizes, though folks keep trying anyway, year after year after...).
I'm lucky, perhaps, that I teach small English classes of 6-32 students (that's been my range over 7 years); this makes it very hard for any student to be just a face in the crowd, even if they never talk. I get to know them to some degree whether they like it or not. But still, it doesn't drastically change the dynamic--students are still students, people I barely know with their own complex thoughts and emotions and logic. Just like me. It's the nature of being human.
I'm not afraid when I teach. I don't think about this subject often at all. In a world filled with senseless violence of all kinds how can one act among many make someone become so static as not to live life, more fully even as a result?
I've had students get terribly upset, but always in my office or on paper. I've had students accuse me of some awful things I just didn't nor would ever do. I've had students misconstrue verbal and written comments. These are all inevitable things. I won't be more "careful" than I am now in these interactions (consciously or not), because to do so would create an environment of trepidation in the classroom, and this isn't what college is about.
I only hope, and tell my students, that if something is bugging you, if something's up, you can and should come talk to me and I'll be all ears (and many take me up on this offer, and I appreciate getting to know my students more). I don't mean this in a therapy session type of way, I mean this in a collegial way. Students and teachers are interactive partners in living and learning, they give a lot to each other--with that comes, at times I think, a sense of being more than a didactic teacher; and that's where it maybe gets dicey. Either way it can be a no win situation (99.9% of the time it's a win win)--being impersonal could lead to violence, being personal could also lead to violence. Is this even the issue? One of them? The issue is so complex I need to stop writing. So back to what I said earlier--I'll just keep teaching because it's what I enjoy doing. Except for days I'd rather be writing. Or gardening.
I can't leave on such a serious note. Maybe I should. Below is a pic I found on the internet: spring in the (upper) midwest--just one month away! 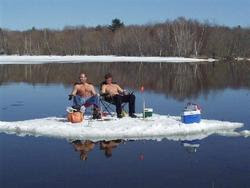 I use to teach so I understand your difficulty with knowing what is help and what is stepping on their toes. Young adults are complicated. I wish you the best for caring and wanting to help and understand. I blame a society who doesn't have a place of reufuge for some kids. The troubled ones are just aimlessly walking about with no direction. Anything can set them off. They just don't feel safe no matter what environment they come from. They could be upper income families or down in their luck--but either way--something is failing our kid's self esteem and they are taking it out on hurting others.

I like the two guys holding out for some good ice fishing luck.

Just keep on enjoying teaching and interacting with your students. Fear gradually eats away at us ...

It is a complex issue and one that is not easily solved.

Anna and Kate--Thanks for your comments. I wonder if Richard Louv's ideas play any role in self esteem issues? It's so complicated, being human, and yet so simple.