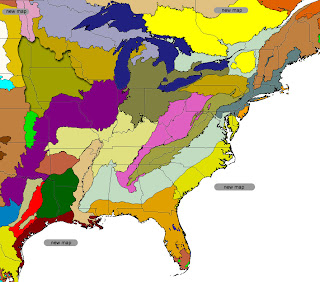 You gotta go check out Wild Flora's post on maps of North American Ecoregions. Here's what I "learned" about Lincoln, NE:

This ecoregion gets its name from the tall grasses that once grew all over this area. These species of grass can reach more than 7 feet (2 m) in height! About 265 herbaceous plant species make up most of the tallgrass prairie in Iowa; 237 species were recorded in a square mile near Lincoln, Nebraska, and 225 species were recorded in the Missouri Valley. Unlike the soils of the Flint Hills Tall Grasslands that borders this ecoregion, the soils of the Central Tall Grasslands were easily converted to use in farming. Historically, fire and drought and grazing by bison and other ungulates were principle sources of disturbance here, which were necessary to maintain the grassland characteristics of the region.
WOW! 273 herbaceous plant species in one square mile right here. I like that. (What was it 300 years ago?)
And, of course, this:
Distinctiveness (1=highest,4=lowest): 1 (globally outstanding) This prairie ecoregion had a rich herbaceous plant cover including as many as 250 species.
Conservation Status (1=most endangered, 5=most intact): 1 (critical) There are no sizeable blocks of intact habitat remaining. Nearly all of the ecoregion has been converted to tilled cropland. Most of the intact patches are smaller than 0.08 km2.*
You can link to a list of native wildlife--I wish there was also a link to native plant species beyond the woody. So far all I get in 4 years of living here is we have bluestem, indian grass, switchgrass, coneflower, liatris, et cetera. Yes. Fine. That's not 237 species, however.

Very interesting...I will add the link to my favorites. I like maps and learning.

The ODNR (Ohio Dept of Natural Resources) has some lists of common Ohio wildflowers and other typical Ohio plants on its website. Maybe Nebraska has something similar, somewhere?

I'll warn you, though, that "typical" for your state doesn't mean that it will grow where you are happily. The giant trillium happily grows wild in the woods behind my parents' house... but I'd have a heck of a time growing it here in my sandy shore soil.

Man... after following those links I found out that they aren't very flattering to my little ecoregion--not as far as "distinctiveness" goes, anyway. Boo. But they do mention the Great Black Swamp, my original homeland. :)

Tina--I'm glad I could be of service!
Kim--Yes, certainly, just because something is native to your state doesn't mean it'll work everywhere. Which is why I try to go with the simplest plants (at least until I get my green legs fully under me). From now on should folks just refer to you as black swamp thing?
Gloria--Wow! I love it when people do research for me! I do research all the time and get tired of it. Thank you, this is a helpful list / link.

I just happen to know that website.It is the same one mentioned once before. The information throughout is excellent.
I have visited many state arboretums and native plant botanic gardens.
My favorite has been Rancho Santa Ana in California.Best native plant program anywhere but awful website.
http://www.rsabg.org/
I have a collection of sites that do a good job with their states natives.