This is the first year I've become lost in the garden, and to some degree I mean physically lost. The smokebushes are 10' tall, the eupatoriums and ironweeds and sunflowers are thick masses, the grasses broad and unfurling their plumes of seed-like earrings / many small chrysalides. 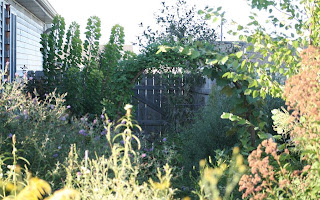 The side of our house gets a half day of light, morning sun. It is a dark, damp place come mid afternoon, with dogwood, ninebark, 'Fineline' buckthorn, spiraea, willow, and crabapple. It is both a simple place in its lack of flowers, and a subtle yet complicated place structurally. For this reason I feel the most secluded and calm here, as do the many tree fogs. Last night I watched as one climbed the gold-leaved smokebush near the top, stopped on a leaf, and seemed to gulp the air. The night before 5 of them were spread on the south wall around the back door, catching insects attracted to the interior light seeping through curtain edges.

A large female garden spider has made a web near the base of a clump river birch, tied fast to verbena and mountain mint. Sometimes I help her out. Fair warning. There are plenty of grasshoppers, and if I'm quick enough I can capture one in the curled palm of my hand. I'll rush over to the web, the grasshopper pinching and scraping at my skin, and toss it to the spider. She sometimes gets to them, but more often than not the grasshoppers work their way out and fall to the ground. But it's fascinating to see her spin a thick Saran Wrap-like film over her prey. Or, our prey. The grasshoppers feast in my garden.


When I got home from teaching yesterday, my wife and I released 7 monarchs (5 more today). One made a mad dash for the sky, the rest flitted and settled on the bald cypress, morning glories, or butterfly bushes. Nearby a preying mantis waited. The skippers and soldier beetles, numbering in the hundreds if not thousands, patrol every last bloom, often resting in my hair or on my shirt. Bumblebees wedge into shriveled up morning glories and thin-lipped turtlehead blooms. Recently, a hummingbird  has begun stopping by an hour or two before dusk to nectar at every last 'Nekan' blue sage bloom.

Ants are harvesting the aphids. Tent caterpillars have invaded the baptisia (it looks like Halloween). A highlighter-yellow goldfinch picks dried coneflower seeds from a blackened stalk.


Only 1,500 square feet and I think about how much I'm still missing, but know how much I've ceased to miss. Such a small place can become one that is infinite--the purest essence of wonder.
Posted by Benjamin Vogt at 6:16 PM

It looks great to have the plants intended fulling in the space even if it is too much. Here the Japanese bamboo grass is 2-3 ft tall in nearly every bed, whoa, getting sick of it.

I love that phase in a garden, when it's so lush and verdant...it almost feels like one giant organism! Funny, I used to do the same thing with grasshoppers...seemes a little macabre, but after you've watched them feast on your plants, it's pretty satisfying :-)

Glad you have a retreat to lose yourself in. I was a bit worried you'd show here up looking to take over my life :)

There's a disconcerting juxtaposition of peace and carnage in this post!

Beautiufully illustrated and written essay about the wonders in your paradise. Not sure about throwing the grasshoppers to the spiders though?

So you "toss" the grasshoppers into the spider web....sounds like someone's afraid of spiders? Or is this a "sporting chance" for the grasshopper? Reminds me of when my brother and I would toss crickets into our pond back home in Indiana--just to watch the bluegills swarm.

Randy--Oh, the plants aren't too much yet, especially on my troublesome "hill." Next year they better be troublesome though! :)
Scott--The grasshoppers haven't been nearly as bad as last year, but I still can't gow globe thistle and several other plants the insects love, and I garden ver much for insects, as Doug Tallamy says I should.
WA--Dude, just stop posting pics of your canoe trips! It's killing me!
Lucy--Life is yin and yang, the beauty of opposites. That tug and pull leads to balance and peace. Thus the carnage must continue, tooth and claw.
Carol--Now, paradise is a tricky word, isn't it? Paradise might be a few hundred acres. Won't you toss some grasshopper into a web?
Steve--More afraid of grasshoppers. They often jump onto my shirt or in my hair and that is 10 times more freaky than a spider crawling up my leg or a caterpillar in my hair or a wasp circling me. I'm going to install a bass pond in my garden btw.

I derive perverse pleasure from tossing slugs to the koi, who apparently eat them without bothering to chew or taste.

I'm so glad to be at the top of the food chain when I read this.

Aside, it's nice to create a little piece of paradise, you're on it. I get yer...