If you enjoyed the recent posts on my Oklahoma trip, you'll enjoy my piece that appears in the regional newspaper Prairie Fire. Won't you? Well, I think so.

"Native Plants + One Suburban Lot = Wildlife Preserve." The essay (or article) lists my favorite plants as well as places / resources to research and buy natives. The paper gave the below image a full color page! 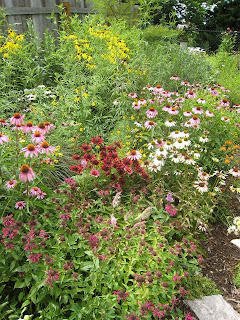 Here's the beginning: "This past summer I taught my wife the term “herbaceous perennial.” After I pronounced it a few times, defined it and used it in sentence as if at a spelling bee, she began to roll it around in her mouth as she walked our garden. “Her-BAY-shus,” she said over and over. “Perennials that die back to the ground each year,” I called after her from a distance as I weeded. “Is this a herbaceous perennial?” she asked, smirking as she touched the 8-foot stem of a joe pye weed in late August. “Yup,” I said, “and a native one at that.”

When I began the 2,000-square-foot garden four years ago, I was much more concerned about finding plants that wouldn’t suffocate in the clay soil in winter and spring, or whose roots wouldn’t be exposed by cracking cement-like soil in summer. In truth, I didn’t know much of anything. That meant non-native plants, common things the local nurseries sold—plants whose origins were likely to be in Asia, where most typical garden plants originate...."


So, it was 100 a few days ago and now it's 60. I need to divide some iris and widen the paths for the upcoming garden tour. A post, with pics, coming up of what will be going on here.
Posted by Benjamin Vogt at 11:03 AM

What a great article...you are not just a great gardener, but a very gifted writer. I can never put my finger on what it is about your writing...it's almost like you have gift for putting in words, the feelings and thoughts I've had myself, but can't quite verbalize.

Thanks for sharing that article!

Scott--You honor me. That's perhaps the best thing you could say to a writer. That's why I write, well, a big hope anyway. Many thanks.
IF--Hope you learned something, and enjoyed the trip!

Susan in the Pink Hat said...

Validation! Wow, that must feel nice.

Benjamin - it's always been a treat to read your blog. You've been a big influence in me changing my thought process about plant "wishlists" and garden planning. I'm eyeing that eupatorium - that is the coolest! Congratulations on another publication. (I absolutely love the "herbaceous perennial" comment in your article - it does just roll off your tongue!)

Shyrlene--Wow, thank you! So many folks in their gardens have small plants spaced far apart. Why? Get them in there like in the wild, and go big. The wildlife will thank you. Eupatorium. Ironweed. Sunflowers. Compass plant. Verbena. Aster 'eric's big blue.'

The landscaper at Org de Rac also told us not to plant 'specimens'. Let the plants help each other thru the summer by building a microclimate together.

Microclimate! Yes! I had a few folks visit my garden yesterday, and all were surprised by the density. But isn't that how they ae in the wild? All those roots talkign to each other, helping each other, all those leaves and no weeds under them. Hello!

You're on apartment therapy's re-nest 10 Garden Blogs You Really Should Check Out!!! http://www.re-nest.com/re-nest/outdoor/10-garden-blogs-you-really-should-check-out-149006

Anon--Ah, so that's why I have double the hits in 12 hours that I usually have the entire day. Lovely. Come on over people, be absorbed in all the Deep Middleness.

Your start sounds like mine....little knowledge and self taught working the dense clay of the NE...marvelous what you have learned and taught us...congrats

Donna--I research so much, a hangover from all that schooling, that I learned fast. I still have much to learn, thankfully.

Marvelous article! And the photos of your yard are lovely!