Earlier this week my wife took her cat to the vet. As soon as he arrives, they put him in a harness (straight jacket) so he can't claw their faces off. This would happen, and has happened.

The receptionist noticed my wife's name and asked if her's was the garden she saw pictures of in the paper a month or two ago. Well, yes, sort of. She asked my wife if I spent a lot of time in the garden, if it was a lot of work. If I was there, I would have fallen over laughing. Then told her to hire me.

No one believes me when I say I hardly do anything in my garden anymore--except swoon over it. Sure, I go out everyday and putz around, and I suppose if I wanted I could trim and tidy until I was blue in the face.

In March of this year I dragged out spring cleanup a whole week--cutting down hundreds of perennials by hand and using them as mulch. I also went to the city dump several times to get free compost, which I dusted over the garden and some of the lawn.

That's all I've done. I did just water the garden for the first time this year a few days ago--we haven't seen a good rain in a month. That watering was more for the new plants I put in this spring. The established plants all look good. And as an aside, I have a penchant for tall perennials and thick planting (plants will then support each other above and below the soil). I think this is serving me well. Hardly any sun makes it through to the soil, thus I have pretty much no weeds, and under the plants the soil is still moist an inch down, whereas in open areas it's the usual August dry.

So, don't be like this monarch butterfly and run yourself ragged: 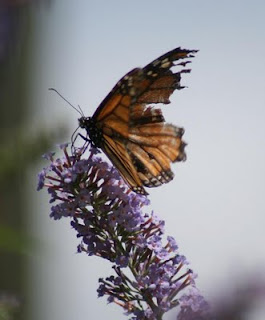 Plant tall, plant thick, plant the right thing for the right place, and then mulch. You'll look more like this tiger swallowtail: 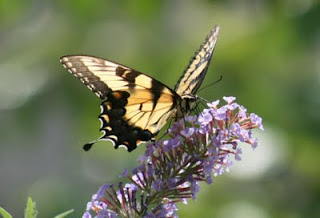 Benjamin,
I've had the same experience. Once we undid what the previous homeowner had done and planted natives, we seriously sit back and watch stuff grow. People look at you incredulously when you tell them that.

I mow the very small patch of lawn with a reel mower about every 3 weeks and that takes 5 minutes.

Speaking of mowing, I mow about once a month--mostly because I despise it. But right now the lawn is finally starting to burn up because of no rain and I don't water. However, it lasted a lot longer than my neighbor lawns who all mow once a week or more (though the guy next door can mow to his heart's content since his autho sprinkler comes on every other morning)

I completely agree. My front yard is the most intensely planted part of my yard, but after the initial few hours of spring cleanup there, I could literally cut my garden time down to 5 minutes/month. (And I do, during busy months.)

The most time-intensive part of my yard is my veggie garden area. (And most of that is my own fault, since I still haven't managed to get it mulched this year.) But everyone else sees so many plants in the front yard that they assume the front yard takes a lot of time!

Native plants is a great way to go! Not much effort to keep them happy:)

Kim--You talk to people? Like your neighbors? I wish I could. I'm so afraid I'll preach. I didn't during the garden tour though. When it's this hot out, 5 minutes a month of garden work is perfect!
R--Not much effort, eventually. As with any other plant, establishing is still an important part, right? I've found though, in my clay, I have no idea how much water is too much or not enough, so that's why I do so much plant research on proper siting... I prefer to not have to remember to take care of plants, and am likely wasting money as some out compete others, but that's what nature does anyway so why fight it.

I think Blackswamp Girl is absolutely right - the more plants you have, the less you have to do. You don't have to hoe, or weed, or stake, for a start.
Most of the things I do in my garden involve work I make for myself because I like changing things around. Otherwise it's pretty low maintenance - although people always laugh when I tell them that.

Victoria--why do people laugh? I really think when we say to them it's not much work, they think we are eccentric, that we love it so much of course we think it's not much work. But you, too, can save the environment and 10x less money and effort than all that mowing you do and spraying chemicals. Whoops. Miracle Gro just put a tap on my phone.
AB--I love that you got my book! It's so thin, and cheap, and has pictures in it! I mean, it's a breeze. And you can hit spiders with it (alas).

I'm starting a first year garden, so it feels like a bit more work at the moment. But next year, I look forward to just watching it more--like you. Enjoyed this post.

I agree--mostly. But I'd guess you don't have Japanese Stilt Grass (Microstegium vimineum) in Nebraska. If you did, you'd spend more time weeding.

Thomas--The first two years in my garden I spent 6-9 hours outside in one stretch, and it never felt like that--at leat until the sunburns set in.
James--Maybe we do have that, but not in my tiny spread. A lot of lawn out here anymore.