Where Have All The Normal Summers Gone, Paula Cole??

Every year the garden is different--though maybe you don't think so. Obviously, everyone's gardens are ahead of schedule; shoot, a few weeks ago I had asters blooming, and some eupatorium is just starting to flower a good two months early. Swamp milkweed bloomed in early June and never got pollinated. How do insects cope with this new cycle? I have seen fewer insects this summer--maybe I'm used to my garden blooming later (on time) when there are more insects, or maybe it's just a bad insect year. Or both. I suspect everything is out of sync.

Here's how I got myself in trouble this year, seeing my garden so distorted and unusual (with current. gratuitous garden images tossed in):

1) I pinched back a lot of things this spring, often too late. Every year I try to pinch earlier in spring, but get gun shy. I was earlier this year than last, but still so late that things are top heavy now and flopping all over the place. Next year I'll pinch in early April.

2) I wonder if the pinching is making things bloom earlier, or if in conjunction with the early warmth, they're blooming early anyway. Maybe the two, pinching and warmth, are a perfect storm. I wonder why plants are shorter and not as thick this year (dry spring?). I wonder if I'll have ANYTHING blooming in September and October, especially since I garden with fall at the front of my mind.

3) I need to divide perennials or just let them die off. I'm inclined to the latter, since much is self sowing now and the garden is making itself into what it wants. Still, I'm a gardener, and I want everything in its place
where I planted it. A conflict of interest for a "leave nature alone" kind of guy. 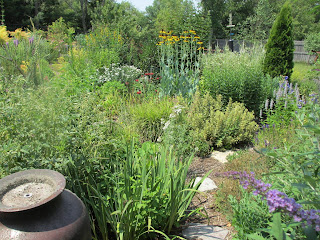 4) I have a 'Tiger Eyes' sumac that never leafed out fully this year (see pic #1). It just sits there in perpetual May 1 mode, looking bonsai. 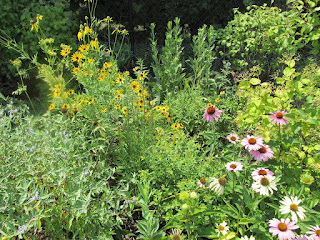 5) It's muggier and hotter than normal, much earlier than normal. I know that in a usual August certain plants will always show significant stress, but with it so soupy and hot now, will certain trees and shrubs just cash in early? This summer will be far far far too long for some plants.

6) I've watered the trees and garden twice now. I usually water once in August. I designed the garden to use very minimal water but it's not minimal enough for some of the larger, woody plants. 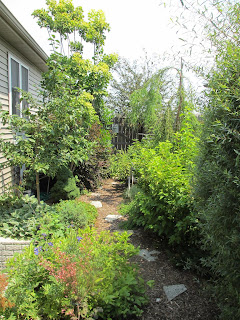 Posted by Benjamin Vogt at 6:05 AM

I'm wondering/worrying about all the same things, especially the synchronization of flowering and insects. I think cutting back to delay flowering on some fall species might be helpful b/c at this point nothing will be flowering in Sept or maybe the May flowering species will rebloom.......

Great topic of a warmer year de-syncing wildlife from plant life cycles. Maybe, maybe not. I just heard a meteorologist from Indiana note that the last summer and growing season like this one was in 1980...and I recall reading about 1936 and another time around then, as a very hot time for the midwest. I was in HS in 1980 in Denver, and it was toasty! 1950's in NM and TX.

Pretty messed up here, too...but except this year, the other way...native plants in wild freezing, hummers coming in a month before delayed blooms are starting.

I'll put on my OU Met 1004 hat and start looking into some of that info.

Messed up would be good wording. I think the soil temperatures warmed up too early, which I speculate effects everything.

Yeah, all my autumn plants are going already.

I did the same thing, waiting too long to cut back, because all the books said "June!" and so I waited and waited and then sometime in May I started cutting anyway, but by then half the plants had fallen over. I do not think the books were written with this year in mind.

Same here...lots blooming a month at least ahead with little rain and more heat then we usually see. Not sure what the garden will bring in fall but I am also wondering many of the same things. I do want to divide some things one of these years and spread the wealth. I am definitely worried about August unless we cool down a bit and get some water. I don't generally water the garden or established trees. I may be losing one tree due to the strain. it is about 5 yrs old. Only the few containers and veggies get watered now.

Heather--Aw, rebloom, I wonder if that'd happen? I'm cutting back fall plants semi-hard now, pinching like crazy. I may keep pinching until August 1 this year.
Mr. D--Man yer old. :) I didn't realize the hummers had it bad down there this year. Maybe it was the same here for different reasons since the timing of everything is whacko.
Greg--Soil temp, never thought of that. I'm pretty sure some of my garden soil never froze last year, the part in the sun. I'm almost certain, in fact.
Ursula--Let's write a new book. I mean, it won't be a money maker quite yet, but in a decade, BAM! "How To Guess In the Garden of Climate Change."
Donna--water those younger trees and shrubs! I need to, again. All of mine are 5 years or younger and looking BAD. In fact, I'm going out now!

Yes, this crazy weather pattern is really wreaking havoc with things...and the ripples will continue.

I was going to suggest a double-cutback, with the last one happening now... but from what you said to Heather, it seems like you're already doing that?

What's odd to me is that EVERYTHING here is not early. Are the late things late because of the dry summer? Has that more than counterbalanced the early spring? (I should have been eating blackberries for weeks, now, and am still waiting on my first peach... even some ornamentals, like my 'Hameln' pennisetum, are late this year to bloom!)