Farming Away Our Future

I'm enraged. I'm just so angry. I want to blow up tractors and burn cornfields. When I read articles like this, showing images of the last vestiges of northern prairie being converted to corn and soybeans, I just can't take it. Millions of acres in just a few years?* My god. My god.

Why is prairie important? Water filtration. Prevents erosion. A nursery for native insects which do the core of pollinating 70% of our food and are the base of the wildlife food chain. Grasslands also used to be incredible carbon sinks hedging against climate change, and cleaning the air like the Amazon rain forest; you've read my rant about that I hope. Lot's of graphs and stats there.


Yes, let's plow up marginal prairie land that's highly erodible, that may or may not get enough rain year to year, because we have crop subsidies -- the farmer will make money no matter what. And let's be clear the farmer is not the Super Bowl ad's romantic version, it's big ag companies. It's lobbyists in government. The farmer is dead and died half a century ago.

Yes, let's plow it up. We need more corn, 80% of which goes to feedlots to fatten up animals as soon as possible, and those fat animals increase our risk for heart disease because they're so fatty. This is not the bread basket of the world (if it was we wouldn't be growing monocultures), it's the bread basket of corporate greed and genocide on a scale I thought we'd left behind: give us our beef, our diabetes-inducing high fructose corn syrup snuck in to almost every product. What a killing Cargill makes.

Yes, genocide. We did it once with the Plains Native Americans, and in the process were pretty thorough with countless species of flora and fauna. But we didn't finish the job. There's still land left in the northern Plains. The prairie pothole region where some 90% of North America's waterfowl breed. But why do we need ducks? We need ducks because they need prairie. Bible-thumping conservative rural folks, scripture says what you do the least of these you do to Me. Me = God. If you take away homes, cause extinction of species, you are eradicating any hope of heaven. You are eroding divinity.

If we don't value the land that sustains us, we don't value each other and ourselves. We might as well start jumping off buildings and shooting each other -- end the misery our children and grandchildren will endure because of us, this culture. We are better than this. We love our children, don't we? We value our lives, don't we? Must our rage and ego condemn all life to just hanging on? Must our own insecurities be forcibly echoed on the landscape around us until all creation suffers the human condition of doubt, longing, and fear? If you can't love the least of this planet, there's little hope you can genuinely love anything at all. 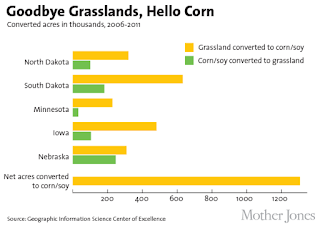 *Mother Jones came out with a piece that has lots of fun facts:

-- If farmers set aside some land for pasture we'd have healthier and tastier beef, and that grassland would mitigate farming greenhouse gas emissions by 36% since it'd be a carbon sink.

-- Prairie loss from 2006-2011 was on a pace similar to that of the AMAZON RAINFOREST. So where's a "save the prairie" campaign with sad tv commercials? Prairie is our rainforest!

-- This level of rapid conversion has not been seen since the 1920s and 1930s. We all know what happened as a result. If we plow up erodible land, fill in ponds, and take down trees, we're undoing everything the government made farmers do to prevent a dust bowl repeat! Lordy we are stupid.

-- Prices for corn and soybeans doubled between 2006-2011, thanks to ethanol mandates (you know it takes as much energy / resources to produce the equivalent amount of ethanol) and crop insurance.

-- This month the USDA issued a report, "Climate Change and Agriculture in the US" which states that it won't be until mid century when climate change starts to inflict serious yield declines. (But if we plow up more prairie, won't we be releasing more stored carbon and creating more temperature increases? We have to leave prairie alone NOW and pray to God, that's what the report really should say.)
Posted by Benjamin Vogt at 8:12 PM

Again, the ability to love others (at least those like the person in question!) and not have a similar, highly-elevated land ethic, is so sad but so common. I think most are this ignorant, but perhaps it is minimizing getting affected by those who are willingly ignorant and concentrating on / rejoicing in the teachable? I hear you - I'm an LA who actually cares about ecology and plants, including natives.

I could plug in desert, modify a few terms or ideas to fit, and say the same thing.

Great stuff, esp. since I figured out you with many others dropped of my blog roll in my recent adjustments.

It is and unfortunate situation. The best we can do is protect our own prairies and assist with those protected by the states or other organizations.

But really, I'm all for you lighting up the corn fields. I swear I won't tell a soul.

David--you're a rare breed, I think, LA-wise, but there are more and more of you. thanks for your commiserating. :)
Nicholas--That's not the best we can do, it's the least. The best we can do is what we aren't even dreaming of doing.

I was not happy with that ad as it made everyone think of the small farmer when it is all about promoting the big ag farms which are not creating anything edible for me...I concur with your outrage.

Everything about this makes me feel ill. I seriously don't understand how NO ONE seems to care. I'm glad you brought up the rain forests. I'm all for saving them, as well, but what's up with people caring more about something down in Brazil than they do with the land right outside their doorsteps. Short-sighted and foolish...and yes, we're on our way to another dustbowl.