Oklahoma (and Kansas) One More Time -- The Memoir is Nigh

At the end of May my wife and I made another tour of Oklahoma -- the last before I, hopefully, finish a draft of my memoir this summer. I wanted to see more of the natural landscape, because Oklahoma has the most ecoregions of any state (as well as being one of the most biodiverse, thanks to going from high plains in the panhandle to mountains, woods, and steamy marshes in the east). We literally kept hours ahead of the storms as they moved east, missing the El Reno tornado by less than a day: turns out that tornado set the record for the widest one ever recorded at 2.6 miles, missing the 2.5 mile one in Hallam a few years back, which is just south of us here in Lincoln.

So, shall we take a tour? 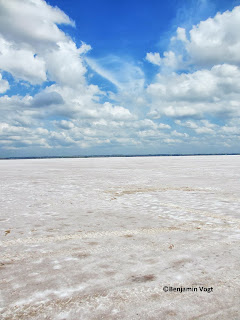 First stop were the Salt Flats near Cherokee in north central Oklahoma. Felt like I was standing in a warm Antarctica. Or Utah. I don't know -- decidedly not Oklahoma, which also has a large sand dune formation southwest of the flats. You can dig for crystal formations, and on this day many folks were out there. 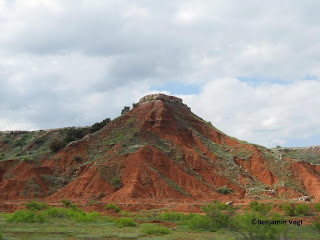 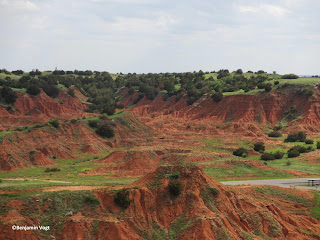 Above are the Glass Mountains, more butte than mountain. The official written name is Gloss, a misspelling. Supposedly, in the right sunlight the formations sparkle like glass due to a high selenite crystal content. 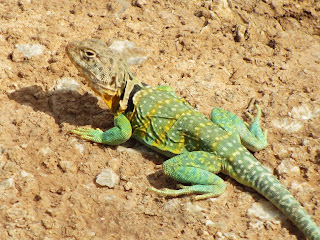 In the Glass Mountains we also discovered the state lizard, the eastern ring collared. Above is the male, and below the female. 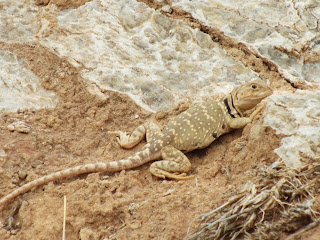 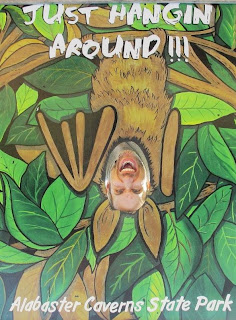 Northeast of Woodward, in northwest Oklahoma, are the Alabaster Caverns. Bat caves, but without bats on this trip. Except for one outside. Pretty sure he had rabies. 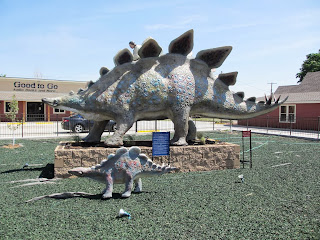 Also in Woodward this new dinosaur installation off the main drag.... 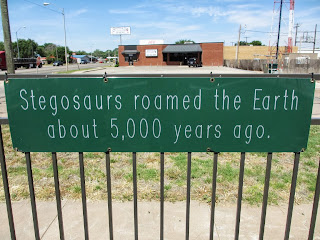 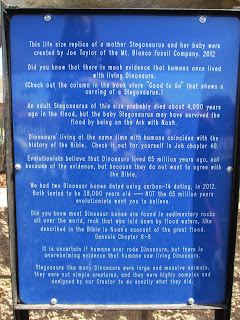 ... and says this. Did you see the kid in the fist image riding the dinosaur like a horse? You can agree or not, but I personally find the logic a bit suspect -- of course, the grammatical errors don't help (they should've hired a proofreader).

We then headed south to where I spent the first ten years of my life, Weatherford. 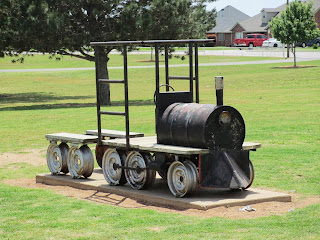 I used to play on this choochoo. So, that's all you get for Weatherford. Let's visit the 1894 homestead in Corn, 30 minutes southwest. 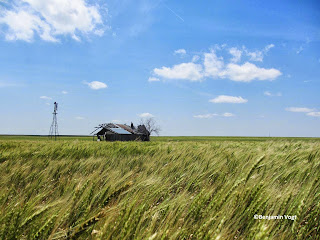 The above is perhaps my favorite picture I've ever taken of the field. The late wheat crop helps. 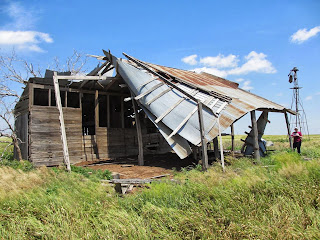 I've visited the place my German-speaking, Russian born, Mennonite great great grandparents settled once each of the last four years. Each year the 2nd barn (1st taken by tornado in the 1940s) looks worse and worse. Here, the south side is about to come down. 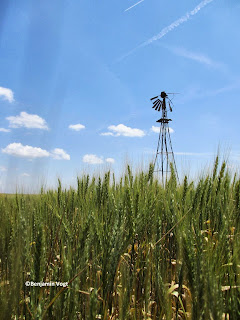 My great great grandparents actually met in Kansas, where she settled in 1874 and he in 1879. He filed for the first bit of land they could own outright on May 24, 1894 (two years after the Cheyenne reservation was opened), and in August they took the two week trip southwest from central Kansas to western Oklahoma. 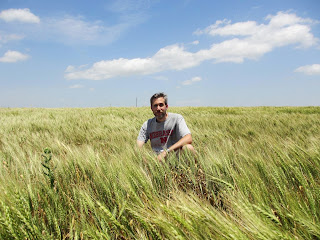 If you know the cover image on my poetry collection, you know why I had this picture taken. The cover features my grandfather, father, and two uncles in their wheat field about 10 minutes east of this site. 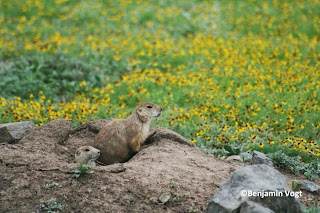 Mom above would not stop yelping until we walked far enough away, but the prairie dog far above let me get within about 10 feet.

A woman flagged us down and told us to take a side road where bison were right at the edge. Sure enough, a male was feeding within about 30 feet! Closest I'd ever been. 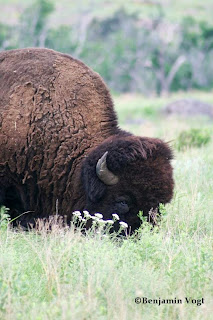 And yet more bison: 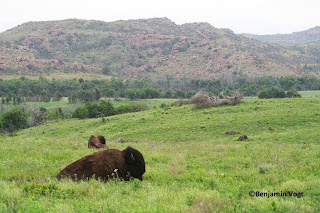 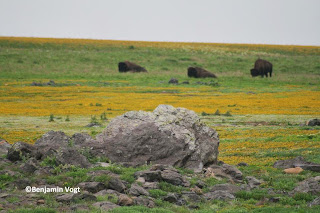 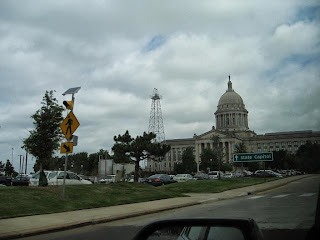 The Oklahoma state capitol is the only one in the U.S. with a working pumpjack. In fact, the entire city sits atop a major oil field.

At the end of our week I was to present at the Association for the Study of Literature and Environment conference in Lawrence, KS, but my panelists all dropped out for various reasons (Linda Hogan was the first, and I was so excited to meet her!). So instead we visited the Tallgrass Prairie National Preserve, where rumor had it bison were being born that minute, but we tuckered out long before we made it to their pasture. 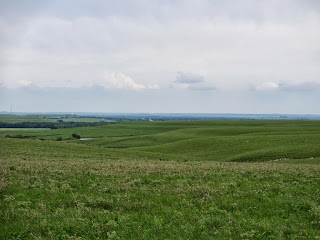 I have two months to finish a book I've been researching for almost 4 years, that so far has 60,000 words (two months because that's when the money runs out). I've read about the Mennonite church, the reformation, the inquisition, Mennonite migrations east through Poland and into Ukraine. I've read about Southern Cheyenne culture, the crossroads of Mennonite missions on the reservations in Oklahoma in the 1800s. I've read about Custer, railroads, barbed wire, cattle trails, and treaties. I've read about prairie ecosystems, endangered wildlife, the geologic history of the Plains. I've read every word my grandmother wrote, in diaries from her early 30s to backs of photographs. I've interviewed family, researched in museums and archives and libraries, taken thousands of photos and videos. I've slowly come to hate Oklahoma less, to see something good in myself that's defined by the state, a latent gene, an echo, a memory passed down not just by family but air, grass, and animal -- lives I've never meant but lives I want to save or resurrect.

I feel like I'm ready for every contingency, every avenue that may pop up while writing, perhaps too ready, and yet I know the good writing happens with surprise and terror, joy and faith, regret and hope all in the sweaty and exhausting moment of composition. The research will open subconscious ideas I would have never found without having done the hard prep work. I do not know if this book will be any good, I don't know how to write it so it has larger appeal -- but I know I won't let these ideas guide my process, that I'm a writer, an artist, and I will write what I feel I must and that this is better than living my life any other way. The story of Oklahoma is the story of our nation, of our species, of all species put into overdrive and pushed to the moral brink. Oklahoma is a question mark at the end of a sentence we aren't yet willing to answer.

What a wonderful tour of OK - I'm posting the link in my gardening FB page for other Oklahomans to enjoy.
Looking forward to the book!

Nice to see my college home state get the western portion of it so nicely portrayed...Conde Nast would never get this. Unless it were near Brooklyn, Austin, Santa Fe, or the west coast, and then it would be gospel. Salt flats, farms, prairie, and wind included. Great Wichita Mountains scenes, too.

Seeing you in a Husker U tee shirt, I had to laugh since you seemed not into the Husker Nation thing, and I would guess the Sooner Nation version!

Oh, I'm not a Husker fan at all, rather go Sooner if I had too, but I did get my PhD here. I did put in 6 years of my life in school. I do have a home here. You know. Everyone laughs at my Gophers shirts so I had to cut back on my #1 team. :)

I have traveled through OK a couple of times crossing the country and have stopped often along the way. What impressed me was the diversity from one end of the state to the next. Looking forward to your book.