Is better than the crappy Lincoln one that's in a freaking mall parking lot for heaven's sake. Still not as cool as the Columbus, OH one in June, and the Excelsior, MN one also in June--both of which I haven't been to in years.

We went Friday, only hours before a storm with 90 mph straight line winds uprooted trees city wide, cut power to over 100,000 folks, and made the art festival look like, well, a warzone. Artist's tents were everywhere, the main and massive music stage tent was blown into a downtown office building with poles sliced through windows. Only 12 artists had to bow out after the first day, but before that we had heard 50% lost most everything. Sad.

We saw three wonderful booths, especially. Raku potter Casey Hankin had some large, cool (and underpriced in our opinion) pieces, as well as some funky ones with faces we'd love to have in our guest bathroom. Casey is from Colorado. 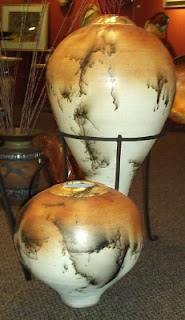 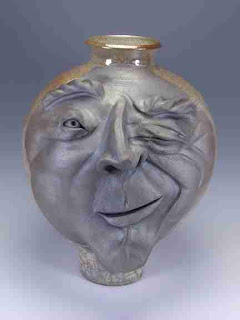 Then there was Wendall King, of Peony Farm Studio in NW Iowa, who makes occasional tables out of stone and iron. Very cool, very expensive. 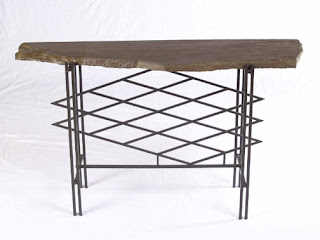 Can't find any images of a painter who had many pieces we loved, named Lonnie M. Carter out of Des Moines. IMHO her work was over priced, but I'm not painter, just a humble writer who may someday be lucky to get used copies to sell for $1.50.

I enjoyed, for 5 seconds, the one artist who made model airplanes throughout aviation history by using aluminum cans--bud, coors, coke, et cetera. Certainly takes skill, ya know.

Luckily, we made it back home before the Omaha storm, and before my car's engine light came on and it starting convulsing violently while idling. Guess what I'm doing Monday?
Posted by Benjamin Vogt at 11:48 AM

LOVE the raku!!! And sorry about your car. (Been there, done that too many times in the ancient Golf. Thank God for AAA and a cell phone to reach them!) Glad you beta the storm, though, but how horrid for the poor craftsmen. I hope they were insured.

You have had your share of bad weather out there haven't you. Glad you made it home and love, love, love those pots. I want a winking vase!

very cool pottery Benjamin. Glad you made it home safely. So sorry about the car. I hope it's not anything too serious. . .

So sorry about the weather. It is hard to plan ahead for soemthing like that. You just have to take your chances with the weather sometimes.

Wonderful pots. I live on the Coast where the Mad Potter of Biloxi made his pots...George Ohr! Those pots remind me of his work. If you are not familiar with him, google and have a look. You will love it. I have dug clay from the same place for my pots. I feel a slight mad connection to him. I do't like the ordinary either. : )

Ellen--Never thought of that, being insured; do poor artsists do that, I wonder? Hope so, especially for summer shows in the midwest.
Layanee--I'll go in on a vase with you; you can have it half of the year, I'll take the other half.
GG--Nice to hear from you again! Maybe we can go three-sies on the pot with Laynee.
Eve--George Ohr made some WIERD stuff, but cool. Anything unusual and unexpected (artistically) is most welcome in this house.