Gardening is a contact sport. I'd show you my arms, but even I can't stand to look at those candy cane twirls of scratches and painful cuts.

Over the last month I've spent a few hours here and there taking my time cutting down herbaceous perennials--plants that, in 2010, had begun to reach their full potential. As someone who likes tall plants, I was quickly overwhelmed this spring. Plus, I was sad to see a beautiful winter garden end.

I don't know how clean of a practice this is, but for the first time I broke up, by hand, as much as I could of what I cut down and reused it as mulch. This made things last much longer, but also saved me the expense of a mulcher / chipper or paying the refuse company to pick up my plant bits (I don't have a suitable compost area because I'm worried about resale value in a year or two).

So, below are before and after shots. You'll notice that the after are greener--I took too long. Even the butterfly bushes, some 7' tall last year, were already putting out growth all the way up their branches. I cut them down to 12" each year, and assumed I still had some time. Assuming makes an ass out of you and me (and perennials). I---am---tired. 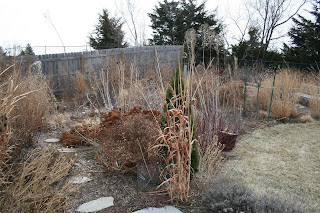 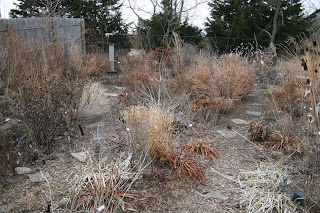 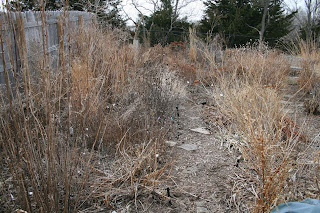 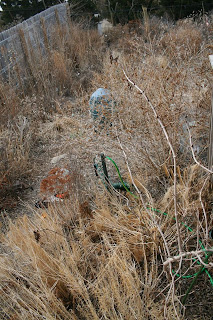 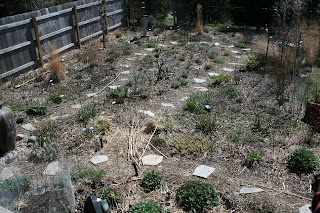 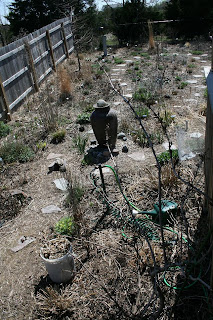 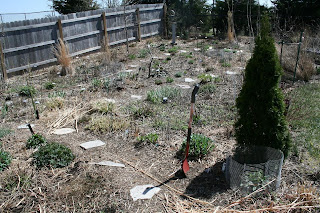 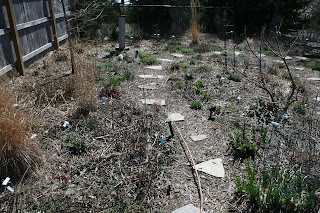 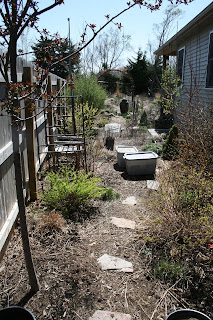 I still have to do the summer grasses, then on to bigger issues in anticipation of the garden tour in late June--replanting stone steppers, patching holes in lawn, deciding whether or not to give up on that weeping bald cypress which grew to 10' in one year, then has slowly died back to 4' over two years. I should just kill it and replace it, shouldn't I? But I love it. But it's just taking up space where I wanted a small tree, not a de-evolving shrub....
Posted by Benjamin Vogt at 4:32 AM

Email ThisBlogThis!Share to TwitterShare to FacebookShare to Pinterest
Labels: 2011 cut down, garden

Selling in a year? those nice neighbours are getting to you?

I would miss this garden, it has magical inviting quality (when it has greened up again)

I don't see us staying here much longer. No good job. Good job is likely elsewhere, as it tends to be in academia.

I did my clean up in stages, too. Things are shaping up your way. Let us know if you liked the mulch you created with your dried plants.

I had new growth on the stems of the clematis I cut back. I forgot to do one of them, though, and haven't decided if I'm going to go ahead and trim it, as it looks kind of OK.

I applaud your breaking up the old stems and stalks to use as mulch. A good use of organic material, the birds often use the smaller pieces, and I've never noticed any increase in plant disease from the practice.

I feel sure you'll land a good job. I hope you and spouse can land jobs in the same town--I know too many commuting academic couples.

Sue--The clematis I cut back accidently I broke up and stuck into the dirt--a few are leafing out! New plants?
Adrian--It's a tough job market out there! You have to have insane credentials, it sure seems. As for the garden, I've noticed birds stopping by to pick up small twigs and pieces of grass, so that made me happy!

I have several seasonal cut downs throughout the year. All of them are cathartic to me, scratches be damned.

Several cut down? Really, Les? Geeze, that sounds like work. We don't go for that around here in the Plains.