Do You Have Any Butterflies?

I remember last spring, which feels like last week, when a million red admirals and sulphurs descended on my blooming ninebarks. Then the two weeks of spring we had ended abruptly when it was 90-105 every day for a good two months, with 0.7" of rain since mid June. I haven't spent much time in the garden this summer because I'm a fairly heat-sensitive guy. But I've seen very very very few butterflies this year and perhaps 50% of the normal amount of insects. Right now certain species of joe pye weed are blooming and are always covered in soldier beetles--but this year I've seen perhaps a dozen or two.

We usually raise anywhere from 100 to 200 monarch butterflies from May to September. This year I found a few eggs in June, raised and released. Then three weeks ago I found 16. 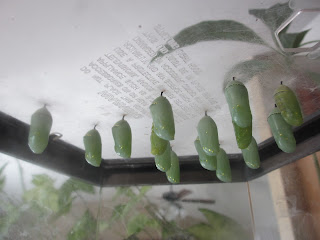 That's it. For the whole summer. Apparently butterflies overshot this year into Canada, but you can't deny the effect of drought, coupled with the ongoing threat from spreading agriculture into Conservation Reserve Program lands now expiring (the price of corn is just too tempting not to plant on hillsides, drained marshes, marginal land), and willy nilly chemical applications by farmers and suburbanites.

I believe that no issue our government faces is more critical than that of how we influence our planet. You can't argue healthcare, welfare, and equality if you're starving, have no electricity, no clean water, and the economy tanks because we rely on oil. I believe the one issue no one risks their political fortunes on is the one issue that can solve, in large part, all of the above issues and more. I'm naive, perhaps. But when it rains this fall and we forget about the drought, when we forget about the BP oil spill (we already have even as Issac washed up sunken tarballs on to shore), the climate will still be changing at warp speed in geologic time.

I am terrified when I hear that governments are already clamoring for drilling rights in the arctic as sea ice hits record lows, because I hear no concern at all for the methane bubble in the cold water that will be released once the pressure of ice is gone, nothing about CO2 sequestered in frozen permafrost set to wreak havoc on global temperatures, nothing about the end of arctic animal species, nothing about being farsighted or caring not just for the planet but each other. If I have a child I'm terrified for them. What we do to the planet we do to ourselves one hundred fold. If we're so self centered why don't we care for our own species? A recent poll showed that the majority of Americans believe human pollution is significantly hurting the planet, but a much smaller number believe in climate change.

In 10 days I'll release my only large batch of monarchs of the year into an uncertain future that most will not survive--and then climate change will, in the next few decades, destroy their winter grounds in Mexico even as we prevent logging now. There's always maybe. There's always the human ability for immense compassion, faith, and hope manifested in inspiring action in unexpected moments. There's always that I suppose.
Posted by Benjamin Vogt at 8:57 AM

our messy farm, here in south central PA, has been host to hundreds of butterflies this year. We allow the milkweed to grow all over the place, and are tickled when we see it eaten up by the Monarch caterpillars. And then we see them flying all over after they hatch...beautiful!

We hope there are still plenty of people who allow their property to be messy from here to Mexico and Canada, providing spots for those long commuting creatures to rest.

due to drought we had a few eggs here on all the milkweed...very sad

I have 17 (so far) Black Swallowtails in my terrarium, courtesy of two females that stopped by last week and found my parsley. That's the most I've ever had, and the latest in the summer I've ever had them, for that I'm quite pleased. I haven't seen many Monarchs at all, but I did almost sideswipe another car the other day trying to avoid hitting one that was flying across the road.

We have many milkweed plants growing on our property (most of which we let go wild), and I raised & released monarchs for the first time this year. Such an amazing process! We had drought here in SW Michigan, but thankfully it ended at the end of July when we finally started getting rain. Didn't notice a decrease in butterflies really, but I did notice a lack of lightning bugs... Our neighbors took a trip to Alaska this summer that included a boat tour and a trip up to the Arctic Circle. They were amazed at the amount of broken-off ice chunks and glacier cracks. When it comes to global warming, it's sad how many continue to deny it or make excuses. It seems pretty simple to me – if the ice that makes our planet a temperate place to live melts, we're screwed. And we won't be able to get it back once it's gone.

Plenty of milkweed in my gardens... no eggs, although I did see two monarchs dancin' in the blooms this Summer. A Tigertail visited everyday for a couple of weeks. Usually we have dozens of Cabbage Whites... haven't seen any this year.

I certainly share your concerns. It feels like we've jumped at least one step on a "punctuated equilibrium" scale. Politicians are "fiddling while Rome burns." Citizens, in general, are even less concerned than politicians, if that's possible.

On the home front, my gardens look like I haven't touched them in several months...mainly because I haven't. I, too, am not good in high heat. The front, sunny prairie flower bed is looking ragged but is surviving without too much issue. The back shade garden is just about gone. Literally. Much of the shade was created by a thick hedge of Amur maples planted by the prior owners. I was just out looking at them...and I think they are almost all dead. Rather than just lamenting in a comment on your well written post, I probably ought to write a post of my own.

Here's hoping that fall brings some rain to all of us!

I've heard the drought has really effected the numbers. Thankfully we're actually recovering from a drought now here in NC, so I've been seeing a lot of butterflies. My milkweed is covered with caterpillars, and my gutters are being used as a perch for chrysalises.

I think that for a lot of people, climate change and environmental concerns don't seem real to them. It doesn't affect them, so they don't really care. So many people barely even go outside anymore. Our society is out of touch with the world and blind to what is around us - we are consumed with our technology and virtual reality.

My milkweed died without many new plants emerging. I usually have bunches of Monarchs but haven't seen the usual amount this year here in NOLA. I got a little neighbor girl interested (she's about 10) and she asked me the other day if I'd had many as she had not either. Of course, they spray for mosquitoes here - not just trucks but crop dusters too. I realize West Nile can be dangerous to some, but I don't think the spraying is effective; in fact, I think it kills so many other insects that mosquito predators are killed too. I'll see what effect the hurricane had soon (other than forcing me to thoroughly clean my yard). I'm glad I can see the Monarchs here on your site.

SD--You know me, I intend to buy some land and have it be so messy you'd think I belonged to a natural junkyard association.
D--Very sad indeed. I thought just maybe I'd find some yet this week, but I knew that was a pipe dream. Everyone is in migration mode.
JS--You'd risk a car accident or a butterfly? You good soul. I have maybe 20 bst cats in July, none since then. I was surprised to get that many given this year.
CB--Oh, don't tell me about the broken ice. I'm just soul crushed. All that dark water now absorbing more sunlight, melting more ice, releasing more CO2 from water and permafrost.... oy.
C--yeah, no cabbage whites. I maybe saw one at most. Odd indeed.
GG--haven't you guys had a lot of rain the last few days? Seems like verytime I get my hopes up the rain's in KS.
I--That is so cool! I'm always paranoid and bring the eggs and small cats inside so they don't get infected with tachinid fly larvae. It's a shame when we have the "it doesn't effect me" attitude, but I suppose it's human nature. We'll get solar power when we're out of food and at each others' throats I guess. It'll be fun!
Anon--Good for you! Yes! Get those kids while they're young, you never know what seed you plant. All that spraying is a travesty, and I agree, it's likely also killing beneficial bugs like dragonflies, and maybe influencing birds and bats, too.

My wife and I have brought monarch caterpillars in to raise them for the last several years and it seems each year there are fewer of them. Last year it was hot and dry in SW Ohio (like it is in Nebraska this year) and we had virtually no monarchs. This year, even though we had much better rainfall and cooler temperatures, we still had no monarchs even though our gardens are full of milkweed. Then, a couple of weeks ago they showed up and have been nectaring and laying eggs every day. We have brought in between 50 and 60 caterpillars since they showed up ... although many of them had grown quite large by the time we realized they were here and many were already infected with the parasite. Not sure if this is the beginning of the migration south or if they just finally found us.

Through most of the summer we have had an abundance of other butterflies (especially swallowtails) but no monarchs until the very end of August.

I enjoy your blog and appreciate reading your thoughts/concerns about what is happening to our environment and the seeming lack of concern on the part of those with the power and platform to do anything about it. My wife and I do what we can to educate folks in our area but you have created a platform that (hopefully) will catch the attention of many more. Let's hope they listen and learn to care.

Mark -- thank you, I really needed a note of encouragement after my post on 9/10. We erase ecosystems without ever understanding them, and someday we'll wonder why we're out of food, clean water, living soil. Manifest destiny.

This year I raised 5 monarchs. Last year 25. The years before 150 and 200. These are eggs gathered from my 1,500' garden. It is terrible what's happening, to monarchs and countless other species, and there's no urgency at all -- even as I call planting with natives a moral act, and as we SEE species extinction, I'm called crazy. It's frustrating how much we hurt the world and embrace that hurt, then expect to love one another and live happily. Sigh.