Below are just a few images depicting the Pacific Ocean garbage patch, roughly twice the size of Texas, where plastic and other debris is floating stagnately, sandwiched between currents.

From the photographer, Chris Jordan:


"The nesting babies are fed bellies-full of plastic by their parents, who soar out over the vast polluted ocean and collect what looks to them like food to bring back to their young. On this diet of human trash, every year tens of thousands of albatross chicks die on Midway from starvation, toxicity, and choking." 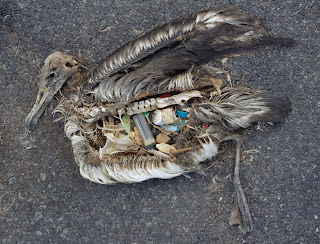 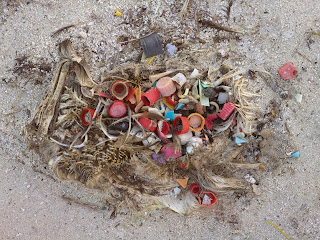 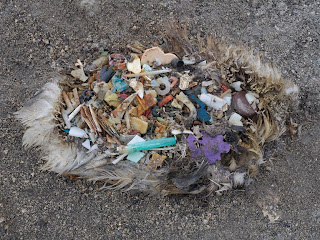 How many recognizable objects can you pick out? More photos at Ecotone.

And that's just what we see on one small spit of land, much like how little we will see in the Gulf, and how little we see in our own backyards.
Posted by Benjamin Vogt at 7:35 PM

Even though the pictures break my heart, I predict that if every American were to stop using the ocean as a garbage dump, less concerned people in other parts of the world would continue to do so.

These photos make me sick--and I mean that as an actual physical reaction, not just a statement of my strong feelings.

And just because we can't keep everyone else from doing it, doesn't mean that gives us license to excuse ourselves from making the personal effort.

I agree with Kim, progress begins with that one personal step we ourselves make. We can't bring those birds back to life, but we can work to bring awareness, which is exactly what you have done here, Benjamin.
Frances

Just reading a novel, two men smoking, then flipping the butts in the lake, where three ducks are swimming. From where do people get the idea that a river, lake, the sea, is somewhere for garbage dumping?

AB--That may be true, but the U.S. is a huge nation, using up most of the energy and producing a good deal of the trash. Where we lead, I think others will follow--at least until they get too much of a taste for the good life, and 3rd world nations become 1st world, addicting to the drug.
Kim--I was surprised that these photos werent' staged, but the photographer said they weren't. It looks like some kid came along and made a pile of junk she found!
Frances--Thank you kindly. One island, this is only one little island.
EE--Well, river do carry away debris.... Out of sight, out of mind. I'm sure that's how god looks at sin, too, which is what I consider this to be.

Benjamin - I think god looks at us - I gave you the Garden of Eden, and we will be required to account for and remember each of our crimes against his creation of nature. Each discarded plastic bag, and bottle cap. It may be out of our sight, but it is not out of his mind.

Litter in the ocean, on the side of the road, in our lakes and streams is one of many indications of how our culture is focused on "me" and not "us" - certainly not on creation as belonging to God and on the need to be good stewards of it. I believe that the same people who think nothing of throwing their trash out the window of the car or into the water would complain loudly if I threw my trash into their yards or their pools!