Back to the garden. Ain't it pretty? No more oil ranting for a while. We had 3.5" of rain overnight a few days ago, and not only are the plants going crazy, so are the biting birds which get stuck in my pant legs and puncture me dozens of times. And don't you hate it when you come inside, and an hour later you feel your hair moving, and you reach up and find a caterpillar? Happens to me all the time. Terrifying. 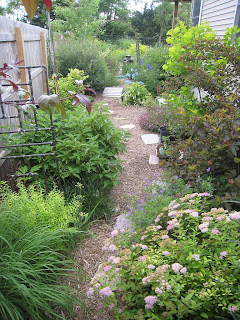 At the entrance with some spiraea, big bluestem, dogwood, ninebark, and smokebush. 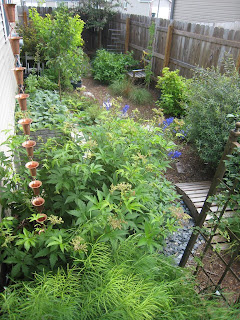 Looking back toward entrance with queen of the prairie in the foreground, and along the fence a cut back weeping bald cypress that died 75% after breaking bud, but I think I saved it (cut back to live wood, and now it has new limbs coming out. Whatever, you know?). 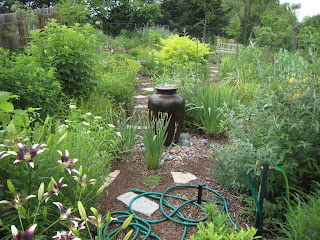 View from under the arbor. That little hose post extender dealy on the right is awesome. I don't have to weave hose out from the house and behind shrubs thus breaking said shrubs (still have to get back there and turn on the water though). 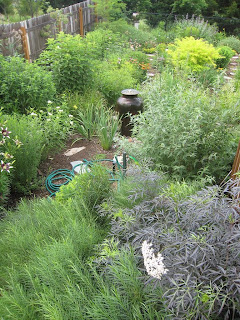 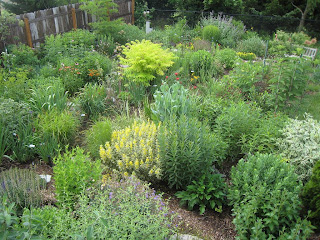 Lots of stuff just a week or two from bloom. Already the garden is flushing with white, yellow, orange, purple, red, blue... and green. I almost find all the flowers a bit gaudy, but the insects seem to like them. The foliage and plant shapes are more calming and interesting to me. 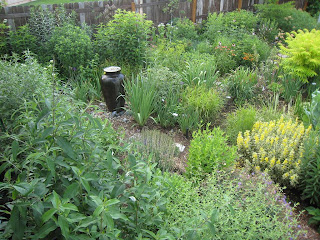 I should not have planted so much iris. It spreads fast. I'd rather have other things. Copper iris does seem to spread slower (and siberian, sorta), so maybe more of those, and less louisiana. Anyone want some iris divisions later this summer? 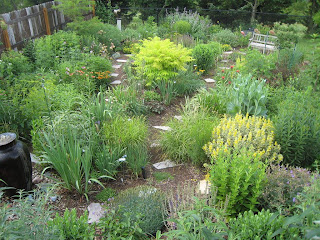 Lush and beautiful! And I noticed the rain chain - I'm envious.

It is pretty! I'm amazed at the change from your Spring pics, must be rain-happy plants. And big caterpillars. Please keep those in your garden.

Very pretty. I like foliage as well. Have you thought of adding any red leafed plants? It might add an interesting punch of strong color.

Ginny--The rain chain is neat, but only in a light to moderate rainfall. Heavy rain and the water goes everywhere but down the rain chain.
Lynne--Rain and compost happy plants! Now if only more monarchs would stop by. And a hummer would be nice for once.
ThreeDogs--I do have some red / dark foliage in there but hard to see--some geranium, ninebarks of course, 'husker red' penstemon, carex, chokecherry out front. I've tried to place them strategically so as to echo off the fountain, but the green foliage is more vigorous and drowns them out.

Lovely. Ive found that many red flowers, plus a feeder put up beginning in July will attract hummers. but perhaps you do this already? I gotten hummers in fall, but not in spring. I keep hoping.

Isn't is amazing how much herbaceous perennials grow in three years? Looking good. Our Filipendula is at about the same stage.

Adrian--I have seen two hummers here in 3 years, and one was at the yellow honeysuckle, the other some pink agastache. I have tons of agastache, some coral bells, and many kinds of monarda. Argh.
James--I've tried to add soem shrubs here and there for winter interest, but it's hopeless--the perennials just blow them out of the water. Every spring I'm amazed at the moonscape, and every sumer dumbfounded at the forest that comes. It's fanatastic!

Beautiful ! You have the knack which I lack :) of spacing your plants so they (at least yet) don't seem to run each other down. Mine are all intermingled and runaway tall ! For Monarchs I suggest more milkweeds. Though from your blog I read the "Monarch Waystation" designation which suggests that you must have milkweeds somewhere. I have Asclepias tuberosa, which clumps sedately, but stunningly orange to red-orange. A. speciosa, Showy Milkweed, mimics Common Milkweed, but is a little brighter, with a faint scent. But it will take over if you let it, running over 10 feet. And A. purpurascens, Purple Milkweed, is a bright reddish purple, scented cinnamon-like, really pretty. And it minds its manners well also, like Butterfly Weed.
One last comment about water supplies...I saw one of your hoses kinked, like vinyl hose loves to do. So frustrating when you get to the end of the hose and you have to walk back twisting the hose to undo a kink ! So I spent $20-$25 (can't remember which) for 50 feet of rubber hose at the Home Despot, and never have to unkink it. Love that ! Just a thought for the next time you buy hoses.
Thanks for your great blog, pictures and observations, and commentary.

Scott--Oh ye of little faith. Have you not seen my plant list under the garden tab above? My wife would say, "Oh, yeah, he's got just a few milkweed."

And right now I have 4 monarch cats inside, 5th instar. I usually get more in August.

Ouch ! I'm embarassed ! Guess I better nose around the blog a little more b4 I make my goofy comments... What a list...you know about milkweed, for sure.

Curious, why do you bring the wee Monarchs inside? Maybe to protect them from predators? And because they're fun to watch...

ps, I have an as yet unidentified milkweed I grew from seed
collected just over our border into Wisconsin...don't remember much about the plants, but the seed pods were as thin as pencils. Does that sound familiar to any of your plants? Maybe you can narrow down my possible options for I.D.

pps, appreciate how you answer each comment on your blog...nice interaction. I'm terrible about posting and responding !

Scott--I bring most of the monarchs in because of tachnid fly and wasp parasitic predation (it's gross when it happens). Over 90% of monarchs in the wild never make it to butterflies, and with vanishing milkweed habitat in the U.S. and the 50%-80% death rate at the overwintering site in Mexico this winter, we need as many monarchs as possible (though there may never again be as many as there were just a few years ago). I also bring in a few black swallowtails, but more to watch them because they are endangered. Never did it as a kid, so making up for it now.

As for your milkweed seed pod, you've got me stumped! It sounds like an amsonia hubrichtii pod, but I'm sure you know the difference. Asclepias verticillata looks similar to A. hubrichtii.

I try to comment to everyone that stops by, because I sure appreciate it when they do. Sometimes I get busy and can't, and hope folks don't find it rude. I often go to blogs and the writers NEVER respond, which bugs me. Why communicate at all then?

What are the lillys in the third photo, beautiful.

Have you ever thought about growing milkweed?

Rob--Stalk away! I enjoy the chase. But, what is too funny is that Scott (commenting just above you on this same post) asked if I had milkweed. I'll refer you to my responses to him--re my extensive milkweed list (full plant list is on the "Gardening" tab of my blog). I raise monarch butterflies which are in trouble right now, and just yesterday was lamenting with the Nebraska Statewide Arboretum director about how everyone thinks milkweed is an invasive weed and should be avoided at all costs. Then we preached to each other about how many millions of insects milkweed draws in, how well-behaved 95% of the species are, and how A. tuberosa is ugly orange flowering junk that never attracts monarchs.

Anyway, that asiatic lily is 'Netty's Pride,' one of my indulgences since I profess to be a native plant gardener. I also grow the black cultivar 'Landini.' You can find a close up of Netty here, in my second most recent blog post: http://2.bp.blogspot.com/_zR4V_4FDUps/TCASJD6DD9I/AAAAAAAACeE/2ZEzjNwcYkM/s1600/Netty%27s+Pride+Lily.jpg

Scott and Rob--Add Asclepias speciosa to my milkweed list, bought three plugs yesterday for my dry hill (though this year not dry, as we've had 7 inches of rain in the alst two weeks).

That was my idea of a joke about milkweed.

I read the comments and your comprehensive reply and well, couldn't resist.

Sorry, sometimes my humour can be complete bollox.

Rob--Touche. I should have got that. People always tell me my humor is very "British," dry and I can keep a straight face so people do a double take and think I'm 100% serious. Sarcasm is rare gift.

Nettys Pride eh, very beautiful she is too 'ol Netty.

Funny all the milkweed huzzah ! btw, my A. tuberosa had a Monarch caterpillar chomping away on its ugly (not!) orange flowers as if it were enjoying itself. I think it's beautiful ! And I saw numerous other Monarch caterpillars for a day or so, and not of tiny size either, on other milkweeds. Then they went away. Maybe the wasps got them, I don't know ! Yes, as with all the natives, I wish we could drown out the din of the nursery trade against the milkweeds.
A. speciosa is very nice, but it will run well, though it's not hard to pull up the runners.

I just perused your blog - congrats on the 3 years anniversary of the garden. That's how old mine is, too. Thanks for leaving a comment on my blog.