Memoir -- With Insects, Flowers, and Eggs

In the soil is life. In the soil there is who we will be and who we have been. In the soil there is joy and happiness, quite literally. Researchers at the University of Bristol have discovered a beneficial bacteria, Mycobacterium vaccae, that may increase levels of serotonin in the body. Serotonin is linked to easing depression, and in lab tests with mice the researchers discovered that neurons in their brains were activated by the soil bacteria and produced serotonin. If touching the dirt can be so beneficial, why scold our kids when they do so? Why wear gloves in the garden? 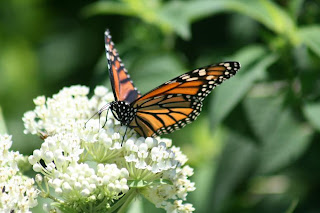 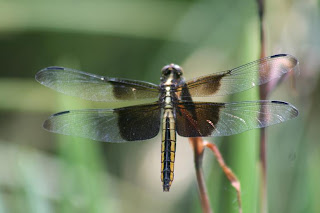 Beautiful dragonfly when clicked on and enlarged

Through our hands we repair the disconnect of ourselves and a larger creation. When you look at the stars it is only natural to begin tracing figures, to connect the dots with your finger—to make an image that coheres logically and inscribes our interpretation and our imagination in a place. Gardening is a lot like this. But to imagine that the world we live in has an elegant coherence on multiple levels, that one can trace the past and future, seems like a hubristic idea. But it isn’t. Everything has its logical place, extended from the smallest perception to the largest. 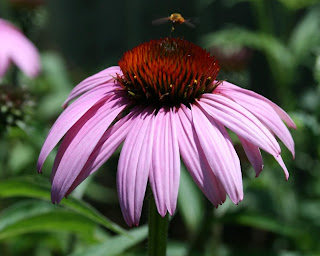 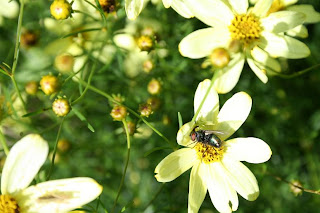 I heard a voracious buzzing, turned, and saw this coreopsis bloom going crazy--turns out a yellow spider (see it?) just caught a fly
Nature is not massively chaotic, is not disorganized, though we might like to think it is some wilderness that tests our very existence. Since 1975, when Benoît Mandelbrot coined the term “fractal,” mathematicians and scientists, and now ecologists, have begun to understand how the world is a uniform place. A fractal is “a rough or fragmented geometric shape that can be split into parts, each of which is (at least approximately) a reduced-size copy of the whole.” What is a fractal? Snowflakes. Paisley shirts. Coastlines. Mountains. Clouds. Trees. Ferns. Broccoli. Coneflowers. 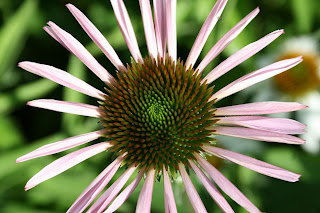 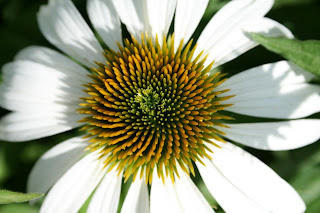 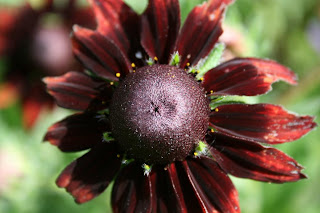 Scientists and mathematicians can use the principles of a fractal to project the future development of an organism. By taking the smallest organized component of a forest and studying its architecture—for example, a tree—we can predict the growth of the larger forest and figure its carbon sequestration and oxygen output. Heartbeats can be mapped as fractals, and therein lays the potential to identify impending heart attacks, while predicting blood vessel formations that sometimes lead to cancer cells may help to stop that disease from even occurring. Larger animals and plants use energy more efficiently than smaller ones, and that’s because in their genetic code the formation of cells, nerves, and veins is a fractal sequence. 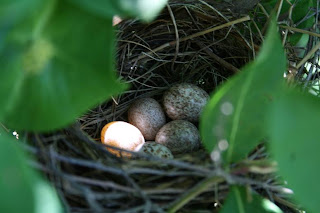 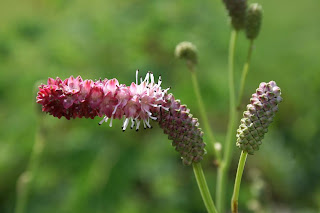 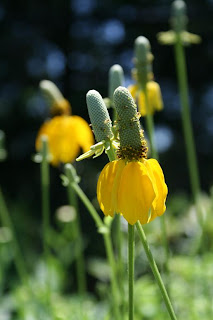 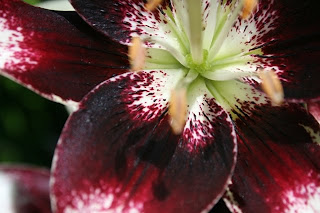 'Netty's Pride' asiatic lily (and my entry into Gardening Gone Wild's photo contest). Click on the pic above to see how the petals almost look like a painting's canvas, raised texture and all. Who needs real paint?
Posted by Benjamin Vogt at 8:45 PM

Extraordinary posting on fractals.
How is a paisley shirt like a fractal?

If touching the dirt can be so beneficial, why scold our kids when they do so? Why wear gloves in the garden?

Because sometimes the "dirt" is tapeworm-riddled opossum feces, that's why.

Beautiful photos, thoughtful post. I've never thought of nature as chaotic - human lives, yes - nature, no. The more we are in tune with God's creation, the less chaotic our lives feel.

Allan--Paisley design is a fractal design. I used to wear them in the early 90s religiously.
Mr. S--You aren't a romantic, are you? I rarely wear gloves, if I do it just doesn't seem real, being in the garden. It's my equivalnt of walking aroudn barefoot or with pants off.
Ginny--Christianity sure looks at nature as chaotic, a dark and evil place, wild, ready to test your morality and connection to God's will (or the rich white patriarchy's). Of course, at the root, Christianity is very reverent toward nature, and I discuss some of that in my book.

I'm visiting via GGW and I'm so glad I discovered your blog. Your writing is elegant and eloquent, your photos rich and lovely. The patterns and deep color of the lily is stunning, but I must confess the brown thrasher eggs had me at hello.

Steve--I'd say come over and satisfy quench your lust since I'm all alone this week, but that'd make my other half jealous.
TO--Glad you found me, then! Beware, I sometimes rant like a madman, especially when teaching has me on the ropes.

I love how the spirals radiate out in two directions in the heart of a coneflower. Nature's Ode to Joy.
And yes, Christianity is rooted from the Creation in Genesis in our role as stewards of the earth. Society finds it more comfortable to ignore that, easier to forget that.

Great Post.........
It's a nice collection. I like the fist one image in which beautiful butterfly sitting on white flowers.
Thanks..........

It's a fantastic collection. I like the image in which butterfly sitting on white flowers.
Gifts to Pakistan