Is It Ugly, Fall, or My Paranoia?

When I walk in the garden it seems fuller still, likely because I'm in love with tall plants. Yet this view from the deck is much worse than I know it can be, mainly because the sumac--which lost its leaves weeks ago, likely due to the 75 dewpoint we had for 3 weeks in August--isn't turning its usual (breathtaking) bright red and orange: 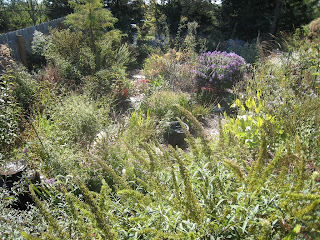 Below are other shots which more approximate how I feel in the garden, vs. how it may really be (gardens may be uglier than they appear). The grasses around the bench are finally screening how I want them to, but being tall prairie grasses on their own, they flop. But I see good winter cover for birds, so it's a wash. I used to have miscanthus there but they quickly gave out--the indian grass and switchgrass do much better. And by the obelisk... next year that will be filled in with a large aster (the spot has tormented me for years!). More asters. Stay tuned for an impending post on my many aster species. Waiting for one more to bloom. 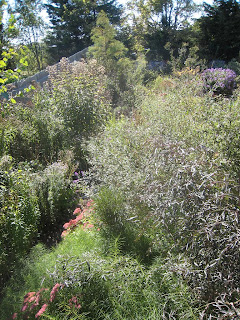 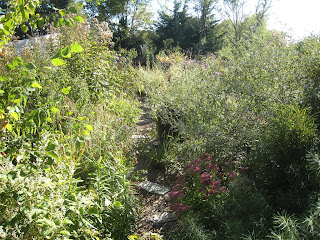 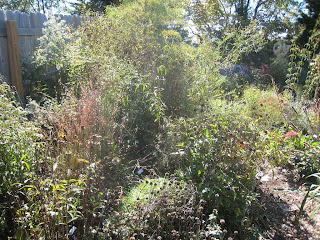 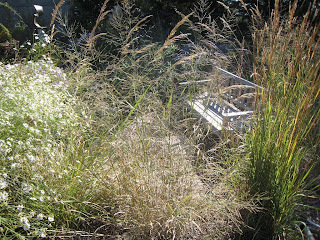 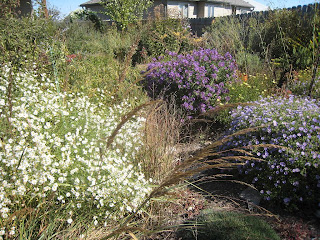 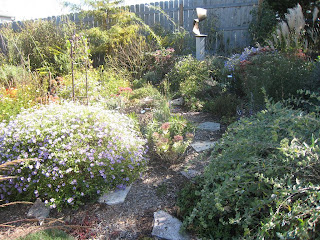 Doesn't look ugly to me.

I look forward to the Aster post.I've just planted 'Little Carlow', my first one which I hope can take it dry.

It's GORGEOUS. And alive - I loved your bee video. I know sumach fall foliage is spectacular - mine is just turning - but one of the pleasures of winter, I think, is to be able to appreciate the shapes of branches as well. Think of it as a sculpture, not a skeleton.

Rob--I seem to, so far in year 1 with them, only had luck with small woodland or groundcover asters in my dry spots.
Victoria--Last year that sumac was so vivid, and I was excited for this year because it was three times as big. Then the leaves got spotted, and they started dropping from the ground up (as did a willwo tree which turns lovely yellow, or would have). I garden for winter sculpture, of course, but it's not winter--I need my fall color, I need my seasons!

Not knowing what I am missing - it looks the sort of garden a delighted small child would run into and explore for hours ;>)

Gardens may be uglier than they appear, but I usually have my gardener's glasses on and can overlook quite a bit. Your photos show a prairie garden in its autumn splendor, which is a mighty fine thing.

Your garden looks like our utility easement with more diversity. It would make the resident gardeners jealous. And it is fall. Things are tall, blowsy, floppy and extravagant. I'm coming to the notion that well groomed paths are the key to balance in the wild cultivated garden.

I agree with the above posters that it looks lovely...but we do tend to be more critical of our own gardens, don't we. I'd be upset about the Sumac too, I'm hoping mine perks up for fall, it has struggled this year in the garden (not sure why). I'm hoping it was just settling in (being it's first full season in the garden) and will be robust next year. There's nothing quite as disappointing as having something you waited all year for just fizzle and not happen :-( Otherwise, I really think the garden looks amazing, full, vibrant and wonderfully chaotic!

It looks enchanting, Benjamin, just how a fall prairie should look, to trained gardener eyes anyway. Might I suggest the aster Jindai? It stands straight and tall, no flopping whatsoever, and spreads nicely.
Frances

I don't think you're giving your garden the credit it's due. I see many colors and lots of interest. Of course, I'm a lover of ornamental grasses, as well as the cover they provide (as you pointed out). I think your main disappointment is the lack of brilliant red/orange color from the sumac, which IS a shame. But your garden is definitely not ugly!

It was such an intensely HOT and DRY summer...I think the autumn colors may be stunted in a lot of areas. The colors here are barely noticeable. I think your garden is doing what most gardens are doing this time of year. Sometimes the beauty is there but you are looking too hard for your pre-conceived notion of what you 'want' it to be. I say just enjoy it for what it is...a lovely, autumn garden.

EE--Or a garden some small child would destroy.
MMD--Gardener's glasses? Are those like beer goggles? :) Thansk for wearing them.
CNC--I've let my paths become overgorwn this year, in the hope that the plants woudl store more energy and settle in more for next year's garden tour. I've tripped, gotten stung, spilled stuff as I wobble around things. Utility easement? Bah.
Scott--Wonderfully chaotic, yes, a good thing. I'm sure your sumac will really take off next year. My Tiger Eyes put on 2-3' this year in its second year. Or 3rd. I forget.
Frances--Jindai is about to bloom here! It's taller brother is spreading well and in full bloom right now. First year jindai will bloom for me, as it wasn't ready last year!
Kimberly--I'm really bummed about the sumac. But I do have lots of chokeberry, viburnum, grasses, crabapples, itea that get some very wonderful color too. You know, we want everything right every year, all in sync, and does that ever happen? It gets close....
Jan--I do enjoy it, immensely. It's been a wet year here, save august, with 8" over. Spring was wet, but now it's dry again. The plants have struggled a little with lots of early growth doped up on rain, then so much foliage I think they over perspired.

It's beautiful Benjamin - looks like autumn on the prairie.

Benjamin - I am SO stoked after reading both this post and your 'tall plants' post! Since there is some synergy in our respective zones & prairie topography, I now have hope for "tall plants" in my newly created "South-by-Southwest" garden!

Sorry about the Sumac - I was thisclose to purchasing a few of them this year, until the nursery worker told me they drop all leaves at once - when the cold hits! It bummed me out. (But, THANKS again for the fabulous ideas!)

GG--Oh hey now, it's not anywhere near that good!
Shyrlene--Glad to stoke you! Tall plants can work, yes yes yes. I do think it was the humidity since I'm seeing fungal spots on the sumac, willow, and sunflowers.