This is the first of two posts, maybe three, on an 8 day trip my wife and I just took to Oklahoma. My next memoir will be based on the state--where I was born and spent 10 years of my life, where my great great grandparents homesteaded, where so much of what America is can be seen in a supercharged microcosm of greed, ignorance, violence, hope, faith, and denial. Somehow, I have to navigate the collision of Native Americans, immigration, homesteading, farming, prairie, oil, and religion--and my own feelings about a place full of darkness for me. Hence my second trip in two years to face this emotional thing. I never knew Oklahoma, certainly never wanted to, but now I've turned to face that thing which has been stalking me all my life--indeed, my family since 1874. I had to finally begin to SEE Oklahoma, at least physically.


So to begin, we'll go chronologically. My wife and I started in Bartlesville, in the northeast corner (the trip map is above, our path highlighted in green). Along with Tulsa, Bartlesville is an oil mecca of Oklahoma, where towns of tens of thousands sprung up literally overnight. Of course, the same can be said for towns that resulted in land runs. Northeast Oklahoma is hilly and full of trees, and by the time you make it west, the soil has become red, there are few trees, and lots of cactus and yucca.

Our purpose in this city was to talk with one of my grandma's sisters about her childhood, and also to see the Tallgrass Prairie Preserve, managed by the Nature Conservancy. The 30,000 + acres were never plowed, just grazed, and the Conservancy has been working for around 20 years to restore the flora and fauna. Part of that restoration includes a herd of 600 bison.


While we were a bit early to see wildflowers--and certainly early to see the tallgrass of late summer--it was nevertheless inspiring to see this remnant prairie, one which tangentially extends far north into eastern Kansas in the Flint Hills. As an aside, the backroads of southeast Kansas were far more beautiful then I'd imagined. 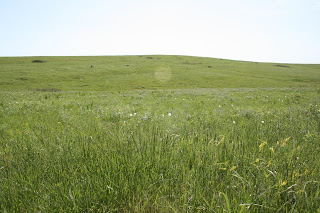 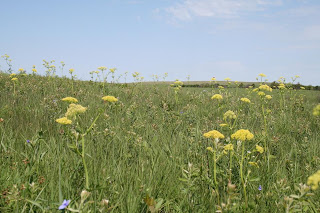 Bartlesville also has the last surviving steam engine from the AT&SF line, 1 of 332. The 940 was built in 1903 in Philadelphia, and was in service for 51 years. It is 80 feet long and weighs 150 tons loaded with water and coal / wood. It's top speed was 35mph. Restored just a few years ago, it's a marvel to me, and an iconic image of westward expansion, the dicing up of Native American lands--something both monstrous and beautiful in its design. 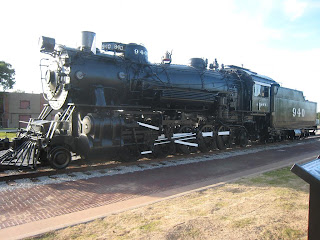 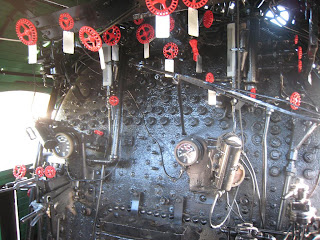 Also a marvel, were the many painted bison in town--clearly a community arts project. My wife pointed out this bull to me with disco ball "maleness."


Bartlesville is home to the only "skyscraper" designed by Frank Lloyd Wright, the 19 story Price Tower, built in 1956 for an oil pipeline mogul. The building is clad with copper. 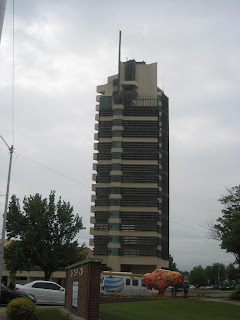 After Bartlesville we drove 90 minutes to Oklahoma City, where I wanted to visit both the OK Historical Society and the Oklahoma City National Memorial.

The memorial was, if this doesn't sound crass, the most beautiful, subtly moving, and elegantly designed memorial I've ever seen. It was evocative in its minimalism, creating silence and peace and reflection in ways even more powerful than the Vietnam Memorial in D.C. The Murrah Federal Building was bombed on April 19, 1995. Each chair is inscribed with one name of the 168 men, women, and children who died. Every row represents the floors where each victim either worked or was visiting. The south end of the grounds still has some of the original foundation walls, where rusting rebar protrudes from the poured concrete. 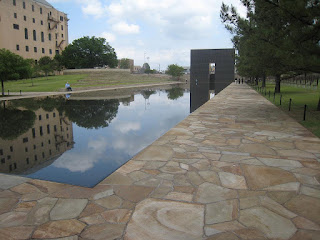 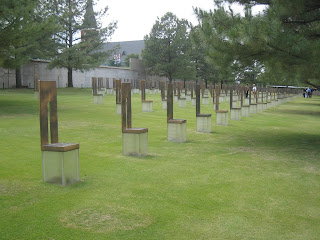 "We come here to remember those who were killed, those who survived and those changed forever. May all who leave here know the impact of violence. May this memorial offer comfort, strength, peace, hope, and serenity."
﻿ 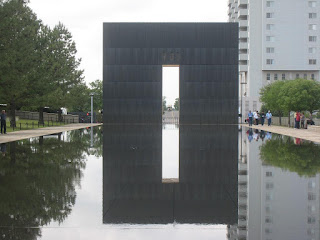 We then visited the Oklahoma Historical Society, along with at least 100 junior high kids (loud, and constantly texting as they viewed exhibits). It's a nice building overlooking the state capitol--the capitol is the only one in the nation that has a working pumpjack on its grounds pulling up black gold.

We also talked with an older gentleman, a volunteer docent, who was once a professor whose field I can't remember. But his son is working on trying to make ethanol from switchgrass (die corn, die!), and I couldn't help feeling that here in Oklahoma, at the heart of collective history, across the street from big oil, another world was beginning to violently collide with an old one, just like it did during the land runs only a little more than 100 years ago. But that's a story for the next post, one of nature, the Cheyenne, and Custer; it's a more personal story, too.
Posted by Benjamin Vogt at 12:44 PM

I visited the Tall Grass Prairie a few years back, it was 103 degrees and windy. Saw Regal Fritillaries. Thanks for the tour!!

Randy--Ah, you've been there? We were too early to be too impressed with it, snobs that we are.
EE--Yes, once were migratory big time. Alas.

Many treasures on the great plains and prairies! (covering my bases, in case they are not the same thing and overlap, somewhat) A friend in Tulsa took me to Tallgrass Prairie Preserve...impressive, but never posted on it. Will have to visit the memorial. Bison - masjestic...the cows are more manly than most human males will ever be!

Thx for the tour.

DD--I was born there, but never realized how diverse the state was, amazing. Did you see my other Oklahoma posts? Here's the last one, which also links to the 2nd about the Wichita Mtns--http://deepmiddle.blogspot.com/2011/06/oklahoma-part-3-corn-custer-cheyenne.html