The Sadness of Scissors

Iris reticulata began blooming yesterday, weeks early. The crocus began on 2/2, weeks early. In the garden is a sense that winter never came--the leaves are still fluffy and crisp between stalks of aster and coneflower, and many seeds still adorn stems like ornate finials.

So spring is here early, and I've begun the annual cut down not in keeping with my lazy, late March schedule. If I can let in sunlight to the bare soil now, perhaps more plants will sprout. Today I saw two silver-spotted skipper butterflies--how hungry they must be. 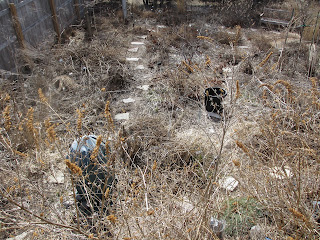 As I grasp the stiff neck of a liatris stem, it's not hard to remember the monarch that touched the fleshy sinews, that tasted with its feet the deep-tongued scent of a bloom. It is almost impossible for me to close the sharp blades of my scissors around the stem and snap them closed. The same can be said for the eupatorium that was a favorite ambush point for a preying mantis over several days. And there, beneath the shadow of a maple, I nursed back to health a transplanted milkweed. Up on the hill, the contorted tube of blue sage is an afterimage of a hummingbird, bent down just so against the wind as it reached for early autumn sun, and frozen in this position like some plastic flamingo's neck. 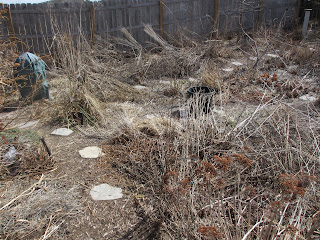 It's difficult being in the spring garden, wiping away a year so carelessly. I'm a sentimental fool. For over a year I've kept the 12' tall ironweed, laid ceremoniously against the basement foundation, tucked away like a mortar board or birth announcement. Looking at it now, two years later, I just can't break it into pieces for the compost pile. It doesn't deserve that. 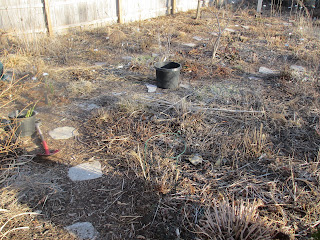 On my hands and knees I poke my head into a caryopteris and find the seed head of a last black-eyed susan. Pinching it between my fingers I rub off the seeds and toss them into the breeze, letting them fall wherever spring will have them. When the garden is empty of its autumn, flat and devoid of memory, I hope the promise of new growth will carry me past myself and into the world again--as it has each of the last four years. But I just don't know. The garden is never the same, always the same, again and never again. I put the scissors in my pocket and settle on the nearby bench. I hear red-winged blackbirds. The sun is warm. Tulips are breaking through the stubborn clay soil.
Posted by Benjamin Vogt at 4:04 AM

Beautifully written Benjamin, as befits both your chosen profession and your gardening hobby.

"The garden is never the same, always the same, again and never again."

So poignant and so true. A beautiful piece.

So beautiful. I guess I never thought of being setimental at cutting down the old dried growth; thinking of what was there.
I love the mystery of a new garden; wondering what it will bring each year.

Have to take my courage firmly in both hands and cut. Cutting back hard seems so brutal so ungrateful, and yet what a grateful response the garden gives, if I can bring myself to do what has to be done.

PR--Flattery will get you everywhere! I wish I could work on the memoir, but the blog posts are easier.
GG--Thank you ever so kindly. I feel this way every single spring.
LP--I'm way way way sentimental. Let me show you my closets.... I'm always afraid at what might come up in spring, since I have no idea what is what until it's a foot tall and too late to move.
EE--The garden is, thankfully, very forgiving. And yet, I wish I could burn it instead of clip. But the clippings are good mulch and insect homes.

Thanks for sharing your photos on GPOD - it reminded me that I love visiting your garden and I haven't lurked here in a while... I'm with you on sentiment. We cut the garden back in stages over the last couple of weeks leaving favorite memory catchers for last.

I have been lamenting this early spring as well. We did have a winter and the leaves are a mass of mush on the ground, the dried and broken stems and half eaten seed pods scattered around. And yet the ground is bursting with growth and I am reluctant to clean it up...it is never the same and I must find the courage to let the garden come into its own this year. I have cut a bit but not much. Perhaps this weekend it will feel right...at least the honey bees that are visiting have a few crocus.

Kris--I cut back in stages last year, but this year it's been so hot so fast, I felt an urgency. It's hard to keep up with blogs and visit friends--so many good ones. I feel guilty all the time.
Donna-Our leaves are just matted, not even decomposed. I've been wondering if I should just pull them up to get some light and water into the soil. I've seen many insects this week, including various butterflies!

So beautifully written! Though usually what I feel in early spring is excitement at all that is lurking beneath the soil, just waiting to spring up. The time is nigh!

Yes, that was beautiful. I don't get sentimental when cleaning up the garden for spring. I am so excited to see what all is up and growing, and you may be appalled at the way I tug on some of the old growth rather than cutting it. I found a preying mantis egg case cleaning up at church today, and propped up the branch it was on on another plant, because I had cut it before noticing the egg case. I almost brought it home, but decided to let it stay where the mother put it.

My sennas are not up yet. Are yours?

Indie--I wish the time weren't nigh, but Bill Nye the Science Guy.
Sue--Too early for senna. I tug at some of my perennials, too, I even uprooted a few. Whatever. Got plenty! And seedling sure to sprout soon anyway. Too much bending over.