This past weekend I went to Indiana for my 10 year college reunion at the University of Evansville (which has the swankiest new union I've ever seen in my life--I got shafted!). Besides catching up with several friends I'd not seen in at least eight years, I visited the LST-325 docked in Evansville on the Ohio River. And, like an idiot, I didn't bring my camera along, but go here for good ones. 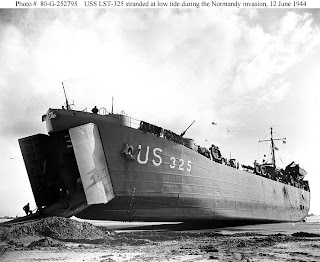 Stuck on France at low tide. Notice the blimps in the background, designed to discourage German planes from strafing allied ships.

LST-325 was in the fray landing front line troops and tanks at Sicily and Salerno. It was part of the backup "B" landing at Omaha Beach in France, but even though it didn't see the intense fighting of the first landings, I was honored to stand on the deck of a ship that made the trip, and caried wounded and dead soldiers back to England. I've been to the beaches at Normandy twice before, and it was easy to let my imagination run wild. 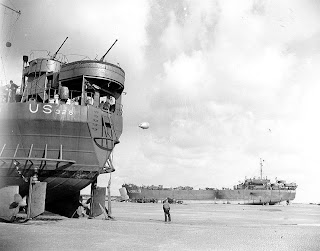 I made my wife go along on the tour, which was a fast 2 hours. I thought she'd hate it, but she kept asking questions of our super-informative Korean and Vietnam War vet tour guide--who graduated from UE on the GI bill decades ago. The 325 still houses vets who are restoring the ship, and has a working galley (spaghetti the day we toured), and a washer and dryer. Two dozen old vets brought the ship over from mothballs in Greece a decade ago, and 325 looks decent given its age. Hard to imagine 21 sherman tanks in the belly, and as many jeeps and artillery pieces and supplies on the deck. I can't imagine riding the 40 trips back and forth across the English channel during the war on a boat with a flat and high bottom--vomitous. 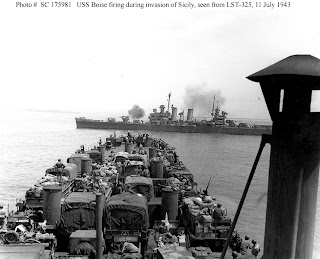 Apparently, Evansville was the top builder of LSTs during WWII, making over 500. And of course, the labor force was largely women. 325 was built in Philadelphia in 1942. Our tour guide said that at first, it took the workers 1-2 months to build one ship, but by the end of the war they'd crank one out every week or two. Amazing. Today, the old vets take the boat on tours along the Ohio and Mississippi, and other rivers. What a life, a life I'm thankful we can freely live. 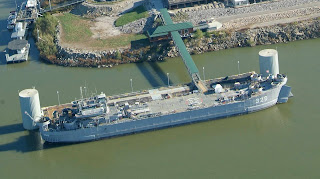 Today on the Ohio River.
Posted by Benjamin Vogt at 9:34 AM

Amazing indeed, we have no idea.

When reading stuff like this, I often try to fathom the enormous output that all sides achieved in hardware and 'material' during the last two world wars.

I know the HMS Belfast and would requently walk past her along the Thames on route to a bar I used to frequent:) that's another story.

Interesting read! My Grandpa was on an LST in the war, so this made me think of him. We should all be so thankful for these men and women!

Rob--I've always wanted to see the allied fleet on the ocean from the landing beaches, but not during the shelling. And I could go for some good English pub food right about now.
Anon--thanks for stopping by! I can't imagine serving on an LST, they look just brutal.

Thanks for this appropriate post. I have always been fascinated by stories from WWII and have lately been wondering if the call came today, who would answer.

Les--Not many. But I think today the call is different, in some ways, and it involves a momestic self sacrifice and forward thinking--somethign the governemtn does not practice so I wonder why Obama calls for all of us to do it.

You have very rich posts and really interesting to many readers. I really appreciate your work.

I'd like to request you for link back (if possible).