I have a habit of piling up mail order nursery boxes on my patio / deck. They might stay there for two months, protected from wind and rain. A few days ago, though, the last of my fall cleanup days was spurred on by 70 degrees and rare sunlight, so I went out to toss some trash and cut down the cardboard for recycling. Here is what I found. 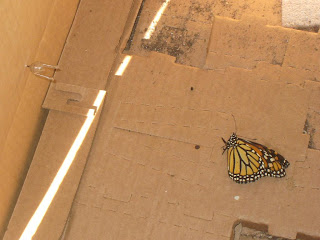 A female monarch, crisply dessicated. I'm not sure how a caterpiller found its way up the deck, up a chair, then around and into this box, because it was closed with another box stacked on top. The cat could apparently get in, but, of course, the butterfly could not get out. I wonder how long she struggled--being buried to death by her own drive to survive. And why did she have to be female? Tooth and claw I suppose, but I have a special affinity for monarchs. You can rest assured my boxes won't remained piled out there from July to September--prime monarch season for me here in Nebraska.
Posted by Benjamin Vogt at 4:06 PM

Email ThisBlogThis!Share to TwitterShare to FacebookShare to Pinterest
Labels: monarch

That really is sad :( Poor thing.

Er, how did you know she was a female, Benjamin? I hope you keep her beautifully preserved form!

:( That truly is a reason to mourn.

It's a female because it does not have scent glands on two of the wings.

So sorry for your loss.... I guess we all live and learn!

I'm sorry this happened, but hopefully her death will keep other butterflies from dying in boxes.