On a Red-Tailed Hawk, Winter Gardens, and Photos

When I first started gardening I was all "plants plants plants." Completely insane with plants. I overdosed many times a day. I have the medical records to prove it.


Obviously, gardeners eventually garden just as much for the plants and themselves as for wildlife. Having insects and animals in the garden extends it into a new physical dimension, a "Z" axis if you will (remember your high school algebra?). Sculptural plants that were kinetic only in the wind are now kinetic as they play a part in the lives of other organisms. Of course, we don't see the vast majority of these organisms, but the ones we do see give this gardener quite a high--especially in winter--and a deeper, more lush and meaningful high than just plants plants plants.

This last week or so a red-tailed hawk has been buzzing the yard. Two days ago in high north winds the hawk was floating above the garden, hovering like a helicopter, hopefully at work on clearing me of my rabbit problem (nota bene: I've not seen a rabbit in quite some time--but maybe the snow melt has something to do with this as other food sources open up). But the hawk was gone before I could move to get the camera.

Later that day I was sitting on the couch grading student blank verse poems. I saw the hawk crest the tree line 200 feet away. I knew it'd simply pass over the house as it always does. It flew quick and low and out of sight. After 10 seconds I made myself grab my camera, debating the possibility of getting a shot if it came around again. It flew by probably no more than 30' off the ground, but I knew it was long gone.

Standing at the sliding glass door there it was, perched like a giant football atop a neighbor's eastern red cedar. I couldn't believe it was balanced there. It reminded me of a Christmas tree angel hung off to the side because, if placed on the very top, the tree would bend over.

I missed the shot. As soon as I snapped off my SLR cover the hawk was leaping into flight. Below is what I got. 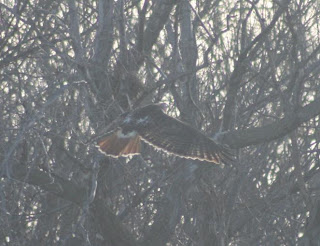 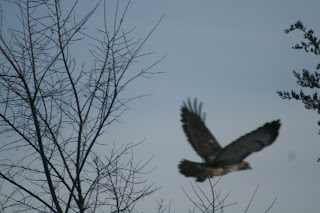 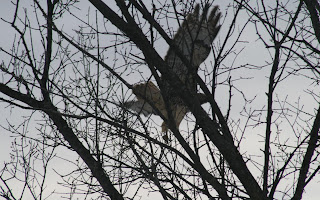 In the dead of winter I get the fullest, bare-bone understanding of where I am, and how I and my garden and little 1/4 acre homestead are connected to the larger world. A hawk passes over my yard in a second. In one minute how much more has it experienced than me? Whose perspective is deeper and richer? Whose life would suffer more for the lack of the other? The answer to that last question should be obvious.

(And does anyone want to start the conversation about how we must take photos of objects and events we value? How that is an act of ownership and appropriation? How once we have that image safe and secure in our clutches another experience with that object or event seems less meaningful?)

Our Favre who art in Minnesota, hallowed be thy name. Thy bowl will come, it will be won, in Miami as it is in the Dome. Give us this Sunday our weekly win. And give us our touchdown passes, as we forbid those who try to pass against us. And lead us not into frustration, but deliver us to the Super Bowl. For thine is the MVP, the best of the NFC, and the glory of the Purple People Eaters now and forever. Amen. 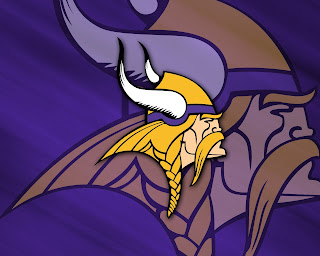 Or, studies in wildlife. I'd never seen a common / northern flicker before. Look at these great closeup shots I got, courtesy of my new birdbath heater near the patio door. 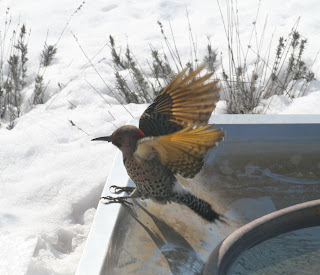 This is the most beautiful bird I've seen in my backyard. And did you know they're considered ground woodpeckers? First time I saw this guy swoop through the yard I thought we had a hawk. 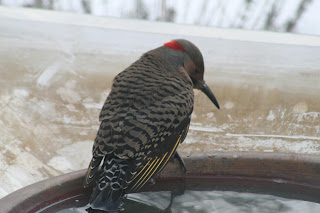 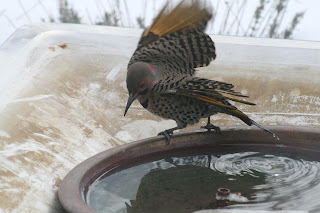 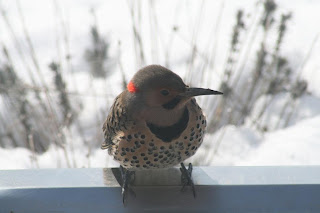 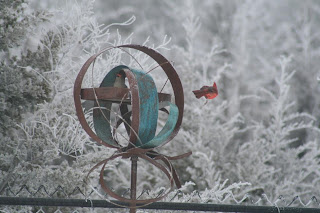 Floating cardinal. Most of the cardinals here are magicians who were scheduled to appear on Conan O'Brien in March, but.... 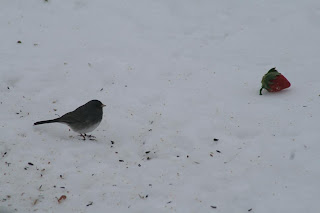 Junco v. strawberry. Who will make the first move? 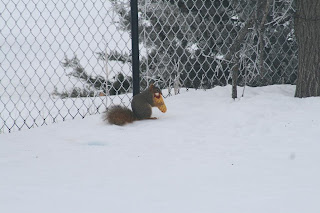 The squirrel soon ran up the elm and into the cedars with its catch of the day. After pillaging the bird feeders. 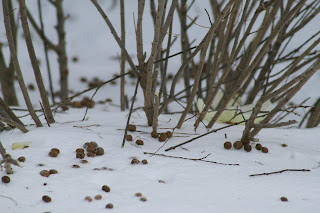 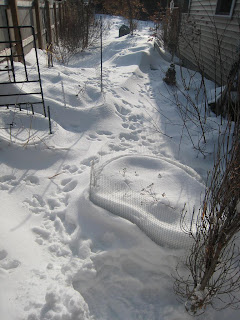 The chicken wire around the shrubs, to keep the wabbits at bay, caught the snow most interestingly. That's a 3 foot drift on the right by the arbor. We've had almost 3 feet of snow already this year, 15 inches above average. 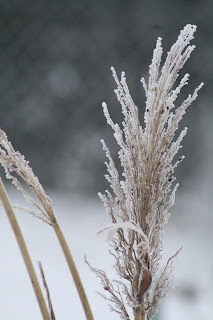 With the snow melt during the day, and hard freezes at night, ice fog / freezing fog develops. This is another reason not to cut back plants in the fall. The last two mornings every object has been covered in a frothy white that is stunning in the sunlight.

Naked in the Snow Garden

It would not have felt uncomfortable today. At 40 degrees, my 12-36" drifts are settling fast, and I had my coat unzipped and my gloves off. This time of year, no gloves feels like freestyling.

By the way, do you know what blank verse is? Tomorrow, the second day of poetry class, is traditionally the hardest day for my students--followed closely by the third, fourth, and fifth day. And likely the sixth and seventh. Good to get it over with early in the term. On the first day only 1-2 knew what blank verse was, and these were former students of mine. Can't write poetry without knowing the forms, let alone what a tercet is (another question only one student volunteered a guess at). Favorite part of the term for me because I am 100% sure they're learning something tangible they can use to become better writers.
Posted by Benjamin Vogt at 4:54 PM 4 comments:

I'm gonna ramble about my garden design. It might not be elegant, but since I have to be smart next week as a teacher again, I'm feeling a bit, oh, je ne sais quoi. Grrrr.

1) Next time I start planting a garden, shrubs are the first priority. This is made obvious by the fact that for 4 months in the spring and summer my garden looks more like a field of dandelions. I'm talking height here. Even texture. It's most disconcerting. Blah blah blah. No structure or interest. (I do have around 20 shrubs out there, mind you.)

2) As a play off of one, I want to add a yellow twig dogwood in a position now occupied by the most slowly-growing 'Isanti' red twig dogwood I've ever seen. It's sibling 20' away gets less sun and is easily three times as big--both were planted on the same day. Deal is, any yellow twig dogwood, even some of these smaller varieties, are just too big. At least, too big in the summer. Come winter, the garden--being overly perennial--looks like a desert of brown vomit. So, in the winter, it'll work. But perennials are neater in the late summer and fall--my fall garden is heaven. The 'Isanti' began to get crowded out this year by wild bergamot, iron weed, eupatorium....

A person just can't go plugging shrubs back into a nearly established perennial garden. It's like putting a baby back into its mother.

3) Trees. More trees. Charming, different, butterfly and bird attracting small trees that grow. See, I got this 'Coralburst' crabapple I rescued for half off from Home Depot. Deal is, it grows slower than the 'Isanti' dogwood. It's even refusing to root well. So I made the mistake of planting a ninebark by it. Already I am envisioning what 2010 will look like in this corner of the garden--crabapple in a ninebark. Maybe it will be a new design fad. Did I mention a 'Snowbank' boltonia is on the other side, and that I hate to cut it back because I like those puppies tall? Crabapple sandwich.

4) A higher fence. Much higher. Say, 30'. Neighbor's dog toys shall not bombard my garden like meteors. Better, yet, a moat. A 5 acre moat.

Machine guns that sense movement, zero in, and blast tennis balls out of the air seem appropriate. I've seen these on Ebay.

5) The garden is too small. Not really. But it is. To have shrubs I need fewer perennials. This won't happen. I had so many more insects this year as my perennials matured. Butterflies galore, honeybees en masse. I am becoming entangled in the web of my perennials.

I need more shrubbery to detox me. Ni!

6) Machine guns that also target rabbits. However, I am getting some winter trimming done on my willow 'Nana' don't you know. However, the trimming is becoming most over the top--as in, where did that half of the willow go that was there yesterday?

7) A divine number. What I feel most stupid about is basically a design quandary. Most designers say that in a smaller space like mine (is 1500 feet small?), you should go for repetition, use swaths of the same plants, or at least similar textures and colors. Whatever. I don't think my garden--or most prairies I've seen--look like cottage gardens, so what do I have to fear? But, I do have repetition in plants around the garden, just not together. Is it cohesive enough, or too chaotic to the eye? I'll find out for certain this year, barring a hail storm.

A private backyard garden cannot be a prairie. I'm learning this painfully slow. Native plants or not, I have a manicured garden like those English uptight snobs who have poisoned this country's sense of its natural and ecological self. You can check me on this if you want, because I'll agree with you tomorrow. Hate mail from England in 3, 2....

But I worry too much. I think about my garden late at night when I can't sleep, thus making me stay awake longer doing calculations and line drawings and doodles of shrubs in my head. Let it go. If you love something, just let it grow.
Posted by Benjamin Vogt at 8:17 PM 17 comments:

On New Year's Eve I found out my 2nd chapbook will be published by Finishing Line Press. Hopefully, Without Such Absence will come out this summer. I just don't know yet. It's a solid press, good list, nicely designed little books, and they are on Amazon and do some other promo unlike most other chap publishers.

So, I will eventually need to sell some books, especially pre orders, which determine the press run. The more pre orders, the larger the press run (and the more books I get free to sell myself at readings and such). If you'd like to be notified via postcard when the presale will begin--this spring sometime--email me your address. There will be some gardeny poems included in the book, which will be around 30p, and a few poems from it can be found here.

AS FOR THE PREVIOUS HOLIDAY, it was the first time the inlaws spent Christmas with my parents, and it went very well (whole family together--very cool). On the drive back to Nebraska, my wife and I counted SEVENTY (70!) cars, semis, Uhauls, and pickups along the edges of I-35--some right side up, most on their sides or upside down, and many groups of say 3-6 cars. 12/25 saw a blizzard of 1-2 feet I'm glad I wasn't driving through.