This is such a powerful little conservation story Leopold tells -- I just love the simultaneous sadness and joy it evokes (as any piece of good writing should do). How do you feel about it? I think I'll schedule this post to go live at the same moment I'll be listening to Wes Jackson of The Land Institute speak.

Every July I watch eagerly a certain country graveyard that I pass in driving to and from my farm. It is time for a prairie birthday, and in one corner of this graveyard lives a surviving celebrant of that once important event.

It is an ordinary graveyard, bordered by the usual spruces, and studded with the usual pink granite or white marble headstones, each with the usual Sunday bouquet of red or pink geraniums. It is extraordinary only in being triangular instead of square, and in harboring, within the sharp angle of its fence, a pin-point remnant of the native prairie on which the graveyard was established in the 1840's. Heretofore unreachable by sythe or mower, this yard-square relic of original Wisconsin gives birth, each July, to a man-high stalk of compass plant or cutleaf Silphium, spangled with saucer-sized yellow blooms resembling sunflowers. It is the sole remnant of this plant along this highway, and perhaps the sole remnant in the western half of our county. What a thousand acres of Silphiums looked like when they tickled the bellies of the buffalo is a question never again to be answered, and perhaps not even asked.

This year I found the Silphium in first bloom on 24 July, a week later than usual; during the last six years the average date was 15 July.

When I passed the graveyard again on 3 August, the fence had been removed by a road crew, and the Silphium cut. It is easy now to predict the future; for a few years my Silphium will try in vain to rise above the mowing machine, and then it will die. With it will die the prairie epoch.

The Highway Department says that 100,000 cars pass yearly over this route during the three summer months when the Silphium is in bloom. In them must ride at least 100,000 people who have 'taken' what is called history, and perhaps 25,000 who have 'taken' what is called botany. Yet I doubt whether a dozen have seen the Silphium, and of these hardly one will notice its demise. If I were to tell a preacher of the adjoining church that the road crew has been burning history books in his cemetery, under the guise of mowing weeds, he would be amazed and uncomprehending. How could a weed be a book?

This is one little episode in the funeral of the native flora, which in turn is one episode in the funeral of the floras of the world. Mechanized man, oblivious of floras, is proud of his progress in cleaning up the landscape on which, willy-nilly, he must live out his days. It might be wise to prohibit at once all teaching of real botany and real history, lest some future citizen suffer qualms about the floristic price of his good life.
Posted by Benjamin Vogt at 10:00 AM 3 comments:

It's Earth Day, a recognition that I feel has become as regimented, stilted, and looked over as Flag Day or Professional Assistant II Day (formally Secretary's Day). I'm by nature an introverted, melancholic, misanthropic guy; I contribute to the degradation of this planet. I'm sucking energy from coal-fired power plants right now, a resource ripped from the earth like a kidney from an abducted person for the black market organ trade. My natural gas heat just kicked in. I'll drive five miles to work in my 27mpg car. I'm sure I just ate tons of gmo junk in my blueberry muffin.

In the last day Lincoln has received over an inch of rain -- this is a miracle after last year's 12" drought which is now down to about 8". It's cool outside. The plants are barely poking up, but at least it keeps the anxious lawnmowing husband inside another day or two. I celebrate the rain as the plants ease into another potential drought.

Out here on the Plains high commodity prices are obliterating the last remnants, and I mean remnants, of the tallgrass prairie, and continuing to erode the arid mixed grass prairies. Last week in a class the same old topic came up from students, "Don't we need corn for food?" No. The beef industry needs it to fatten up cows who will some day clog our arteries. Feed lot owners have us wrapped around their fingers, then by extension big agricultural where a few large companies own the entire flyover country, pumping us full of corn syrup, spraying gmo crops that can take pesticides -- unlike the thousands of insects species, unlike milkweed that supports a monarch butterfly population on the brink.

The only hope environmentalists point to is humanity's capacity for emotion and logical thinking, sympathy, reflection, a brain so adapted and powerful it can do anything. Well, it can do anything, but it doesn't. It's easy not to care, not to fight, not to change because, in part, giant corporations have in essence written the state and federal laws that make it so hard for a common person to fight. Change never comes easy, I suppose, and most certainly not good change, not freedom, not the ideals this country presumes to be based upon.

I feel like a serf in a corrupt lord's kingdom. An Indian fighting British rule. A monarch butterfly tiring out, darting and circling among homogenous and barren fields for any milkweed at all.

Gardening is an act of defiance. It is as violent as storming the gates of congress or chaining one's self to oil pipeline equipment. Planting heirloom and organic vegetables is a flipping of the bird to Scott's and Cargill and an embracing of our respect for the planet that sustains us. Planting nearby pollinator-attracting plants like aster, milkweed, ironweed, joe pye weed, mountain mint, and coneflower will increase the number of insects -- the base of so much life in the world.

Touching the soil is recalling a memory as rich and soothing and mesmerizing as being in the womb. Dirt under our nails invokes a primal memory, a latent gene we shove forcibly to the side when we plug in and tune out, when we give up and head indoors, or insist on battling and subduing our suburban kingdoms with petrochemicals and lawns. Gardening is warfare. Gardening is a battle. Native plants are a flag placed on a hill, a line drawn across the Jeffersonian grid that blankets our nation. Gardening is an act of democracy, it produces freedom of body and mind and soul. Gardening brings us home to the pulse of bumblebee wings celebrating with us the power and the glory of creation, and our ability to use our best selves to liberate the planet, which in turn liberates ourselves.
Posted by Benjamin Vogt at 9:54 AM 3 comments:

I hope you'll come talk to me at two local events this next week. My native prairie plant garden coaching business, Monarch Gardens, will have a table at:

Spring Affair plant sale, Lancaster Events Center -- 4/27, 9am to 4pm, free. The largest plant sale in the Midwest (get there early and wear padding or body armor!). Lots of vendors selling even more garden stuff. 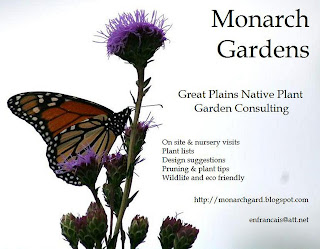 Posted by Benjamin Vogt at 8:49 AM No comments:

Last Saturday I read from my new poetry collection at the Nebraska Book Festival in Omaha, and before the reading my wife and I swung by Lauritzen Gardens for the Nature Connects exhibit. Being a Saturday, the place was swarming with kids admiring the LEGO creations. Some day, I'll have a LEGO room again. 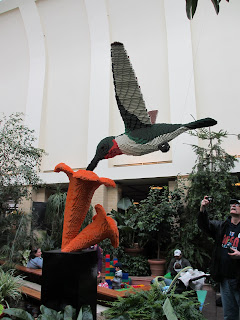 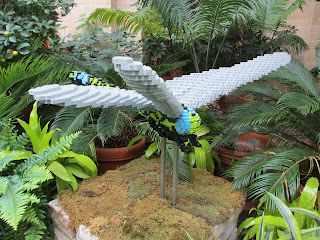 A dusting of snow also left this on the last of the iris out back: 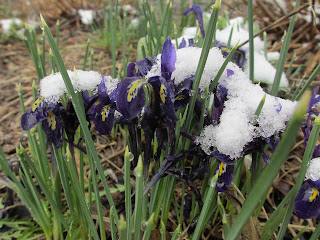 As for life, let me tell you. It's insane. Teaching four classes with lots of prep and grading, giving talks on native plants, garden consulting, planning a trip, putting together two books with a hint at a third, trying to figure out the next stage in my life, what to risk and how much. You know how it is. I hope I'll see local folks at Earth Day on 4/21 in Antelope Park, and again on 4/27 at Spring Affair!

As the air warms I fall in love again with a new season. It's unlike fall, which is my deepest, most passionate affair every year. Spring is more a delirious spark of temptation. Yesterday I sat on a stone in my garden, about twenty feet from the bird feeder. Juncos, grackles, finches, sparrows, mourning doves, blue jays -- everyone was there. They darted from the feeder to the last cover in the garden I've not yet cut down. One junco would call and suddenly the rest joined in, a loud crescendo like a wave over the landscape.

The crocus are nearly gone. The iris reticulata are bending over to touch their sweet-smelling petals to the soil. The other day I passed people embracing beneath a crabapple that will soon bloom. On campus the shorts and flipflop set are in full flare. It seems that any touch, any smell, any sensory perception can creap up on me and suddenly catapult me into another plain of existence. I don't know why. I don't know how a season does this, let along a walk in the prairie, the bluestem grazing arms, a butterfly settling on a shoulder.

"Suddenly I realize / that if I stepped out of my body I would break / into blossom." Those are lines from James Wright's poem A Blessing.Yet I fear that blossoming, too. It exposes me to the world in an overt way. I could have never been a flower, seductive, flamboyant, having so many insects reach into my heart like that--I'd grow fond of each one and feel the loss deeply when they left, hundreds of times each day. I couldn't be spent like that, yet this is what spring promises -- giving one's self up in the hope of a glorious fling, the shedding of our conceptions about self and world. Let go, spring says. Fly away and taste the fleeting nectar of a coneflower or prairie clover. Settle into the bloom and listen to the hum of wings crashing against the shore of senses we don't fully know but feel pulsing subtly within everything.

See the bee on the iris, nestled between the lips of petals, rubbing its body like a violin bow against the pollen? Carry the world home with you. Be at home in the world. This is your one great chance to be born again. 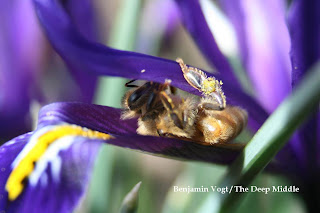