Every True Moral Act is Made in Freedom

For years now I've been waving the flag about garden ethics -- how empathy is at the heart of how we should be gardening. I'm always looking at how others speak to our environmental world and how we live in it, and this piece resonated, especially the last paragraph:

"We are empathic beings. As such we are profoundly connected to other human beings, as well as to all of nature. We can feel the joy and suffering of others, and as innately moral beings, we seek to mitigate suffering and promote the flourishing of others, even at a cost to ourselves. True morality carries the marks of insight and imagination. Every true moral act is made in freedom. Yes, we are informed by experience and the values of our society, but ultimately through self-knowledge, we have the potential to become free of their determinative force and choose the good (or evil) freely. In my view this is the moment in which love takes on the character of knowing.

Love allows us gently, respectfully, and intimately to slip into the life of another person or animal or even the Earth itself and to know it from the inside. In this way, love can become a way of moral knowing that is as reliable as scientific insight. Then our highest challenge and aspiration is to learn to love with such selflessness and purity that love becomes a way to true moral insight, one that transcends social construction and biological imperatives."

Put your faith in people or the systems we've created to govern ourselves and our world, and you'll be disappointed more times than not. Put your faith in what you see, taste, touch, and feel -- in the real, literal world around us -- and your entire being is lifted with purpose, joy, and centering strength. I just came inside from trimming trees and listening to the wings of two hawks slap against the air above me. I just came inside from tasting dust and broken leaves in my teeth. I just came inside from my cat running across the garden with the greatest speed and joy I've ever seen, and he's almost 15 years old. I'm going back outside and I'm never coming in again. 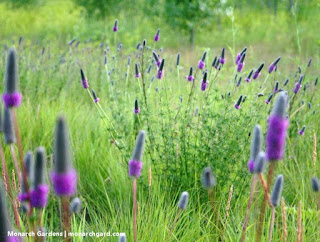 Celebrating the Past Present Prairie

Today is my grandmother's birthday -- it's easy to remember because all of the numbers are the same. She would have been 94, and in fact, it's been almost 10 years since she passed away. As her only grandson I often felt like I had a place of honor or responsibility (often unfair to my siblings and cousins). See, Grandma always wanted to teach me about our family's past, about who she was and where we came from, how she and her ancestors lived as estranged German-speaking Mennonites in Oklahoma. I never listened for very long, was often bored because I was too young, and I always hated Oklahoma (the heat, the wind, the flatness). But the tables have tuned and her wishes have been granted -- I am the keeper of our family's history, and I can't get enough of it or Oklahoma, a place so stunningly-ecologically diverse. I have a 90,000 word memoir in draft form about immigration, prairie, wildlife, land allotment, oil, outlaw gangs, the Cheyenne, and more.

Whenever I visit my folks I rifle through drawers and closets for relics my Grandma held on to. This weekend I found the below image, which on the back simply states that one of the women pictured is Katie Peters, who is my great grandmother. I don't know the date, so she could be anyone. Still, these are my people, who plowed up the prairie and helped conquer the last "wild" places in the central U.S. with sweat and hunger and hope -- even as the hope of other cultures (human and plant and animal) were marginalized. I honor my family, and with my work in prairie advocacy, I honor the wild places hungering to come back with their full resilience. In a way, I've been given an opportunity by my ancestors to heal the misunderstandings of people and place -- not to condemn or undermine what they sacrificed, but to fully come home to the places where they sought refuge and freedom. Our lives are imperfect circles made whole by questions we can never answer. 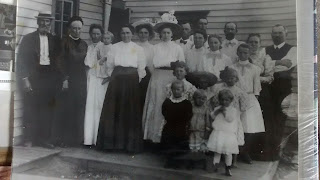 Wow, what a week! I'm so glad I stopped being a part time college teacher (dead end job, but always wonderful students) and decided to go full time into garden design and speaking! Terrifying, liberating, hopeful, purpose-driven faith. This week:

1) Confirmed a talk in Indianapolis for October.

2) Spoke with a local organization about doing native plant pollinator talks and short videos for them.

5) Invited to contribute to an anthology.

6) Helping start a local ecotype advocacy group in Nebraska for seeds and plants.

7) At Monarch Gardens I made live pre-planned garden designs to help folks get started with a native plant bed for any of 6 site conditions. If you get my newsletter you also got a discount code for those (as well as for the online classes).

Prairie up, people!
Posted by Benjamin Vogt at 9:23 AM 1 comment:

Into the Prairie Echo

Spending a small amount of time with my 85,000 word Oklahoma memoir, a draft that's been silent on my computer for three years now. I come across two excerpts that resonate today:

A bison bull is standing 30 feet from the car. Straight on, it looks narrow though quite tall. The perspective changes when he slides to his right and gives us the long, full angle of his body shedding the winter coat. A massive hump of muscle on his back supports his equally massive head as it sways back and forth over grass, dipping into the sinew of blades and blooms like a wobbly pumpjack. I’ve never been this close to a bison. I’ve read enough stories to know to stay in the car – a mature bull can weigh up to 2,000 pounds, more than half this sedan.

I’m snapping a photo every five seconds in a gap between the A-pillar and my wife, who is leaning all the way back in the passenger seat while she balances her camera out the window. I’d seen a herd in the Tallgrass Prairie Preserve in northeastern Oklahoma, but that was at a distance of a half mile. I want to reach out and touch this bull’s crown, which is like a mane right behind his horns – it’s as fluffy looking as a shag rug. Occasionally I can see his eyes, big and dark, but dwarfed by his forehead. I can’t tell if he’s looking at me, or just coming up for visual air. I can hear him eating. I can hear him eating.

It’s a dangerous thing being lost to the horizon. Walking any open field we are both compass point and sun dial, searching for home in the time allotted us on this earth. At most we will discover that while alive we’re as ethereal as a memory. Cross paths with a mountain lion or sandhill crane or butterfly or prairie dog and we will know the silence we carry inside, the silence we insist upon field after field. There’s nothing here because we made it so. Our absence is present in the rows stretching to infinity off the highways and county roads.

But stop. A dung beetle is moving from shadow to shadow underneath the sunflowers, pushing its brown marble over pebbles, past cracks, and through thick brush. When I was a kid I’d sit near an ant hill—the inverse funnel pushing out ants like a great heart pumping blood. Each body scatters in every direction, following the marked trails out beyond the center of their lives. Can you imagine being an ant or a dung beetle? Can you imagine? You have never been anything else, following the narrow path laid out for you, but pushing your burdens before you like they were the only treasure you’d ever had. When we enter the earth from another perspective we become our truest selves—we give up the right to take away other lives and enter into an unwritten contract that we signed at our births. We are here, made of the same stuff as everything else. We are here for only a moment, too, already absent in our presence until we go mad with the terror of our short lives and break the contract. The only way to rewrite ourselves is to walk the horizon, with seed in hand, until the prairie comes back.
Posted by Benjamin Vogt at 9:24 AM No comments:

The below is taken from a ruminative essay on the term "natural resources," which has so many sinister and unhealthy connotations full of exploitation and navel gazing. But in this snippet I see how we should approach garden design:

"It is how we represent, and thus come to know, the things we manipulate, that influences the nature of our acts. Do we take from nature with respect and with love in our hearts? Or do we do it with a self-interested utility, that is over-intellectualized by economics, resulting in the bastardization of our evolutionarily functional greed? I believe that if we come to understand these subjects as treasures, our processes are more apt to be respectful and loving, leading us on a decision-making path toward understanding the other subject on its terms, rather than only on our terms, or exclusively in human terms."


Posted by Benjamin Vogt at 8:53 AM No comments: