I know that no one else is doing some sort of retrospective, so you can't possibly be sick of this shtick. Fiscal cliff. Mayan apocalypse. (Link on over for last year's garden review.)

This year I gave several presentations on native prairie plants, started a garden coaching business, my garden was featured online at Fine Gardening and in the Omaha World Herald, people called me for interviews about gardening (still floored by this), and I started writing a Great Plains gardening column for Houzz. I've also agreed to be on the board of the local Audubon chapter, Wachiska, which works to preserve prairie remnants.

So, without further obvious navel gazing, here are over 30 images from my gardening year.


So my goal / hopes for this year are trimmed down, yet still quite massive:

1) Finish a solid first draft of the Oklahoma memoir (hopefully in January!), then a final draft by summer.
2) Find a press for Gardening Wild: How to Grow Sustainably for Butterflies, Bees, Birds, and More
3) Find a more secure job with benefits. Teaching would be most fine.
4) Move to an acreage if #2 pans out. Begin prairie restoration. Begin plant raising to sell at farmer's markets. Build artist sheds for residencies on acreage.
5) Begin writing two experimental nonfiction books and one children's book.
6) Watch my wife get her PhD. And maybe we'll both get jobs (here's our joint job ad).

A Blizzard of Birds

The forecasted 6-10" never happened, just about 4" or so. But we finally stopped our record of days between snows at 305 or 310ish. After the "storm" we had dozens of birds -- folks, this is why you leave the garden up in winter and provide a source of water (and food if you want to maintain the feeders). Tons of birds dashing in and out of bent indian grass and joe pye stalks, hopping over drifts, diving from tree to tree.

Every day I walk past the newly-expanded power plant at the University of Nebraska. After the sidewalk and street were torn up, the landscape needed mending. Although I'd have to say UNL's landscape is more progressive than most--including scattered beds with modest native plantings and sculpture--they too often succumb to the same old boring, outdated 19th century English blind lunacy of American landscape design. 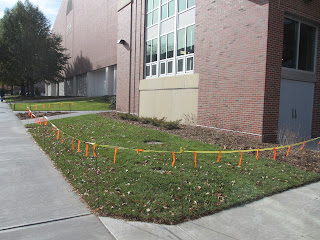 This new sod--not even drought-tolerant buffalo grass--is wasted space. Every day thousands of people walk by and get nothing. No connection to place, environment, or nature. If anything, a power plant needs a good disguise, which means a nice little short grass prairie. No one will ever use this lawn, but it will be watered, fertilized, and mowed religiously, wasting resources, polluting the environment, et cetera. Plant it in a mix of wildflowers and grass and you only have to tend to it once a year for about ten minutes. 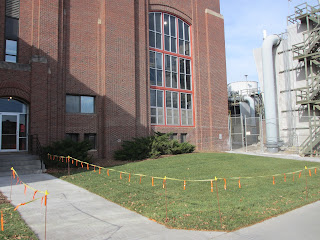 I can't tell you how many times I have a student read a "nature" poem or essay and they can't connect--they have no shared language, no genuine context. It's been beaten out of them. Their idea--our idea--of nature is a farm pond, corn fields, trees in a park, or just opening the door. It's not more than a human-made backdrop. When we go outside to write they seem genuinely uncomfortable. I think most of us do. But once they begin to let go the floodgates open--human thought and emotion intertwine with whatever nature is available at the moment and good writing blossoms. We have nature deficit disorder.

If the lawn in front of the power plant at UNL was 200 square feet of sweet-smelling prairie forbs alive with songbirds and butterflies, I think that would rub off on passing students--something would stick and switch in them the whole day; all of their perceptions, their whole approach to life would subtly change for the better. They'd be more creative and open. They'd feel more alive, connected, and like they belong. I can tell you, that sense of belonging is what's most at stake (especially for freshman), and why we so often resort to direct and indirect violence. Without genuine experience with nature we are lost.
Posted by Benjamin Vogt at 12:19 PM 7 comments:

Job Ad For My Wife and Me

Benjamin Vogt and Jaclyn Cruikshank Vogt invite applications from colleges for two tenure-track assistant professor positions: one in creative writing (poetry & nonfiction), Native American literature, and environmental literature; the other in twentieth-century American literature specializing in women's and gender studies, ethnic literature, and with an interest in digital humanities. Both have taught a full array of courses and have a PhD in their field with a collection of books, journal publications, conference presentations, departmental service, teaching awards, fellowships, and scholarships, along with employment in marketing, journalism, editing, writing centers, and esl tutoring.

Successful colleges will be in the upper Midwest, rural or semi urban, diverse, flexible, creative, and academically rigorous while encouraging multiple perspectives, thinking outside the box, and offering interdisciplinary courses. Preferred qualifications include an integrated study abroad program, collegial faculty, an innovative benefits package, and an ecologically-progressive campus. Colleges may apply by emailing bervogtATgmail.com and attaching a letter of application with department philosophy and mission statement. If interested, we will proceed by sending you more information, including vita and teaching portfolios. Applications will be accepted until positions are filled. The Vogts are equal opportunity employees, encouraging applications from diverse candidates.
Posted by Benjamin Vogt at 9:26 AM 8 comments:

Ran across this article. Says a lot we already know, but has new tidbits, too. Besides, can't harp on this enough. Reminds of the Bible quote that goes something like "what you do the least of these you do to me." It says a lot that we don't have to live like we do, but we choose to. No wonder we kill each other, have kids born as meth addicts, can't trust a government to get things done amicably and for the greater good when we're too blind by our own immediate concerns.


“Monarch butterflies warn of what might lie ahead for other wild creatures affected by overfarming and deforestation,” says Chip Taylor, professor of insect ecology at the University of Kansas in Lawrence, who founded Monarch Watch in 1992.

“It’s clear that this year’s total population is down, and that the overwintering group that just arrived in Mexico is among the lowest ever recorded.”

The devastating reduction started 15 years ago—very recently in the monarch’s long history. An estimated 250,000 years old, this species predates modern humans by 50,000 years....
In March, a University of Minnesota study linked 10 years of monarch decline to glyphosate, the most popular herbicide in the United States, used in brands such as Monsanto’s Roundup. An estimated 84,000 tons of glyphosate are applied annually to soybeans, corn and other U.S. commercial crops. On top of this comes 3,600 tons used in the home and garden sectors, and 6,800 tons used by private businesses and government agencies.

Though glyphosate may be a boon to farmers and landscapers, it is killing milkweed—normally among the hardiest and most stubborn of plants—in record numbers. One recent study found that the milkweed population in the Midwest plunged 58 percent from 1999 to 2010, and that as a result, monarch egg production plummeted 81 percent.
Posted by Benjamin Vogt at 9:19 AM 5 comments: