I see my garden as an act of compassion and justice. Instead of the tyranny and supremacism of lawn or mulch, there are diverse beds of flowers, grasses, shrubs, and trees. Wide varieties of wildlife throughout the year call the garden home, and I am enriched by their presence and their cultures, not diminished. Together the world and I meet in the garden, we embrace, we commune, we share our hungers, our losses, and our joys. Without the garden I would not know that equality and freedom are milkweed, bluestem, aster, and oak. Without the garden I would know less of the common language that binds us all together.
Posted by Benjamin Vogt at 2:32 PM 4 comments:

From chapter 5 of my forthcoming garden / nature / philosophy book:

"Native plants are the tip of a much larger iceberg. The conversation goes well beyond what is native and why or how gardens work. The very fact that we keep having this conversation in writing and seminars and podcasts, and that it makes some in horticulture uncomfortable, is evidence that we need to be having even larger conversations about why we garden and who we garden for, and what it means in a time of climate change and mass extinction. Our culture needs to be confronted in as many ways as possible for the sake of future human and non human species."

And how about a picture from our ice storm this month -- because it won't snow this winter. More are at Instagram. 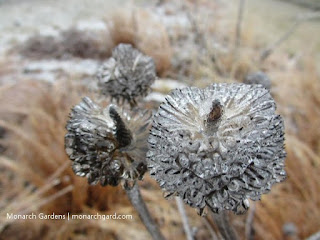 In most cases, people will tend to believe what they already believe, unfortunately. A core part of my forthcoming book explores the psychology of climate change and environmental issues, which I link up to what often becomes a very heated, very polarized conversation around native plants. I postulate that one reason the native plant conversation becomes either / or relates to how our minds have evolved to process new information as animals, and especially how new information tends to increase risks on our perception of self and our belief about cosmic order. Any time we face conflicting information our brains immediately put up defenses to protect us; any new perspective threatens our carefully balanced sense of right and wrong, our social and cultural beliefs, and our very ethics (and ethics that can't evolve fast enough with technology or climate change). I think the real mystery is how some people can quickly embrace new ideas, analyze, process, be open, and then if necessary reorder their beliefs and cultural viewpoints.

Where am I going? Several times over the past year I've heard folks profess that Doug Tallamy -- native plant and pollinator researcher guru extraordinaire -- has toned back his viewpoint at speaking engagements. In particular, he's become more open to mixing exotic plants and natives in built landscapes, like urban gardens. I don't know if this is true, as it's been years since I heard Doug speak, and I don't know how much of this new change is filtered through folks who previously decried everything Doug said about native plants because, perhaps, it was threatening to their worldview, profession, culture, et cetera. What I do know is that it seems, from my small data set of individuals, that the more Doug apparently opens up his hard-line stance toward using native plants only, previous critics are now pointing to him as a reputable source. I find this shift psychologically fascinating, and would like to learn how to exploit it.

The power of Doug's message has always been one rooted in an activism based on a shift in our ethics, and I think his audience has always been the more progressive regular Joes among us (I'm not one of those Joes, or Janes). Even while his research has asked the horticulture industry to evolve, and they've listened in some ways, I believe his audience has always been homeowners -- and I think this is still where the greatest power resides. It's homeowners who are going to put pressure on the green and landscape design industry to build sustainable wildlife gardens in urban areas, and this sort of grassroots mobilization has always been what's worked -- from other environmental issues to classism to racism to sexism. No doubt we need large design firms to step up and give us moving, functional examples to emulate at home, and that we need tons of them right now, but I'm not yet sure how large their role will be from a cultural shift perspective (this isn't a knock, I just don't know because the majority of new urban areas are still designed in old school methods).

It's my hope, and my goal in the way I've organized my book, to re-energize and go a step further in cultivating a bluestem roots progressivism in garden design, and one that sees itself using the tools of other social and environmental justice movements. It's through such action that we learn to think more critically and begin to challenge and remold our animalistic brains that struggle with the long view, as well as the compassionate view for others -- and other species. I may fail horribly, though, and I can accept that if it happens. I will certainly turn on some folks and turn off others as I seek to complicate, invigorate, and push the garden conversation onward. But I hope that together we can all finally leap into a garden ethic that radically reunites us with the world again, because the real world is quickly drowning in our disconnection with it. It will take all of us together to bring wildness back into our everyday lives as well as in wilder places beyond our everyday lives. It will take homeowners, architects, nurseries, municipalities, federal or state government, and activists / artists whose job it is to make us feel uncomfortable and to speak up for the voiceless in our culture.

What a Year It Will Be

Many new garden design opportunities are coming up, which excites me as I marry that burgeoning practice with the activism I profess in my forthcoming book. I'd still like to get a summer speaking gig on the books, and even one in the fall, as I have three in spring (Iowa, Wyoming, Michigan).

In the meantime, I'm celebrating my favorite social media platform -- Instagram. Here are the top 9 photos of 2016. Have a  favorite? 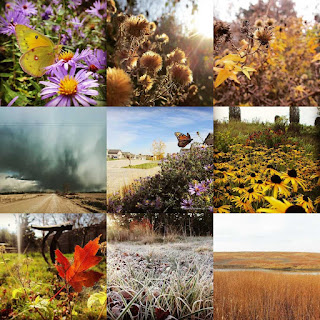