Rebuilding Prairie at Home and Beyond

There are times people think I'm too extreme or passionate about native plants, wildlife, and conservation. But if you read this article you'll see why, and it's totally based off of where I'm from. I live on the edge of the tallgrass, an ecosystem pretty much wiped out by our arrogance and misunderstanding. But just to the west is the most well-preserved prairie ecosystem, the Sandhills. As land managers work to restore fragments, they are rebuilding the connective tissue that wildlife need as ecological resilience returns to the Plains. We can have an important echo in our urban world, as well, especially in the former tallgrass region -- an echo that teaches and empowers us to garden smartly beyond the fence line.

If we experience and know our native wildlife in the urban world -- if we see it every day on our way to work, through office and school windows, at church, when we shop, and as we eat lunch -- then we will understand wildness not as unruly or outside of us, but as an essential core to our existence. More urban prairie might mean more rural prairie, and that will create a healthier, more resilient world for all of us.
Posted by Benjamin Vogt at 9:17 AM 3 comments:

Oh So Many Sandhill Cranes!

Every year we drive 90 minutes west to view one of the coolest bird migrations on the planet. And every year before we go I wonder -- why bother? Why do people go year after year just to see the same thing?

And then you stand out there among wave after wave of tens of thousands of birds, each calling out to the other with loud, ancient voices that echo from horizon to horizon. You feel the cool south breeze against your face, knowing that if you, too, had wings it would take very little to lift off with the flocks and settle toward the Platte River for night. There, among birds that mate for life and have been coming through this small area for millions of years, you feel power rise up within. Power you never knew you had but suspected was there. The power is joy and it is also rage. The power is compassion and defiance. You want to go screaming into the nearest city, asking why we pollute, why we turn over the earth, why we have lawn, why we don't see the community as preservation and healing for the self.

So every year we will go see the cranes to be reminded. And we will hope to be reminded in other ways as hands hit soil, place plants for butterflies and bees, and travel to meet new people who have the same power resting inside. Each turn toward wildness is an act of defiance -- and the most profound love one can have. 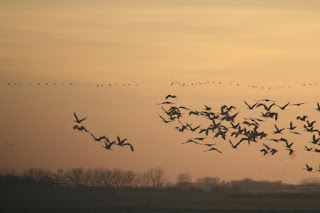 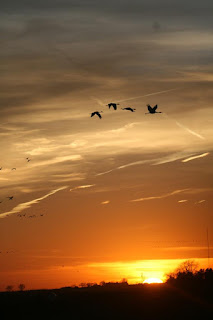 Posted by Benjamin Vogt at 5:39 PM No comments:

The recent Cheerios-sponsored wildflower giveaway to save the bees was fraught with problems. First, saving the bees does not mean honey bees, which are imports and globally stable. Honey bees also out compete are more valuable native bees for resources while spreading disease. Second, many of the seeds were exotics, some invasive. And of the native seeds included, they may or may not be native across the country, thus also potentially invasive. In addition, the seeds were provided by a Monsanto-owned company. Third, a recent study showed high levels of glyphosate in Cheerios, higher than is allowed and that could be toxic, especially to kids who eat the cereal often. Previous studies have shown arsenic in Cheerios. It's clear Cheerios uses ingredients sourced from unsustainable agricultural methods -- methods that surely harm lot of bees, pollinators, and other wildlife.

Cheerios gave away 10x the seeds they were going to, and in very quick order -- only a few days. Folks jumped at the chance to do good, and while I'm all for corporations (even those that greenwash) to help lead the way, tacitly sponsoring a for-profit business with a dubious environmental background does raise some ethical concerns. Of course, we do live in a consumer-based, capitalist society where our leaders are brand names.

We desperately want to do good by the bees and the environment. And companies like General Mills will play on that goodwill as a marketing tactic -- which is just how the system works. But, because we want to do good, and because we're eager to support any movement that offers a simple solution and confirms our beliefs or desires, we hand over critical thinking to someone else. This is dangerous, especially in a time of climate change and mass extinction.

This all makes me think about butterfly bush, how so many believe planting it helps pollinators, when for many ecosystems it's a thug and / or supports only a limited number of adult pollinators. Or when we justifuy exotic plants like hosta, daffodil, or forsythia because we see a bee on them, then say well, these are helpful, too, without knowing what species are using the plant for forage or how the plant contributes to the ecosystem beyond its blooms. And don't get me started on using exotics to "extend the bloom time." What did pollinators do before we brought in exotics?

We must think more deeply. Doing so is not being a downer or poo-pooing a wildflower seed giveaway -- instead, it will lead to greater empowerment and action because we are not blindly following what makes us feel good in an impulse, but what makes us do good through research and critical thinking over time.
Posted by Benjamin Vogt at 10:08 AM 4 comments:

You've probably heard the term "native plant Nazi" used in one context or another. Over the last few years I've heard it used less and less, thankfully, but someone recently used it in a social media comment and, well, it really set off some triggers for me. Almost always the term is used in a passive aggressive / defensive context, particularly in a highly emotional thought. There's nothing wrong with being emotional, but I want to think critically about the terms and others like it that signal defensiveness or self protection.

A native plant proponent can often elicit doubt, confusion, and even a little bit of guilt and rage in gardeners and landscapers. Native plants imply that we're gardening not just for ourselves -- or even primarily for ourselves -- but that we are gardening for other humans and especially for other species. In a nation founded on personal freedom, liberty, and individual property rights, the idea of a garden as part of community -- or even as part of a larger shared ecosystem -- can be unnerving and complicating. Sometimes, a native plant proponent can come off as being passionately hardline, especially so if their language is earnest, decisive, and puncturing the status quo of both western civilization and the green / hort industry. That latter group thrives on developing new plants, as well as producing the exact same plants (through cuttings), in order to maintain consistency for salable goods. Native plants, especially the benefits of open-pollinated, local ecotype plants, doesn't just seem to subvert an industry, but may appear to attack it and the gardeners it serves.

But the perceived attack or threat is actually just critical thinking. How can we improve cultivating plants, growing plants, designing with plants so that we are helping wildlife and ecosystems revive and thrive? Such questions should be at the very heart and soul of why we garden, not an undermining impulse. Certainly, gardens our emotional places -- they are personal artworks, places of solace, places to deal with grief or find joy or recall loved ones or carefully step into a wild world we've alienated ourselves from. Gardens are psychologically complex. When new ideas of what a garden is or how it is are presented, it can feel very uncomfortable because it asks us to think in new ways, often deeper ways. Add in the realities of climate change and mass extinction, that our hand in the environment has severe repercussions for both good and ill, and suddenly gardens become less about simple joy and pleasure and more about social activism -- or more about an awareness of our complicity in something uncomfortable and terrible.

But for me, being conscious of the social (human and other species) nature of gardens is liberating and empowering. For as much as we destroy nature and erode living systems, we can work to reconnect and bind them together again. Our power is real. If we can recognize that our first, strongly emotional responses to deeper awareness are both natural and problematic -- if we can recognize emotion as not the end step but the beginning step -- maybe we'll stop labeling / dismissing ideas that challenge us. Maybe we'll realize the naturally defensive posture we take in order to protect our world view and sense of self is something we need to overcome in order to evolve as a compassionate species -- one stewarding the earth and learning about its rich complexities.

A "native plant nazi" is a term that conjures up a terribly evil period in our species's history. Using the "N" word is not only unfair but highly divisive and destructive -- it does the opposite of what it probably intends. No Gestapo will show up at your house and forcibly remove your hosta, butterfly bush, or daffodils from their beds. There will be no death camps for your daylily. There will be no laws enacted that demand genetic purity of local origin in your backyard. There will be no blitzkrieg, as long as the exotic plants don't escape cultivation and erode ecosystems beyond the garden fence. Native plants foster diversity and community while reviving the wildness of our ecoregions. In effect, native plants celebrate life, foster empathy and compassion, and ask us to think more deeply about how we influence the world around us as a species capable of being more than we've shown.
Posted by Benjamin Vogt at 11:25 AM 2 comments:

Are you ready for fall? Pre-order and get 20% off. Releases October 10! 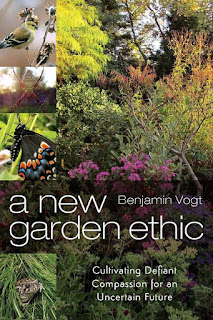