Did you know that Piet Oudolf and John Dixon Hunt are big baseball fans? In fact, Minnesota Twins fans? So are certain plants in my garden. I came home today, a day before the Twins open the season, and noticed two plants having a private pep rally.

Spring break is over. I actually got everything done on my checklist--which I never thought I would. Some prose chapbooks put together and sent out, a query for a memoir sent out, email requests, rec letter written for student, article on native plants written, jobs applied for, last 5 weeks of classes planned out (if that last book gets reprinted and delivered to students on time). I even got 50% of the garden cut down while it was 60 / 81 / 50 / 40. Now it's in the 30s and 20 degrees below normal.

Here are some flowers that were blooming last week before it got to 23 at night and snowed. I'd show you my latest haircut but I'm still having a Sampson sort of issue with it; you know, loss of inner and outer strength, self doubt, who am I without wavy 80s hair I let go too long.... 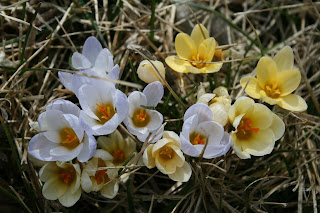 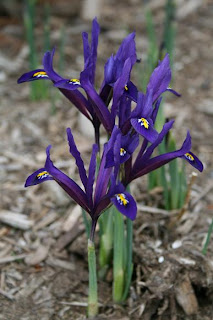 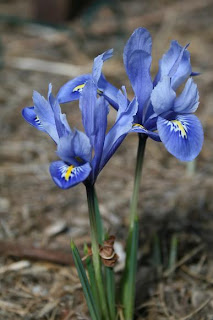 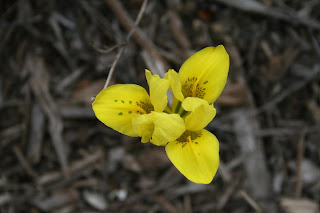 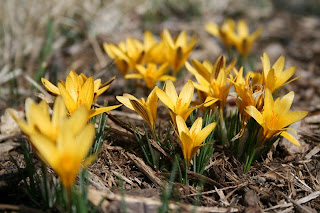 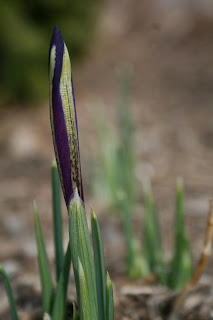 Sometimes the best blooms are before or after the bloom. This works in life too, like the expectation of a first kiss, good news, a warm cupcake, or the memory of them all that echoes forward into new befores that roll into afters and befores and that are all now now now now.﻿
Posted by Benjamin Vogt at 3:21 AM 11 comments: 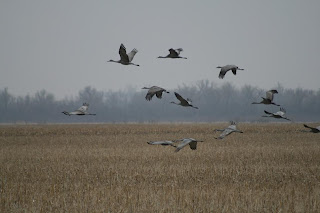 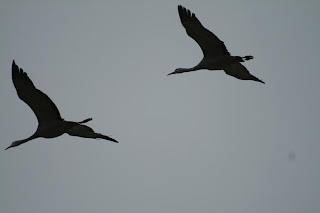 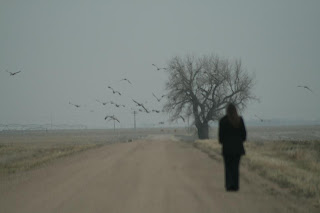 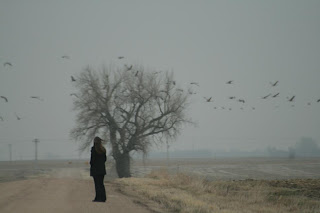 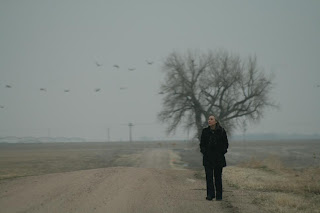 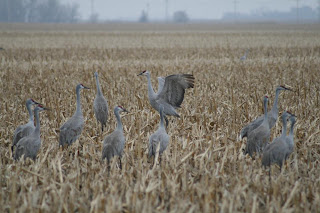 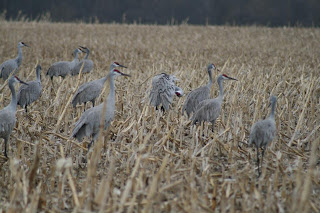 All day as we drove along back country roads, drivers in passing cars would wave to me, and it seemed odd. Did they know I was not from here? Is that just what you do? They always waved. You know, leaning back, one hand on the wheel, so two or three fingers is all I got. Still, in the "big city" you don't see that, we use one finger, but I got used to waving back--two or three fingers, one hand on the wheel, the other clutching my heavy SLR camera like an excited dog who wanted to leap out the window. From now on I'm going to wave to the 100 cars I pass on my way to work every morning.
Posted by Benjamin Vogt at 11:32 AM 27 comments:

Mr. Mows All the Time is Mowing Brown Grass

I can't believe it. Got home and he's mowing his lawn. Keep in mind, grass doesn't turn green or start growing for another month. Maybe dormant lawn is like ghost lawn, and it fades in and out of some other dimension or time continuum. Beam me up, Toro.

I just wish the amount of time he spent grooming his lawn, fertilizing it with chemicals, watering on a windy August afternoon, and blowing the clippings back on to the lawn (air pollution galore anyone?)... I just wish all that energy was put into planting a few more trees, in the very least. Heck, I'd help.

Maybe my neighbors have found my blog, maybe not, but hey, Mr. Mows All the Time, if you're reading this, come ring my doorbell. I'll go to the nursery with you, help you pick the right tree, and plant it. I'll even drive. And buy you a snow cone on the way home. Any flavor but grape.

A landscape without trees is a body without a soul. (Substitute "tree" with anything you like -- shrubs, coneflowers, bluebirds, poetry.)
Posted by Benjamin Vogt at 2:20 PM 18 comments:

I Am Afraid of Spring

This will be the fourth full year of the garden. In the second year anything that grew, or luckily bloomed, anything that did anything blew me away. But I've come to expect more. The surprises must be more, and in turn, the heartbreaks will certainly be more. And this is right.

In 2009 the sweet autumn clematis was huge, but for some reason last year it was small, as it was in 2008. What will it do this year? Will I have to start over?

Swamp milkweed seems to be a two year plant; will the plugs from last year be massive this summer? Will I have as many monarchs as I did last year, which was a banner year?

This is the first winter when I loved the winter garden almost as much as the summer. It's close. So many birds have taken refuge in the dried stalks, the now-full perennials. And all the color and texture--I will truly hate to cut it down in a week or two. I'll leave the grasses as long as I can because the birds might want bits of them. I'll also need to be especially careful about what I'm cutting--I already see swallowtail cocoons and preying mantis egg cases, rolled leaves of viceroys and spiders. What else must I carefully prserve that I can't see? Where do I step?

I garden in a living graveyard, where ghosts haunt me and each other. Decay is life, and life is decay. When I look at the arched stems of wild senna, I remember it being alive so cleary, all the days, all the insects, the close inspections, the wonder of developing seed pods--it's alive even now, my thoughts shooting outward like a projector on a screen to make it so. And the liatris. The eupatorium. The salvia. The aster laevis.

Crocus Till You Croak

They are special. Beautiful. Inspiring. And pretty dull when you get right down to it. Call it my hommage to blogging.

My first full-length poetry collection--flat spine!--will be coming out this fall from Stephen F. Austin State University Press. Here's the back cover copy, and a few images I hope will work in some way for the front cover:

From Oklahoma to Minnesota, Ohio to Nebraska, Benjamin Vogt traces his life through the echo of his ancestors, who settled the southern Plains in the 1800s. With poems based on black and white family photographs, past stories seep out from the worn edges: a boy standing where a tornado took the barn, a truck stalled on railroad tracks, a kiss before a lover ships off to war, a German chorus in the schoolhouse, a visit to a vanishing homestead. The past migration of Vogt’s family lingers in his own life as he moves from the southern to northern Plains and the eastern Midwest, where the natural world calls out through deep lakes and dark woods, and finally through transient moments framed by gardens: a butterfly nectaring on a coneflower, planting lavender with his future wife, or autumn leaves crashing against a morning window. In a rich array of forms and evocative imagery, the poems in Afterimage reach through prairie history until grass becomes skin, and light becomes shadow.

Email ThisBlogThis!Share to TwitterShare to FacebookShare to Pinterest
Labels: Poetry

A Nebraska Winter, According to Robert Vivian

Until you have buried yourself under the bushes of a Nebraska cold snap--with just a vast and cutting edge of the sky open and forever--you do not know what silence is: not the absence of sound alone (because here sound is still around you, though closer somehow to its sources), but a clear stripping away of any falseness or echo, or any movement that is beyond your life because you are beyond it, lying face-up in the snow where all eternity lives wide and separate in the sky. The wind blows over you because you are finally part of the earth--the part that cannot be spared from the ancient contradictions of wind and silence.

And if you liked that lyrical bit, there's far, far more in his wonderful collection of creative nonfiction essays Cold Snap as Yearning.
Posted by Benjamin Vogt at 2:22 AM 3 comments:

Ever been on the TGV in France? What year is it, anyway? Shoot, I still think it's October, and frankly, so does my garden. See.... 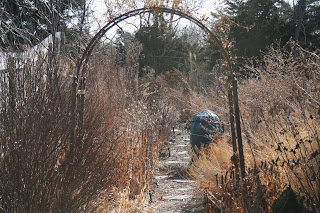 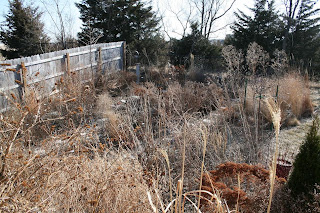 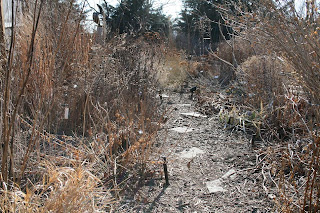 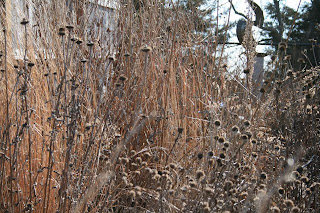 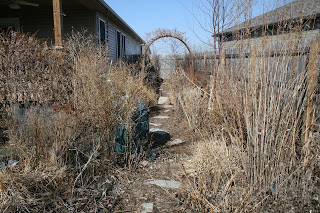 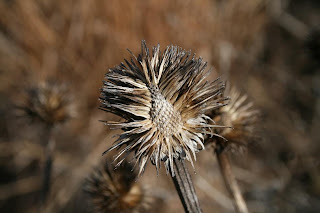 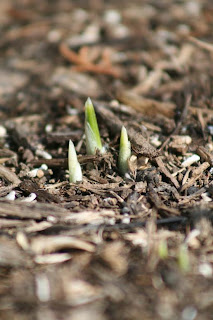 Only the iris reticulata seem to think it's not fall. I know what March means--an entire day turning the garden into a moonscape, which is what a herbaceous garden looks like after the big cut down. It's ugly. And I wonder how many insects are taking refuge in all that litter, so I begin to feel bad. Lazy. I still have winter things to do. I still have autumn things to do. From a few years ago.