Today we remember those who sacrificed their freedom so we could follow our dreams, and it's not just humans we should be talking about. Prairie dogs, bison, lesser prairie chickens, grassland songbirds, turtles, frogs, bees, black-footed ferrets, orchids, soil microbes, etc. If we want to talk humans, we should also include hundreds of Native American tribes. Happy Memorial Day to the last fledgling remnants of tallgrass prairie, and the lives sequestered in those holy places. 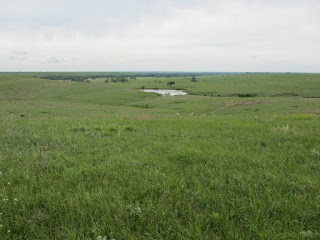 The Garden Needs Your Help

Two weeks ago I heard a calling from under the ceder trees. I swear, local cats must put hobo signs on our fence. There he was, a scrawny kitten about 4 months old, meowing his head off. Of course I befriended him. He'll sleep on my lap purring for as long as I can hold still (current record 45 minutes), follow me around to check on plants, and he loves chasing sticks and eating grass. I'm not sure he often leaves our garden as he's always there when I go out. He is extremely docile and not yet a hunter or fully adapted to outdoor life, so I'd like to find him a good home before he decimates birds or becomes feral.

Our older cats -- 13 and 16 -- can't embrace his energy (which isn't really all that much). And we already adopted a young stray in 2015. We'll pay for a vet checkup and half the neutering if you are ready to fall in love. And it won't take long to fall in love. Seeing him leave will be highly emotional, but if it's to a fantastic home it will sting less. Email if interested. 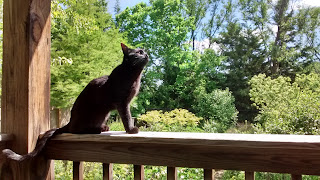 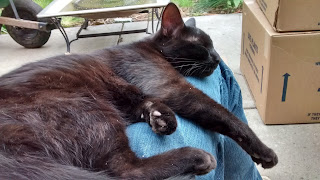 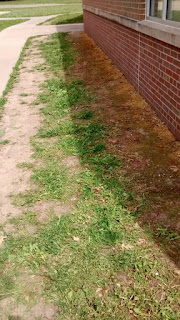 Hopefully, any future spraying can stay far, far away from the new pollinator garden. Even better, they simply won't spray anywhere since there are kids all over the place.
Posted by Benjamin Vogt at 8:22 AM No comments:

Every plant matters. In a time of climate change and mass extinction, when our culture is disconnected from wildness in our ecoregions, every plant holds the power to reconnect us -- to revive ourselves and the world around us. You can see this effect on a smooth or calico aster in early fall, when dozens and hundreds of pollinators cloud the blooms. You can see it on milkweed with bugs, beetles, and caterpillars using it as a host plant. You can see it on golden alexanders right now, their tiny yellow flowers enraptured by drifts of tiny bees.

This time of year folks are celebrating tulips and lilacs, plants which do little more than look pretty to one species. We also celebrate new cultivars of native plants at garden centers without knowing how they compare in ecosystem services with straight species. The beauty of the world is not enough, how it is now is not good enough. We have to have our hands in everything, and that's how I see making new varieties of plants. It is not honoring or celebrating the joy of the natural world, but instead is a continuous alienation of ourselves from it as we profess ourselves superior. Certainly, the act of garden making will always hold some degree of superiority, yet we can humble ourselves in meaningful reconciliation, and in that way find a purpose and connection as profound as sitting still in a prairie or woodland.

The world knows better than us. This realization does not make us small but makes us larger. As we give up our finite wisdom for the larger wisdom of connected species and ecosystems we grow, instead of contracting further and further into our own little worlds. Our culture becomes the culture of others when we garden for life and equality across species. This is the efficacy of native plants, and especially straight species co-evolved with wildlife. We accept, embrace, and honor the purposeful beauty we already deeply connect with -- our biophilia. We don't need to alter a plant's bloom shape or color to feel joy. And in order to provide joy for other species we need to stop altering plants for our aesthetic passion. When you walk into a prairie do you think, "This is gorgeous, I am so moved, look at the birds and the butterflies -- and yet it could be so much better if we moved these plants here, or if that flower was a different color or just a bit bigger."

The world is already perfectly ordered, and all we have to do is let go of our ego to have a more meaningful, inspired, and liberated life. Wisdom, health, and compassion are all around us in bees working the blooms their ancestors have known for thousands of years, and flowers timed for the emergence of insects.
Posted by Benjamin Vogt at 8:42 AM 1 comment:

A few shots of how things are looking. I still prefer autumn and winter -- spring is so blah. And everyone is mowing, blowing, and mowing again.

Living Without Hope is Freedom

In my forthcoming book I discuss how having hope is not as empowering as we might think, particularly on issues of climate change and social justice for all species. I quote a little Derrick Jensen in that book, but I'm quoting more below. I think it's important to understand that living without hope is not hopelessness; that the condition of not having hope is liberating, not stifling or depressing. Once we are free of depending upon systems of oppression, profit, and exploitation, we become free and powerful. In making sustainable gardens that favor diversity and honor natural processes, while providing life for other species, we eschew hope and instead embrace action. Tell me what you think of Jensen's thoughts.

"A wonderful thing happens when you give up on hope, which is that you realize you never needed it in the first place. You realize that giving up on hope didn’t kill you, nor did it make you less effective. In fact it made you more effective, because you ceased relying on someone or something else to solve your problems—you ceased hoping your problems somehow get solved, through the magical assistance of God, the Great Mother, the Sierra Club, valiant tree-sitters, brave salmon, or even the Earth itself—and you just began doing what’s necessary to solve your problems yourself.

Because of industrial civilization, human sperm counts have been cut in half over the last fifty years. At the same time, girls have begun to enter puberty earlier: 1 percent of three-year-old girls have begun to develop breasts or pubic hair, and in only the last six years, the percentage of girls under eight with swollen breasts or pubic hair has gone from 1 percent to 6.7 percent for white girls, and 27.2 percent for black girls. What are you going to do about this? Are you going to hope this problem somehow goes away? Will you hope someone magically solves it? Will you hope someone—anyone—will stop the chemical industry from killing us all? Or will you do something about it?

When you give up on hope, you lose a lot of fear. And when you quit relying on hope, and instead begin to just protect those you love, you become dangerous indeed to those in power. In case you’re wondering, that’s a very good thing."
Posted by Benjamin Vogt at 8:18 AM 3 comments: