This is my vision for the 21st century garden -- a space that embraces both the aesthetic /artistic expression of the creator / owner, and that pays attention to the local ecology by creating as much of a native wildlife habitat as possible.

I do not see ecology and garden design as mutually exclusive or in any way opposed to one another. Yes, this means gardening may tax our brains a bit more, and nurseries and architects and landscapers will have to educate more. But you know what? I'm seeing a true hunger for that education in every talk I give, in every consult I do.

Sure, using native plants is not a silver bullet, so please don't you dare tag me with a "purist" label; gardens can never be true representations of local, native ecology because they are artifice and are too small-scale to do much on their own. But our landscapes do link up and create park corridors -- it's the whole idea behind lawns in suburbia. What if those lawns were forests, shurblands, or prairies? Yes, they might never be able to function indepentently like "wild" ecosystems, but they'd still provide for a far greater diversity of wildlife and mitigate our pollution, runnoff, help on electric bills, etc. I see a wildlife corridor just in the thin tree line that goes along my back property. 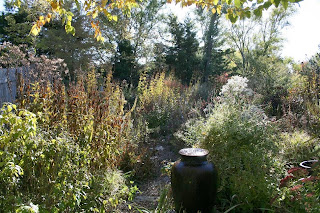 When I hear someone say we should just let gardeners be, let folks do whatever they want, I feel pretty aggravated. The status quo is what's gotten us into the whole mess of climate change and ecosystem fragmentation, dirty air, dirty water, asthma, and perhaps ADHD and a host of other environmentally-induced illnesses.

Let's hook gardeners on native plants that amend the life in the soil and in the air. It's easy. Everyone wants to see more butterflies and birds. So let's go with viburnum, serviceberry, milkweed, liatris, ironweed, etc. Plant a few of those in a landscape and suddenly the human residents notice something special, start thinking, start connecting the dots, start reading and learning, and then do more. They become wildlife refuge managers without even knowing it. Bam. Citizen scientists. Cool people. Stewards. Important activists.

You can't plant whatever you want anymore. I'm not saying we need a plant police, but you also can't just dump used paint or fluorescent lights out back either, can you? Let people be? Foster the ignorance is bliss theory? Nah. Not for me. We can use native plants in any landscape design, but it does require more upfront thinking and planning; you can't just call 1-800-landscaper and have them plop in the standard fare of spiraea, barberry, miscanthus, and some doomed annuals. Waste of money. No benefit to wildlife or local ecology. 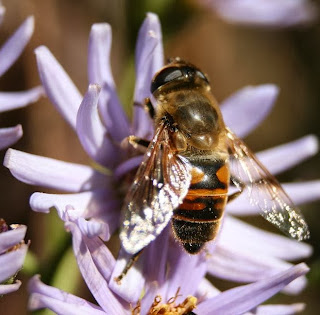 The fact that we are killing off 6,000 species a year and spilling oil all over the place is a sad, depressing fact. But the bigger fact is we don't have to -- we know the better alternatives, and not pursuing them is a clear moral / ethical imperative we are failing with gusto. If you are depressed by the reality of what we do to the planet, then sticking your head in the sand and hoping for the best -- or pleading to just let gardeners do whatever makes them happy -- won't fix a thing. What will fix a thing and bring you true joy is planting native plants, getting to know your local ecosystems and species, and setting an example in your neighborhood by ripping out lawn maintained by gasoline, fertilizer, and clean water. Every gardener has immense power -- and the joy produced by the larger amount of wildlife your native plants attract will far outstrip the pretend, plastic joy of just doing whatever you want (like planting nonnative crap from big box stores).

Two great pieces this week that speak more specifically about the above aspects can be found via Chris Helzer (The Conservation Value of Backyard Prairies) and Thomas Rainer (Mingle or Clump).

This fall I've become particularly enamored with one path, one portion in my small garden. I think it may be two asters that I self sowed themselves -- I just don't remember planting them. They are growing into blue sentinels across from each other on this one path, covered in insects, glowing in four dimensions. This is what I like about a garden that's now wilding -- I can be surprised year to year and take deep pleasure in the angles of light, the new reflections of life, the shifting form and function of even one small area. 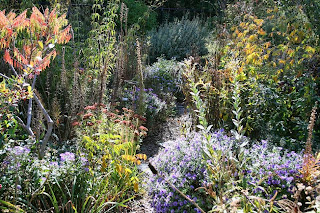 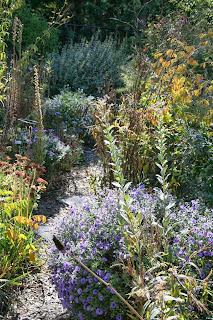 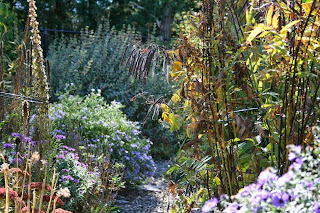 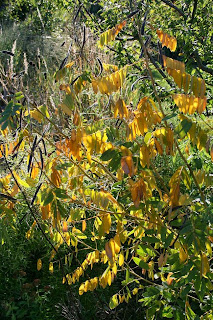 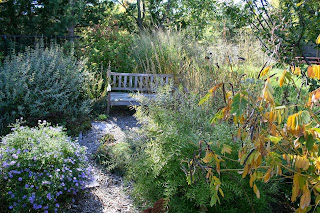 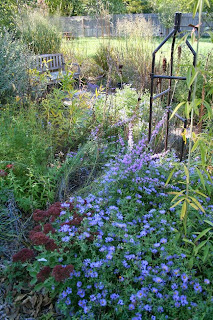 I'm not the only "crazy" one linking morality and ethics to nature and landscapes (I've known this for some time, though). I just finished Rambunctious Garden by Emma Marris, and while I spent most of the book pissed off both by some things she was saying and how she was saying them, by the time I got toward the end I realized we had similar goals. It doesn't hurt that she uses Aldo Leopold to get her point across more than once.

"In the late 1940s conservation icon Aldo Leopold called the recognition of the inherent value of an ecosystem a land ethic. The land ethic extends to 'soils, waters, plants and animals' the same moral obligations we currently have to members of our human communities.... In modern terms, the land ethic espouses a biocentric view of life, which gives other species and ecosystems moral status."

She goes on to discuss deep ecology and philosopher Arne Naess. Shallow ecology is looking after the earth as an extension of looking after the self. But in deep ecology all living things have value simply because they are. Humans are not especially priveleged but are nodes in a complex web. Taking care of ourselves means taking care of the environment. Deep ecology sounds a lot like taking care of those you love, and those you don't know who are less fortunate, except we now extend this to other lives beyond our own species. I'm not sure why this is so hard to grasp or practice.

Leopold and deep ecology are things I've studied, but so long ago I let them slip away. Suddenly, in a few lines, Marris shows me that these writings had a profound effect on how I view the world and define my work.

"Rich westerners, especially, must quit tapping into nature at such a furious pace to satisfy the frivolous desires of their consumer society. Human beings must reduce their population so that we can live more lightly on the Earth. These are all moral obligations to the natural world, not mere choices."

"We are used to the idea that individual lives are fundamentally valuable; it is the basis of the sense that murder is wrong. It is harder to set values for morphous collectons like 'ecosystems' or 'the land' or for nonliving entities like 'the soil' or a stream. Some ethicists, however, certainly hold that these entities have their own intrinsic value. Some even propose that the entire Earth itself holds value as a single human does...."

She goes on to say losing native plants and ecosystems is like losing a language, a culture. Yup. Hell yup.

The last few days I've been dividing and planting out milkweed seedlings that I winter sowed last year; they've grown into healthy young plants this whole summer. I was able to get about a half dozen common milkweed, and maybe a dozen swamp milkweed.

Every day I read an article about the 80% drop in numbers of last winter's monarch population in Mexico, and then a 90% drop in the North America summer population this year. You've got logging in Mexico, spraying glyphosate in agricultural fields of the Plains and Midwest, roads and cities, less wild flowers to nectar on, less milkweed to lay eggs on. This is a species potentially on the brink in most of the U.S. and Canada, but it's one of many thousands more we don't see as commonly, that isn't as big and bright or as enchanting for most folks to watch as it flits through the air.

We are a nation of 40 million gardeners -- we have immense power to do the right thing, and there is a right thing to be done. Plant milkweed. Not one. Not two. But a dozen right out your door. Rip up more lawn and put in a native flower bed rich with nectar. Toss in more milkweed there. We are directly causing climate change, we are directly eroding habitat through ag subsidies and suburban sprawl and mining and tar sands and marsh draining. Those are huge, sprawling issues we can't tackle alone -- but with collective small acts we can erode the physical and psychological damage. Every milkweed planted is a blow against our worst selves.

We are eradicating a species' home -- it's not the monarch's, it's ours. And the root of the entire issue is that we see ourselves disconnected from life. We are self centered, whether as a product of our evolution or our culture or both. It's not a completely bad thing to be self serving and aware. A lot of you reading this blog garden -- you know what happens when you sit in the garden and watch a bee or butterfly or bird for 10, 20, 30 minutes. You know we aren't disconnected. Maybe that's transcendence, maybe it's pure love, maybe it's just being human and embracing wonder on a 1 to 1 level.

Someday I'll have the garden of my dreams, but for now I'll have to live with this. I can manage. 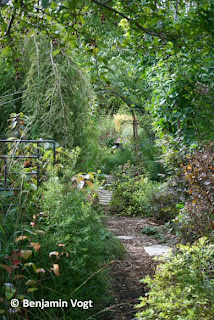 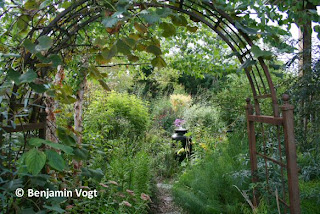 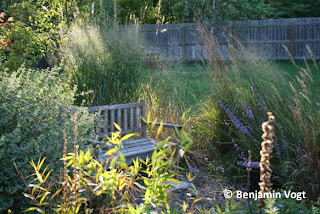 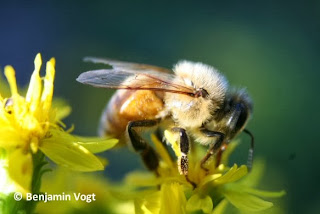 27 lunch bags and counting. I figure I'll make it to 40. The plan is to winter sow as many species as I can (in pots and beds), and then, perhaps, use most of the seed to start a nursery business on an acreage next year. Maybe. For now, the kitchen table is serving prairie. 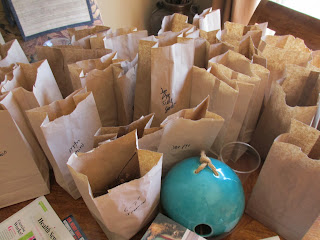