This Grass, This Clover

Out back this morning trying to pull ripe black medic seeds before they scatter. I'm so thankful I can be on my hands and knees. As I crawl around the back lawn / soon-to-be meadow, the soft young shoots of sideoats grama and little bluestem tickle my knuckles. The slower I go the more I see: young smooth aster and rudbeckia nestled low against the ground; airy seedlings of purple prairie clover camouflaged in the green fescue; ants mysteriously placing soil up the stems and leaves of a few weeds. I don't know what will become of me in the next hour or the next decade. I don't know what injustice, what agony, what ecstasy I may encounter. I hope with all my heart that whatever I become is part of this grass, this clover. 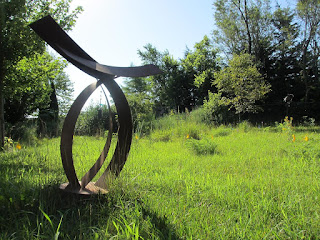 Posted by Benjamin Vogt at 10:24 AM No comments:

I turned 40 last week. My garden turned 9. Together we are either -31 or 409. Here's my annual look at the birthday landscape, though with less fanfare than usual. Because I'm old now.

Native Plants Are a Threat

Which includes both the scientific and philosophical conversation that ensues. Native plants are a threat to an entire industry built foremost on ornamentation for human visual consumption. Native plants represent a gardening that, instead of focusing solely or primarily on the commercialization of our five senses, instead explores the deeper issues of why we garden, how we garden, and who we garden for. These issues are nothing new; instead, the issues are poking holes in generations of  embedded acceptance that nature is for us, and that how we re-arrange nature is by default noble, good, and environmentally benign.

Every year new hybrids of plants come out, as do new "discoveries" made halfway across the world. These plants are pushed and promoted as products to consume, like new iphones, which to me feels incredibly disrespectful to the nature communities we hope to positively impact. Not only do so many "new" plants come to us relatively unproven in home and urban landscapes, they may not even support the wildlife community we assume and are pitched will benefit.

It's not even just the plants themselves, though that's the primary issue in my mind -- it's how we use them; the wrong plants in the wrong places with the wrong companions in the wrong layers (aka no layers). We drive around town and see the mulched void of planting beds, the same overused ornamental and exotic plants, and assume this is good design; then we hire landscapers to replicate this at home. It's too bad.

But back to native plants being a threat. The way I see them -- through scientific evidence as well as an ethical leaning that says we do not know better than nature and evolution -- is absolutely a threat to entire tributaries of of the horticulture industry. But you know what? It's also an opportunity. While we've created a human-centered system based on visual appeal and commerce, we can go beyond greenwashing plant tags or calling hybrids native plants. We can say native plants aren't just for us, that in fact they are for everything but us, and in that act revolutionize why we garden, how we garden, and who we garden for. Suddenly, something radical (getting down to the root) happens -- as we stop thinking about gardens as primarily for us, at least as a 50/50 proposition, this selflessness begins to spread into other areas of our lives... those in permaculture know this, as do the countless vendors in local farmer's markets.

Native plants are a threat to ourselves and our assumptions which make us feel safe in a world we perceive as chaotic and out to get us; but it's only the human systems we've imposed on the world that make life feel chaotic and dangerous, precisely because so many human systems are at odds with nature. There's only one assumption we can rely on -- that the world knows better than us, does not need us in it, and in these realizations we can become freer and more at home than we've ever been as we rethink beauty in a time of mass extinction.
Posted by Benjamin Vogt at 10:49 AM 4 comments:

I designed a very long space (nearly 150') for a client last spring, who then purchased all of the plants and over several weeks installed hundreds upon hundreds of 3" pots. I am amazed at how fast the garden has filled out in just a year with no supplemental watering or fertilizer -- luck, I guess! 100% native plants. 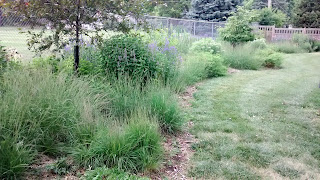 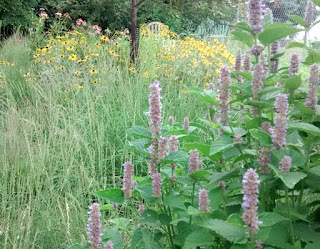 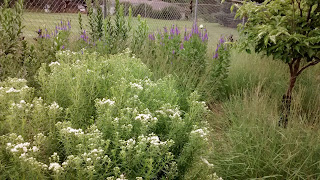 And somehow we ended up at the Sarpy County fairgrounds to stubble upon this Nebraska Statewide Arboretum bed, very narrow and in an unforgiving location, awash in blooms: 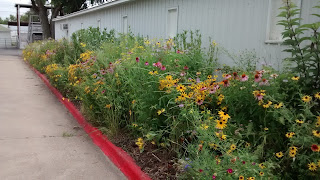 Oddly, the red fire zone paint on the curb ties in nicely with the Gallardia and coneflowers, don't you think? :)

Posted by Benjamin Vogt at 10:03 AM No comments: