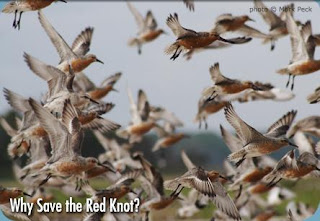 I stayed up late last night getting hooked by a Nature episode on PBS about this small migratory bird and sea creature. At the end I was nearly in tears, as the woman on the tv was (I admit I got pulled in to the rhetoric, but that's the point, yes? This stuff BETTER hit us in the gut).
--Red knots migrate almost 10,000 miles from South America (winter) to northeast Canada and the lower arctic circle (spring nesting).
--They fly in large groups, almost all at once, and stop at key staging areas to bulk up for flying and nesting. This makes them more vulnerable to environmental changes.
--Like many a migratory bird, they precisely time their flights up north. When the babies hatch, so too have the bugs, their main food supply. It's almost on the same day. Neat.
--But anyway, a key bulking up / staging area is in the Delaware Bay, where they feed on horshoe crab eggs in the sand. Problem is, fisherman use those crabs as bait, and specifically the female. Turns out fish LOVE those horseshoe crab eggs.
--Well, see, female crabs don't mature for ten years. So although we can protect habitat to some degree for red knots, it may be too late because a key food supply is gone for a decade.
--The population of birds has dropped from 100,000 to less than 15,000 in 20 years. My god, TWENTY years.
They interviewed a fisherman who was upset that the government told him he can't gather crabs for bait. Well, I first felt angry at him, then realized it's not his fault. Economics drive him. Capitalism drives him. Our general non chalance so engrained in our secular and religious ethical impulses drive him. What to do. Who cares.
The end of the episode pulled all the right strings at the right time. You see volunteers tagging birds, counting birds, counting crabs, then going up to the arctic to anticipate their arrival after seeing them in Delaware a few days before. Red knot pairs nest about 3/4 of a mile apart, so the people fanned out over the usual nesting areas.
NOTHING. Not one bird. Turns out, an estimated 90% never made it north.
How in god's name can 90% not make it? What are we doing? Who cares? If you're still reading you know why it matters. It's not about hugging trees--or birds--it's about redemption, about seeing ourselves as part of the world, physically and spiritually. So what if a crab and a bird die out? (That crab has been around for 350 million years, fyi.) One species becomes another, and another. Each species tears out a part of human compassion and understanding. As the animals go, humans go. Our neglect of the earth is synonymous with our neglect of ourselves.
I think about the necessity for crop diversity, of tree diversity in forests. Nature takes care of itself, but when we step in and "cultivate" it, the land dies. Look at the Amazon. Look at our suburban green space. Without diversity everything falls apart, and there's certainly no backup. If the ash all go in an ash forest, you've got no forest. If ash go among oaks, maples, and pine, it's easier to take. I can't help but think how deeply rooted, how symbiotic, our history of war and slavery and sexism is to that of environmental collapse. Well, it's actually pretty obvious.
And the scary thing is, religion--Christianity--is a large cause of so many things, and mainly because it's been misinterpreted through the millenia, misapplied as an ethical, moral, and spiritual directive to humans. And such a core belief system, if it's to be lived correctly in this new environmental light, must change overnight, be absorbed overnight. We don't have generations to save the earth, just as the red knot doesn't have a decade to come back. But, this larger topic of religion is a weekend post.
http://www.pbs.org/wnet/nature/crash/conservation.html

Posted by Benjamin Vogt at 1:44 PM

I wish I had seen the special - I have a gorgeous watercolor of a red knot, done by a Virginia artist about 20 years ago, that is my favorite - and I have always loved this birds. I've read a bit about losses in numbers regarding this species - but I had not idea, and like you, couldn't help but say...90%???? How the hell can 90% of something be lost? There is a fundamental lack of understanding - global - about one of the most fundamental truism in ecology: the more diverse a system is, the more stable it is. It baffles me that the loss of any species doesn't just bring populations (human populations!) to their knees.

Kim over A Study in Contrast mentioned your site to me - I am glad that I stopped by.

Pam--They are striking birds (but my heart will always be at home with canadian geese, though they certainly aren't threatened). I know what you mean about falling to our knees--if only we could be so humble! Still, you've got to have hope. That's why we garden, in part, right?

I'm taping the show this weekend for my growing collection of videos that I'd like to teach one day in an environmental lit class. I'm sure it'll be on by you again this weekend, too, since it just premiered this week.