Be a Monk, Live in the Plains 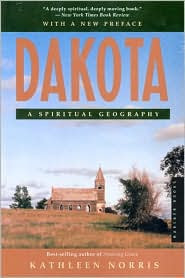 Not a great title. I've been looking over notes on a book by Kathleen Norris entitled Dakota: A Spiritual Geography (apparently the Dakotas are perfect places to be spiritual, and especially ascetic: quiet, devoid of stuff, barren, unfarmable....). It's also about putting down roots, learning and living a place, being connected to it and to the history of the ground and the people who've lived there. She focuses on the values of Benedictine monks and Native Americans, as well as European immigrants. Often, she compares the former two to the vanishing rural towns, farms, and way of life of the latter--I think it's all synonymous with how we live today, ipod nano-ed up, genetically modified food, empty empty willing to be emptied existence because it's easier. I like my ipod, but I also like my garden sans ipod. Anywho, continuing in posts about spirituality and religion and place, I give your Norris with some Linda Hogan:


I suspect that when modern Americans ask “what is sacred?” they are really asking “what place is mine? what community do I belong to?” I think this explains in part the appeal of Native American religions, and also the appearance of guidebooks to monastic retreat houses. We are seeking the tribal, anything with strong communal values and traditions. But all too often we’re trying to do it on our own, as individuals. That IS the tradition of middle-class America; a belief in individual accomplishment so strong that it favors exploitation over stewardship, mobility over stability. That we pay a high price for applying upward mobility to the life of the spirit, denying roots, and turning a blind eye to that which might nurture us in our own heritage has been evident to at least one Native American writer. Linda Hogan speaks eloquently of her discovery:

“that many of my non-Indian students are desperately searching for spirits, for their own souls, that something in the contemporary world has left many Euro-Americans and Europeans without a source, has left them with a longing for something they believe existed in earlier times or in tribal people. What they want is their own life, their own love for the earth, but when they speak their own words about it, they don’t believe them, so they look to Indians, forgetting that enlightenment can’t be found in a weekend workshop, forgetting that most Indian people are living the crisis of American life, the toxins of chemical waste, the pain of what is repressed in white Americans. There is not such a thing as becoming an instant shaman, an instant healer, an instantly spiritualized person.”

Traditional religions take for granted the truth of Hogan’s last statement, but Americans seek the quick fix for spiritual as well as physical pain. That conversion is a lifelong process is the last thing we want to hear. That it may reach back into the generations before us, that the wisdom of what I might term a cloud of witnesses or Linda Hogan calls watchers, to describe visitors from the Indian spirit world, might still be raging in our blood, having plenty to say, is even more threatening.

Like Linda Hogan, I find a great spiritual hunger among many people who are uncomfortable with talk of God, let alone the idea of church. Many of them are rightfully rejecting the distorted images of Christianity that they absorbed in childhood at the hands of too often ignorant catechism and Sunday school instructors. It’s a past most of us would like to forget. But simply denying it won’t work; and inventing Indian ancestors only clouds the real issue, which is fear.
Posted by Benjamin Vogt at 5:02 PM

you are a philosopher as well as a gardener? i think irises in your low spot would work great. there is a yellow flag i think? that loves it wet and is stunning when in bloom. takes over though. rivers are nice to contemplate.

And blue flag too, right Tina? I don't mind if they take over--not yet anyway! I'm not a philosopher by profession; I'm a writer--a poet and essayist, and I teach English at the Univeristy of Nebraska while working on my PhD. I due tend to wax poetic and sometimes say a line or two that are modersately intelligent, usually to my plants.

I enjoyed this thought-provoking post, Benjamin, and even though I'm not really smart enough to add anything of real value, I wanted you to know that. Thanks! -Jen :)

Jen--Don't sell yourself short! But thanks for letting me know you got something from the post--I always hope I'm not the only one.

Wise words, Benjamin ... I like the way you frame the real issue - fear. It is not something that's easy to face. Real change is tough for people.

The Dakotas though? I live directly north of North Dakota. Farming is prevalent there.

Kate--Just as long as you realize most of those wrods were not mine! I wouldn't want to live in the Dakotas--not with that flat coldness, but the solitude must be divine. As for my CFL post, I din't know there still was a CFL, ey. Good for you guys! :)

Very interesting. I would want to talk with her and see what she thinks about me. I am not uncomfortable with talk of god or church, and nor do I hunger for it. Maybe nature is my church, and I do not feel uneasy about my "place" in life because I dig in the dirt and cultivate my own area? Or maybe I am simply in denial somehow, just not in the typical American way of having to get the latest this and the newest that?

Interesting to think about... but just not something that keeps me up at night. I wonder why?

Nature is my church, Kim. I find more community, more God, in that place. If you can find my Wendell Berry post from a few weeks ago, you'll likely feel some kinship there. Only thing that keeps me up at night these days in the last frost date, and when the school year will be over--and thus when I can pray again (i.e. garden). Benedictine monks believe work is prayer giving glory to god, so gardening must be a really good thing. But they're on to more than my glibness.

I read her other two books also: The Cloister Walk and the Quotidian Mysteries. She's a good essayist, but then, so are you. I found your blog through my Tidewater friend, Les.~~Dee