Building 1/8 of a Yatsuhashi Bridge (Or, Ode to Dad)

It was either spend $150 on a rain barrel that'd probably fill up in one of our deluges, or, more economically (and with some style points), build a dry stream for the gutter on the east side of the house with a small scale bridge (the garden ain't that big anyway, so it's about proportion--hear that mulch volcano and white rock everywhere dip-wad neighbors?).

Yatsuhashi is a Japanese bridge, uh, system. It's composed of eight spans over a pond or stream or marsh or clump of dead bodies. The point is to make each span go off in a suddenly new direction, thus forcing the gardenee to stop, pause, and reflect more about their surroundings (or fall off and die). In addition, the Japanese believe evil spirits walk only in straight lines, so, this will help you lose them in the tranquility of the natural space. A bridge, in general, is also a symbol of moving from one world to another. Makes sense.

A yatsuhashi is very simple, too--some are simply planks thrown across each other like fallen dominos. Most look sorta like my mini 1/8 version, below, which, yes, doesn't make you walk in a new direction, but it LOOKS like a yatsuhashi, sorta. Plus, we got about 3/4" of rain this morning, and the stream worked.

Yatsuhashi is also a Japanese dessert of some sort. My bridge does not look like the dessert. 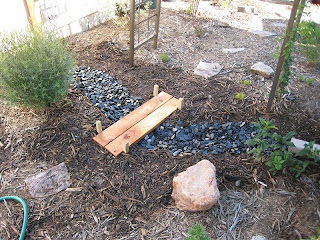 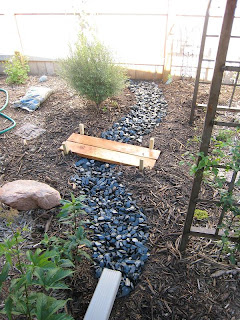 So, for father's day, a brief tribute to the man who helped me, sort of, overcome my fear of saws, nails, hammers, construction sites....

My dad was a home builder once upon a time, helped his dad do the same growing up, moved to MN and started his own business and built some kick ass houses. We kids always got to go along, at $5 an hour--a bribe so he had company, because the work itself was difficult at 13: we picked up buried lumber scraps and disintegrating cardboard in muddy yards, scraped floors smooth after the walls were taped and sanded, put paper on wood floors to protect them, spread hay on dirt basement floors in January to keep them thawed out (and get a nose full of nasty grime with frost bit fingers), cleaned finished houses top to bottom, et cetera. I also hated all the noise when the crews were there, especially framers with their nail guns and air compressors, cords to trip on, chasms to fall in to.... Good times. And in a way, they really were.

Anyway, I used to NOT be able to hit a nail worth a darn. Certainly not on the head, MOST CERTAINLY not straight. And saws. I once used a table saw to help my dad build stairs from our house down to the lake--all I had to do was cut about 5 billion spindles for the railing at the same length. Still, scared the crap out of me. And using the Skil saw--whoa. Not pretty.

So, I went to HD, bought wood and nails, measured and sawed said wood, hammered said nails beautifully true, and made me a little said craft project (ain't a house, or set of stairs). Said.

I felt like a man, briefly, not an emotional whiney grad student artist writer temperamental prissy plaid-wearing suede jacket touting English teacher flake. I tore chest hair from my flesh. I ate it. I sniffed my sweat and became engorged with my man spirit. I beat drums and chanted strange, deep, gutteral sounds late in to the night competing with the neighbor's peacock. Or, I took a shower because I smelled like Arby's.

My mom got me to overcome my aversion to dirt--and celebrate dirt--my dad my aversion to real work; but neither have taught me to avert praising myself for tiny things over many paragraphs. Who else will, though?
Posted by Benjamin Vogt at 11:47 AM

Ha! Well, I'M impressed. I always am, when anyone can do anything by way of a how-to project. Always seems like a brave venture into the unknown to me. So congrats on yoru mini-dry stream and bridge! And on having a dad who could (and did) teach you practical skills. God knows, we could all use 'em!

When I finish projects like that, I always look back and find myself asking myself - did I do that? I then get a smug, self satisfied look on my face that I like to wear for a few days.

OFB--You're easily impressed then....:)
Les--But only for a few days, right? Then another project comes along and you're beating your head into the wall or something. Ahh.

I hope nobody ever gets you to avert that... that would keep us from the certain amusement of reading about it. :)

Sounds to me as if you actually spent the weekend at a male consciousness-raising fest with Robert Bly. Same results, it seems--save that you have a bridge!
--Kate

Kate--Robert Bly. Huh. Last semester I was teaching a survey course of poetry since 1950, and one of my students, when we got to Bly's poems, yelled out something like "Yuck, I hate this drum beating sweat lodge give manly man freak." But, he does write some good poetry, and his work with image needs to be much more studied by my writing students who see know need, at all, for using imagery.