Of Many Cardinals and Much Snow

Our last snow was 1" two months ago, but the last three days saw around 10" of snow (drifts of 3' as seen below), and dozens upon dozens of Hitchcock-numbering birds. The birds apparently enjoy using the snowfall and cloud cover to mask their movements from predators. I guess. Don't really know. I want Irish coffee. Anyone else? Shoveling off the driveway was terrible, but I'm so thankful I had wife-ish help. -15 windchill felt more like -10. 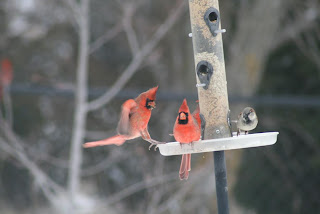 That's a mouthful he's trying to leave with. Preposition and all. 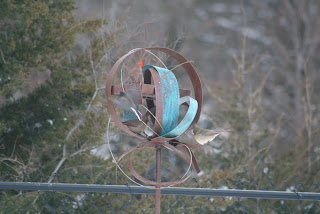 Soooo happy with this cool feeder made by an artist. The birds climb all over it. As do the #%$&! squirrels. 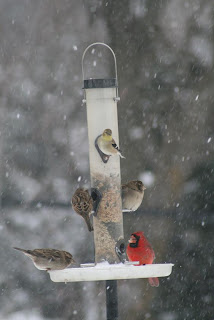 Only a sampling of the many bird species at the two feeders. 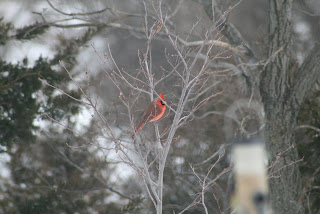 I love how the bud tips of this serviceberry are highlighted by the cardinal's plummage. Really cool. Click to expand image. 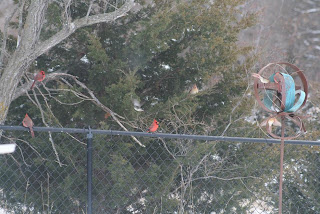 How many cards do you see? Later on in the afternoon I counted 9, so one was hiding since I always see them in mating pairs. Free copy of my poetry chapbook if you get the right number. Not really. The front sidewalk has a preliminary 2 foot drift, and then the monster behind is 3 feet or more, covering most of the 'Arctic Fire' dogwoods I've been longing to see against the snow (not in the snow!). 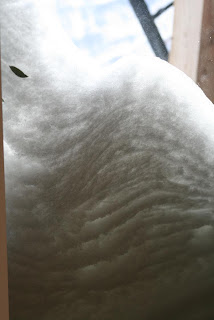 Look at the cool stratification of snow, and the green butterfly bush leaf caught against the glass. 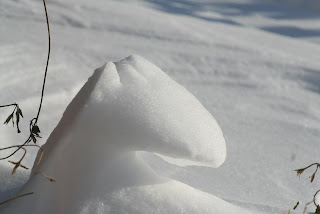 What is this a head of? Shrunken monkey? Puppy? My neighbor's yippy puppy, frozen with liquid nitrogen? 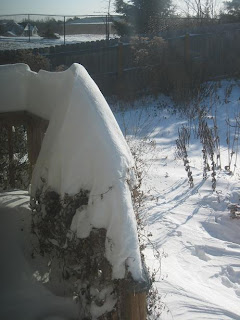 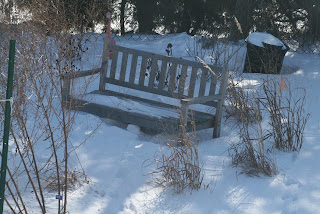 I think the rabbit is now sleeping under here, as its 'October Skies' aster is completely covered. 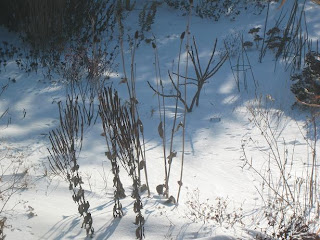 See that plant label out there by the sumac? It was over a foot off the ground two days ago. 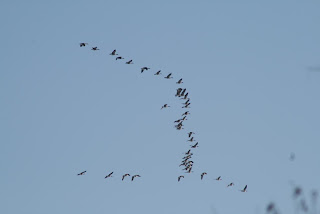 And then some geese came. Perfect.
Posted by Benjamin Vogt at 3:48 PM

Great Cardinal shots... I love the first one just landing. Looks like you got a ton of snow too. Carol

Well, the snow might be worth it for some Irish coffee. Of course, i suppose you could have it without the snow, too.

I think the perfect photos of cardinals have snow in the background. Your pictures are just perfect! I am also impressed with your interesting snow photos.

Your cold and winter storm has made the TV news over here.

Carol--I had some other neat in-flight shots, but not centered like this one. I took way too many pics to post here.
OFB--The feeder was made by Joe Papendick, go check him out!
Susan--Oh, you certainly could have it without the snow, but where would you get the water for the coffee?
AZP--Thank you kindly. I've never seen so many cards at once. Do they flock?
Rob--It was a storm that took up half the country at one point, I heard. Yeah, well, your climate conference further north is making news, but the public doesn't care. And my plant list on the sidebar is WAY out of date, but glad you liked it! I wish I had time to update it with what I got this summer.

Okay, you win. That's a lot of snow. It's awfully pretty and makes the Cardinals really stand out. I'm digging your new metal birdfeeder, it doubles well as garden sculpture. I have completely given up on birdfeeders because of the squirrels. My neighbors have a feeder, so the only ones at mine were the bushy-tailed rats. They don't just steal the feed, they try to make off with the whole feeder.

MMD--Our theory was that if we put one feeder by the fence and the trees, the squirrels might stay there. No. Instead, we have 3-4 squirells at once whereas we used to have 1-2. I often go out and see tails on both feeders. (When will someone invent an auto fill feeder so I don't ahve to go out in -10 weather?)

What great pictures of the cardinals! There's nothing better than stepping out after a snow storm. Beautiful. Makes you not want to disturb anything. :)

Liisa--Nothing better than stepping out after a snow storm if it's not a -20 wind chill. Which is what we had.
Victoria--They make up fo my lack of red berries on shrubs... should've planted more chokeberries.

Well, I had red berries on the hollies and they were so pretty, but the robins are very smart about this weather deal, so they blew through just before the storm and stripped them... all gone. Nothing red out there in the snow now except the cardinals, and there is nothing prettier. I enjoyed your lovely photos. Yes, I can see the red tips of your shrub. Very(!) nice photo, that one.