To Structure a Memoir

I'm thinking that, as I write the next book, I'll try to do updates along the way about the process. Not many, since I'll be busy teaching again, but enough to shed some light on the insanity, maybe calm my nerves and focus my brain (this next book is very much a thinking book). After writing two other prose works in the last three years--22,000 and 75,000 words--I feel much more confident going in to what will be a 90,000-100,000 word project. Having a poetry collection forthcoming helps the writerly ego, too.

I've been thinking a lot about structure, and a lot about a common criticism agents and presses have of my work, namely that it's too quiet. I'm not entirely sure what it means, but I presume it's a combination of the following:

I'm a poet who loves language, metaphor, and symbol--these are not loud things like characterization or plot or zombie sex. I've written several poetry collections and have a multi genre garden memoir I self published (this still makes me feel sick, so trained I am as an academic, but I had to try something different). Anyway, I was talking about being quiet, and structure--it's important I have a decent idea of structure once I begin writing in January; I'm not the kind of person who does well editing back in structure, it'll just be a nightmare, like building a house from the outside in. Still, structure, like content, is about discovery along the way and things will change, they must change in order to be the drug writing is.

I have several core narratives to the book, Turkey Red:

1) My discovery of my late grandmother and her family, stories I ignored as a child and am searching out now, and a depression-filled relationship with Oklahoma that this book hopes to cure or lessen.
2) The story of Mennonites, from the Netherlands in the 1500s to Prussia in the 1700s to Russia in the 1800s to America in the 1870s. Who they are. Their forced wanderlust and persecution. Their yeoman tendencies.
3) The story of the Southern Cheyenne in Oklahoma, their history as a people from Minnesota and the Dakotas to Colorado and Oklahoma Territory, along with the overall stories of Native Americans in the Territory. Their forced migration and cultural dissolution.
4) Great Plains flora and fauna, with a specific look at grasses, black-tailed prairie dogs, Bison, and horned lizards. The extinct ecosystem. The culture of agriculture and manifest destiny.

Obviously, I could interweave each of the four components--with each having their own stories to tell--letting off of one just as a story came to a head, coming back to it twenty pages later, and thus creating suspense. But that feels.... annoying. And if I talk about all four at once it's too much at one time.

I have a diary of my grandmother's from 1950-1953, where she wrote a few lines each day. I'm hoping this will provide a scaffolding and that I can use her brief words as someone about my age (back in the 1950s), perhaps as metaphor or symbol for my life now in my mid 30s.

During research I was worried each of the four areas were too different, or too alike--it depended on the day. Now I see that they are the right balance of the two, enough to give me symbolic legroom and running space to ramble about myself, my family, my Oklahoma, which should tie everything together as I go along. And this book will have more stories than my last big memoir, Morning Glory. But does that make it a collection or a memoir? I think readers are growing toward the former, especially as e-readers develop, which is also why I have a tendency to play with mixed genre works, and sub genres of nonfiction all at one time.

But again, I worry about being too quiet. There's nothing flashy I discovered in my research. No one in my family was in an infamous outlaw gang. No one made a land run. No one killed an "injun" or worked on the railroad or hunted bison or married a Cheyenne or anything "neat." They lived simply. And this is the Great Plains--simpleness, hardness, flexibility, community, unwavering determination and hope. Tornadoes, fires, floods, and locusts. That's not loud. That's why people look out their plane's window and go "huh, squares, I sure could go for some saltines."

I'll write whatever I write. And it may be a colossal waste of time, nothing but a line on a resume or a footnote to some genealogist 100 years from now. It's something to do. It's something I have to do. It's my field to plow, my bison to shoot, my embrace I can no longer give to people, animals, and places I'll never really know until I grow up and look hard into my own shadow, our country's shadow. I don't see how this is quiet.

(And to tack something on--it snowed 3" on Saturday, see below, and this morning it's -3 outside.) 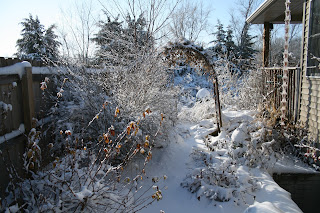 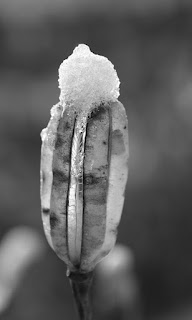 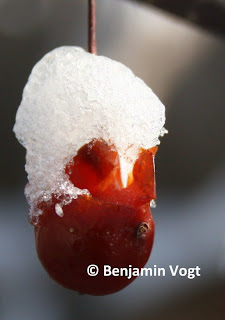 Posted by Benjamin Vogt at 9:04 AM

I vote not enough zombie sex.

Doesn't sound 'quiet' to me. And I'm far from Oklahoma.

K--Oh you. I always know how to get you to comment! Ha.
D--Is it high summer by you now? How hot does it get?

Again- I totally understand! My opus involves my own history, my family's history, Quaker history, women's history in the US since 1642, the westward expansion, slavery, war. I've written journals and poems for a lot of my life, and since I"m close to your grandmother's age, (I'm 80,) that's a lot of words. How to hang it all together! And then the other question, - who would want to read all this stuff? I seem to have a drive to organize it in some literary way, maybe just for my descendants, who probably would like to know the genealogy at least. Well, good luck to both of us! I look forward to progress reports.

N--Yes, you have a heckuva project there, so similar to mine. Important to. The genealogy alone is so much hard work. I like that about using women's history and slavery to help contextualize things. I always think it's so very important in nonfiction to appeal to as many senses as possible: the emotional, the logical, the personal, the public, the lyrical, the reportage, the historical, the private. Bare it all, let nothing alone, strip search life! TSA does it to people your age. :) And as a side note, if only my grandmother were still alive. She'd be 90 next year, and just talking to her the book would write itself, but I can't, and I hate that.

It could get to almost 40C, but today we are grateful for a little gentle rain and it was overcast all day. The sort of weather we often whine about on Christmas Day.

I did begin teasing our family history out of my mother. My father is gone, but my mother can tell me her knowledge of his family history. Just recently we discovered that my mother's London roots include the Hugenots. Would have to go to the London Hugenot library to follow that up one day.