A few weeks back I noticed the first monarch in the garden as she was feverishly laying eggs. I'd never seen one so early--and with last year's Texas drought, continued decimation of milkweed as more land is turned to chemical-ridden big ag, and as the Mexican overwintering forests shrink--I thought it'd be June or later until I saw a butterfly. If you've read my blog for any length of time, you know in what high esteem I hold this insect; it's a symbol for other insects, for ecosystem degradation, and a creature we take for granted. The slow and subtle loss of songbirds is almost imperceptible, but it's real. If you were to go back in time 10, 20, 30 years, the audible difference would be immense. But with the monarch, we're more likely to see the change on an annual basis.

Once the monarch arrived, three baby bunnies followed, as well. I have the chain link fence along the back chicken wired 1/3 up, but they found a small gap where it meets the wood fence. I noticed the gap when I saw a cat chasing a bunny and the feline nearly careened into the black mesh.

Two of the babies left, but the third stayed, devouring young stalks of milkweed of every species. I've lost 50-75% of my milkweed from young plants that don't have the reserves to put out much growth a second time, and will likely slowly die this summer. I raise 100-200 butterflies every year, and each year I run dangerously low on milkweed.

I hated this baby bunny with all my passion. On my daily walk another stand of Asclepias incarnata or purpurascens, and even tuberosa, was nibbled to the ground. Asters? Forget about it. Gone. Only the maturest, fastest growing asters escaped the bunny's reach. I divided a bit of dianthus and it chewed away all the stems. I chased Demon Bunny around the garden, leaping like a long jumper over liatris and coneflowers, stumbling over last year's tall coreopsis sticks and cutting my leg. I just wanted to scare it, make it feel uncomfortable.

It ran under the deck to my super slow compost pile of grass and brush, likely where it spent its nights. I came to know its routine though, its own daily path through the garden. I bought a humane cage and filled it with apples, corn, and carrots, but no go. I tried another more sheltered spot, put in fresh apples, and in two days I had caught my nemesis. What pure joy! 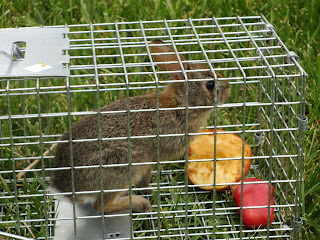 I took it out to a quiet, nearby country road and released it into a thicket of red cedars. And now that I'm free of the bunny, the garden feels empty. Stagnate. Motionless. Soulless. It screams of some great lack.

Why in the world do I feel this sadness? Why does my mind wander, imagining the bunny terrified, uncertain, so alone, perhaps mulled by a hawk or barn cat in a field a mile or two away? For a split moment I thought about going back to the dirt road and trying to get it back, bring it home. Why? Perhaps I'm jealous of how alive it is--its deep biological awareness of the landscape, its fear and fight for survival an echo of my own evolutionary past nullified by air conditioning and grocery stores and ipods.

I walk the garden and nothing stirs. There's no life. Just some baby preying mantises, a few skipper butterflies, a bumblebee or two. The garden is in its late spring limbo, between the first great flush of spring flowers and the summer torrent of color and insect nirvana. Life will return. There are plenty of bunnies in the world. And my garden is a haven for so many other creatures. And for monarchs--I found a few new eggs on the taller milkweed. The absence is slowly filling back in, but it will never be quite the same. I hate that bunny even more for making me feel this way.
Posted by Benjamin Vogt at 10:19 AM

We have the eulogy. And the portrait. Now we need a name.
Spellcheck says Wee Kipa.

That bunny's got you coming and going. Buck up and focus on your milkweed. I planted my first milkweed last year. Only one came back. I'll add some more this year until I have a decent crop and a Monarch environment.

I really like this blog entry. Thanks for sharing your ambivalence. It's a great story.

Diana--Weekipa it is. Sounds exotic!
Kathryn--I found a local place that sells milkweed by the bucket load for $3. I'm ready to dig!
Heather--I like it too. I thought more people might comment. I was thinking of spiffing it up and putting it into an expanded edition of my book.

I really like this blog entry. Thanks for sharing your ambivalence. It's a great story.

LOL! Poor bunny, subject of so many projections. ;) Why not just love the bunny and put him where he can do what he needs to do to survive that does not interfere with what you are creating? Oh, right. You did. Good work. :) Seriously, I do think there is something inherent in moving a critter from one environment to another. The responsibility of changing his life so drastically and never knowing The End of the Story. I re-homed a wild rat in Asheville that was nibbling in my garden. Always left a question mark in my mind (not my heart)...

GCB--Thanks for stopping by! If you come again I'll give you a 10% discount.
Kathryn--Oh yes yes yes. But I have to remind myself, we have PLENTY of rabbits, we do not have plenty milkweed as we dig up and poison it away.

Susan in the Pink Hat said...

Reminds me of reading Stegner's account of his childhood shooting prairie dogs every day digging in their fields on the Saskatchewan prairies. Man v. nature is never cut and dry.