In Praise of Species Coneflowers

When I started gardening in Ludicrous Speed (please see Spaceballs for that reference), I bought all kinds of pretty coneflowers in the local nurseries -- purple, white, orange, yellow, umber, red. I'm not sure any of those are still alive. Well, there is a white one.

Most of these cultivars and hybrids died out within 1-3 years; one constantly got some sort of leafspot, defoliated, and called it quits by August. Most were stunted and didn't bloom all that much. Someone once told me you shouldn't let these cultivars bloom the first year, instead help them work on establishing good roots. But I just don't mess with them anymore -- plus, those frankenflowers like 'double decker' and 'coconut lime' were just the last straw.

Here's an image of a dry corner that's finally taken off this year for me. It took me 5 years to figure out I should just go species, and 1-2 years after planting I'm getting some sweetness: 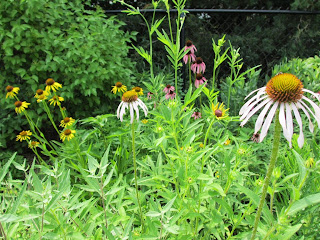 That's Echinacea pallida up front, simulata in back, and paradoza to the left. Now, they all aren't native to Nebraska, but I'm not being picky with my cones -- they still get lots of insects and are robust. Maybe I'm cheating by not going 100% native here, but I think these species are close enough, and a lot closer than mutants, er, cultivars that have been bred to a weaker or unproven form.

I also use Ratibida pinnata, grey-headed coneflower, though you'll hear lots of folks say not to use it in a small garden. Blah. It gently self sows in my THICK, MULCHED garden, and if I don't like a seedling where it is I move it, or easier yet, yank it out. This still leaves you with other Ratibida's and Rudbeckias, so why use cultivars and hybrids? 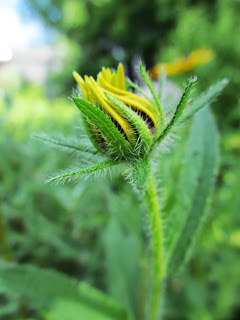 I've also been enjoying Rudbeckia missouriensis this year. No, it's not native to Nebraska, but it grows fast, has lovely blooms in June before the main July show, and I can winter sow it easily. Plus, I've never seen fuzzier leaves, not even on Echinacea pallida, which makes it good for a tactile children's garden. Don't forget Rudbeckia maxima, giant coneflower, with its large blue leaves. Any other suggestions?

I'm with you on the Echinacea cultivars. And I, too, am not being too careful to keep with the local natives. E. paradoxa has been doing beautifully for me, as has E. angustifolia (which is our local native). I'm not familiar with E. simulata. E. pallida hasn't cared for our recent heat and drought.

Rudbeckia hirta occurs naturally in my grassy areas and has handled our heat and drought admirably there. I need to bring it into my flower beds. R. triloba has been around since I first made the beds 5 years ago; it reseeds nicely (almost too much), but it needs extra water and has a whiny way of calling attention to itself by obvious drooping, so I've pulled most of it out. I added R. maxima just last fall and am loving the large, blue-gray leaves and upright form - a nice accent in my prairie beds that otherwise seem a bit too full of "fillers".

Oh yes, R. hirta too! See, there are sooo many good ones, and I know you two are experts with practical experience. :) Who needs weak cultivars?

Great choices...I have Rudbeckia maxima in a couple of spots and it grows like wild!

I love another Rudbeckia~R triloba. I will be glad to share seeds with you. Just let me know. gail