From Larva to Chrysalis in 20 Seconds

Below are images of a monarch larva changing, in 20 seconds or so, to a chrysalis. It was fast and I was not ready with the camera. Luckily, I was in the kitchen near the terrarium, but I had turkey guts all over my hands so missed most of the skin sliding up and off the larva.
The first image shows late last night, where you can clearly see green beneath the larva's skin (yesterday afternoon it spent time spitting out a silk anchor on the stick, then turned around to wiggle its butt on the silk for attachment--it's like french kissing, but the wrong end). Then there are some images of the change this afternoon (notice the dried-up antennae dangling off the skin toward the top). I apologize for the poor quality, again, turkey guts. It was amazing to see the larva writhe and twist both during and after its change. As my wife says, they don't teach you this in school.
The final image is of another chrsyalis we have inside that occured a few days ago--apparently, they need to drip dry, and I thought the green droplets of liquid were very cool. Probably colored by chlorophyll, wouldn't you think? 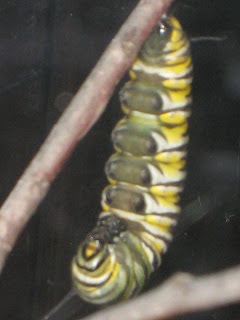 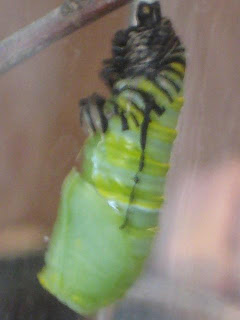 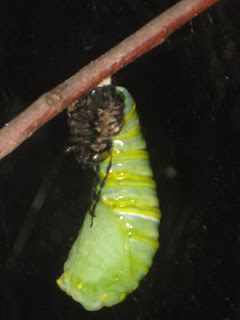 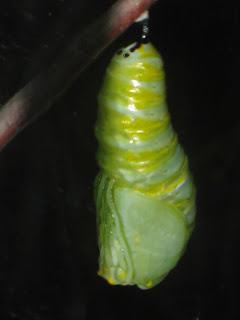 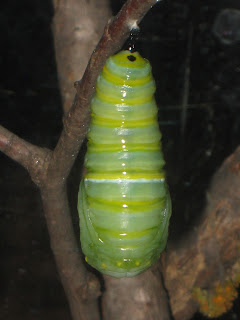 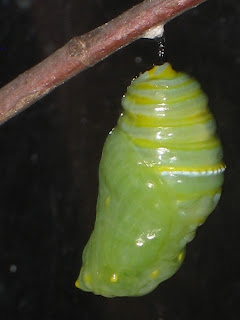 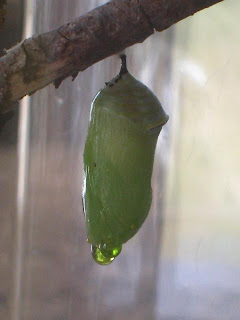 Posted by Benjamin Vogt at 1:53 PM

I've seen a caterpillar turn into a chrysalis only once. It was for a cabbage white butterfly.

But that took place over several hours and it look like agony.

Lucy--This looked like agony, for sure. Last night when it went into its "J," and today when just before and during this. I can't imagine it's comfortable!

Thanks for the insight.

Reminds me of growing up :)

How cool is that? Wow!