You think that if they can just make it past the egg, it'll be ok. Or once they get to the "J" position. Or once they get into that fortress of a chrysalis. Nope.
The first group of images is of a "J" cat I found on a morning glory leaf. Is this a parasite egg hatching going on from some fly or wasp? It's ugly. 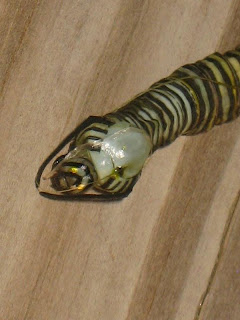 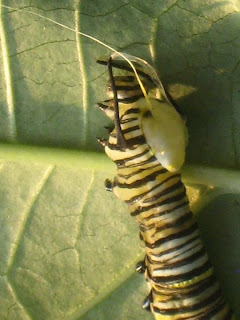 This second group of photos is from the first-to-form chrysalis of about 2.5 weeks ago, also on a morning glory leaf, not far from the previous incident. Yesterday, the wings were becoming visible and it appeared this fellow would come out today. Well, here it is, but in pieces, and with that suspicious green goo which makes me think things happened too early, or there was something seriously wrong inside. Or, did a predator get to it before it could emerge and fly away? Pieces everywhere as if someone tossed a room looking for cash or jewelry. 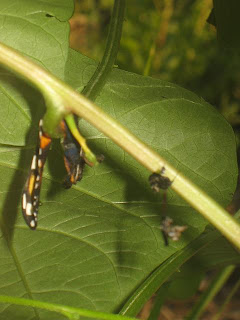 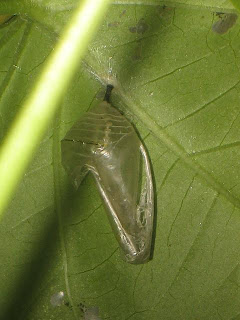 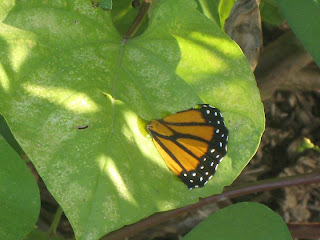 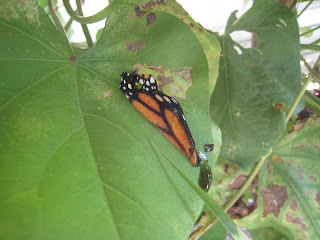 Today I also found one cat, 3rd instar I think, still alive, with its green guts pulled out of its body behind the head like a noodle--did a bird get to work on it? I put it out of its misery, if they feel misery. I sure do. There are two new chrysalides on the deck and stairs, and a cat in the "J" on some Eupatorium. We'll see what happens. About 12 cats left on the red milkweed, and then I suppose the season is over. Not good luck for the dozens of cats I've had the last month. Also saw a cat jump the chain link fence--it was black and white. Feline cat, that is.
Can't end on such a bad note. At least other things seem to be doing well in the garden; the below frog couldn't believe what happened to the monarchs. 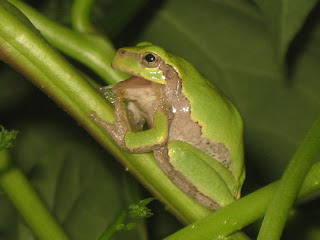 Posted by Benjamin Vogt at 7:24 PM

Seriously, queasiness aside, it was a fascinating post. Thanks.

Wow what I hard time they have making it.

I think the last time Monarchs had such a hard time was during the Russian revolution.

Mr Frog looks like he's laughing. Someone should give him a kiss and see how he does as a Prince.

Thanks for linking the larger images. I enjoy looking at things I can see the details.

Wow... amazing photos. It sure does look like some kind of alien fly is trying to hatch out of the one cat, doesn't it?

I wonder if some of these bad things happen to the cats before they pupate, or while they do? If it's the latter, you could bring them--branch and all--inside. You'd just need some kind of mesh to put over an aquarium or some big glass dish so that they could be released outside instead of flying out free into your house.

omg, this is all too much for me after just seeing the jagged ambush bug kill the monarch on my buddleia. egads. I never knew cats were hosts for parasitic larvae but I should have figured. I wonder if I'll sleep tonight?? on the positive side, you really have a lot of host plants and caterpillars in your yard so I feel better thinking/hoping most of the others will make it??? Don't tell us if they don't....

Eeeewww is right! But that frog is priceless--I'm so jealous. I want one! And of course I loved WiseAcre's comment about Russia...

KD--Computer science? Now THAT makes me queasy.
WA--Don't forget the French. And, I always try to post somewhat larger pics, though it takes longer to upload and makes me feel like being Russian or French.
Kim--WAY ahead of you. I have two chrysalides now, and two other cats--a large and a small--in their own small containers with mesh tops. We'll see.... I just couldn't take it anymore. Do have three chrysalides outside now.
Kathleen--Oh, I've been boning up on all the myriad ways monarch cats can get it; frankly it is plain disturbing. A female lays hundreds of eggs, a few hatch, and then those larva get dead, and.... omg.
OFB--A frog is in the mail. Seriously.