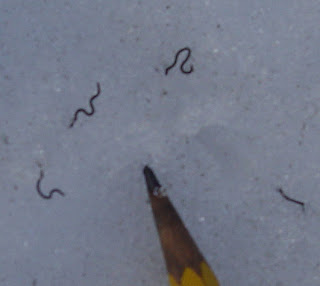 There are worms that live in both glacial ice (one species) and that live in frozen methane under the ocean floor (another species). How cool is that?
The ice worms up in Alaska only appear on the surface at dawn and dusk, crawling their way to snow to feed on algae before the sun hits them: at temperatures above 32 degrees they begin to liquify.
The first species was discovered in 1887 in Alaska's Muir Glacier, where there are thought to be billions of them.
It's not known for sure how they move through the ice--some think they simply crawl through very small cracks, while others believe they secrete some sort of antifreeze. I guess they're sorta hard to study.
And why not make this into an EVENT. Every February since 1961, Cordova, Alaska has held the Iceworm Festival in an attempt to shake the winter blues. How does one DO this though? You guessed it--a survival suit race into the water. And...
--Miss Iceworm Coronation (put THAT on the college application and the ole dating resume)
--Shaving Permits "Buy your shaving permits at local businesses to avoid being jailed! Iceworm trivia: When famed bush pilot Mudhole Smith failed to buy his shaving permit, he was sentenced to shout at the top of his lungs “Fly Frontier Air” ten times on Main Street!" I guess Alaska Air is the only way to go, and if you true Alaskans don't use it, you get tarred, er, wormed and feathered.
--Blessing of the Fleet
--And the local hotel runs a special on rooms for all you out of towners: just stop in at The Reluctant Fisherman Inn (now, is he reluctant because he didn't get his boat blessed, so busy was he worming it up the night before?)
And don't forget to read Robert Service's poem "Ballad of the Ice-Worm Cocktail"
I wonder what glacial ice worm tea looks like... clear? Could you use it in your garden?
Posted by Benjamin Vogt at 7:53 PM