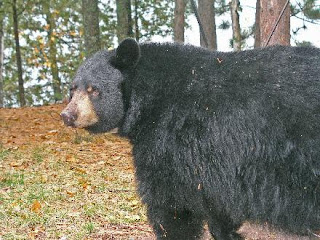 "Solo, the one-eared black bear, is denned up for the winter with two cubs under a lake cabin near Ely, Minn., blissfully unaware she's hibernating on death row.
A Minnesota Department of Natural Resources plan to kill Solo and relocate her cubs, because she's become too familiar with humans in Eagles Nest Township, is dividing residents, many of whom have put out food for Solo and like having her and other bears around.
While an estimated 25 bears live in the township, many residents readily recognize Solo because of her easily recognizable one ear. The other was ripped off when an adult bear attacked her as a cub, killing one of her siblings, said Township Board Chairman Dan Humay."
http://www.startribune.com/local/12579936.html
Well, ok, I see why it's bad to have such animals get too cozy with humans. But I think it's important to keep in mind we're not only in their world as we suburbanize and cabin-ize, but that we share this world. Certain native cultures might say we're on equal or even lesser footing. I'm too romantic--obviously tigers and pumas do not make good pets, but we're not talking pets here. I'm conflicted.
So to calm myself down I went outside before the snow started melting too much and made this (you can see some friends came over to help): 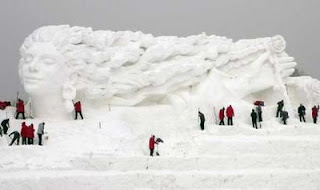 Posted by Benjamin Vogt at 3:09 PM

Oh, very well done with the snow sculpture, Benjamin. With an example like that, surely it's only a matter of time before your neighbors cast aside those pernicious inflatable snow globes and follow suit.

Why is it no one lets me get away with sarcasm anymore? Is it because I'm older? Ah well.

I apologize for my attempt at humor. I meant no offense.

I didn't take any offense at all! Comment postings don't help one show sarcasm in their voices, and sincee I'm already quite dry in my sarcasm, it didn't come through I suppose--so I'll apologize back at ya. Besides, it takes a great deal to offend me, but I bet you knew that? :)