It's cold here, about 14. And by the pics below you can see the "accumulation" of very light precip we've had the last two days. Is it frozen fog? Ice fog? Freezer burn?

"Suppose it is foggy outside and the temperature is 30 F. Fog tends to not produce measurable precipitation by itself but it can still wet and moisten objects. In the case of freezing fog, the fog cloud droplets are supercooled. When a droplet contacts an object below freezing it will turn to ice. When only freezing fog occurs, there will be just about as much freezing of the fog droplets onto surfaces as there will be sublimation from the surface, thus there is not much accumulation of ice. Often freezing fog will be accompanied with freezing drizzle. In that case, a film of ice will coat surfaces.

Ice fog is a fog composed of tiny ice crystals. In the ice fog situation the temperature is becoming too cold for only supercooled water to occur. Ice fog will only be witnessed in cold Arctic / Polar air. Generally the temperature will be 14 F or colder in order for ice fog to occur."

As for the pics, I like to scan the view in wide angle, then zoom halfway scanning the landscape. If I find some texture I like, I'll zoom in a bit more and tighten until I get the appropriate contrast or detail. That's how this amateur works. And yes, these are color images. Expand #2. 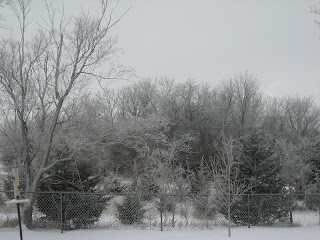 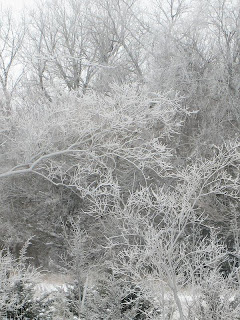 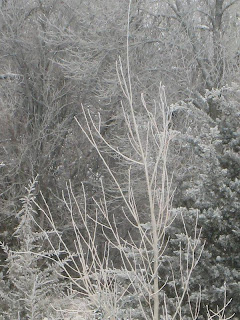 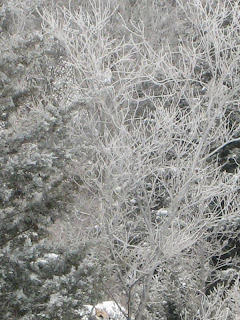 Posted by Benjamin Vogt at 1:13 PM

Thanks for letting me know the second photo expands - it's just beautiful, Benjamin. It made me think of Guenivere riding through the silvered forest on her way to the wedding with King Arthur.

Annie at the Transplantable Rose

Annie--Wow, I never thought of NEBRASKA in such a way before. I have some pics this morning I have yet to upload--the sun finally came out to highlight the nasty ice on everything, and the way it shimmered and sparkled and stung my eyes reminded me of such a gilded age a you mention above (or at least the movie version of such).